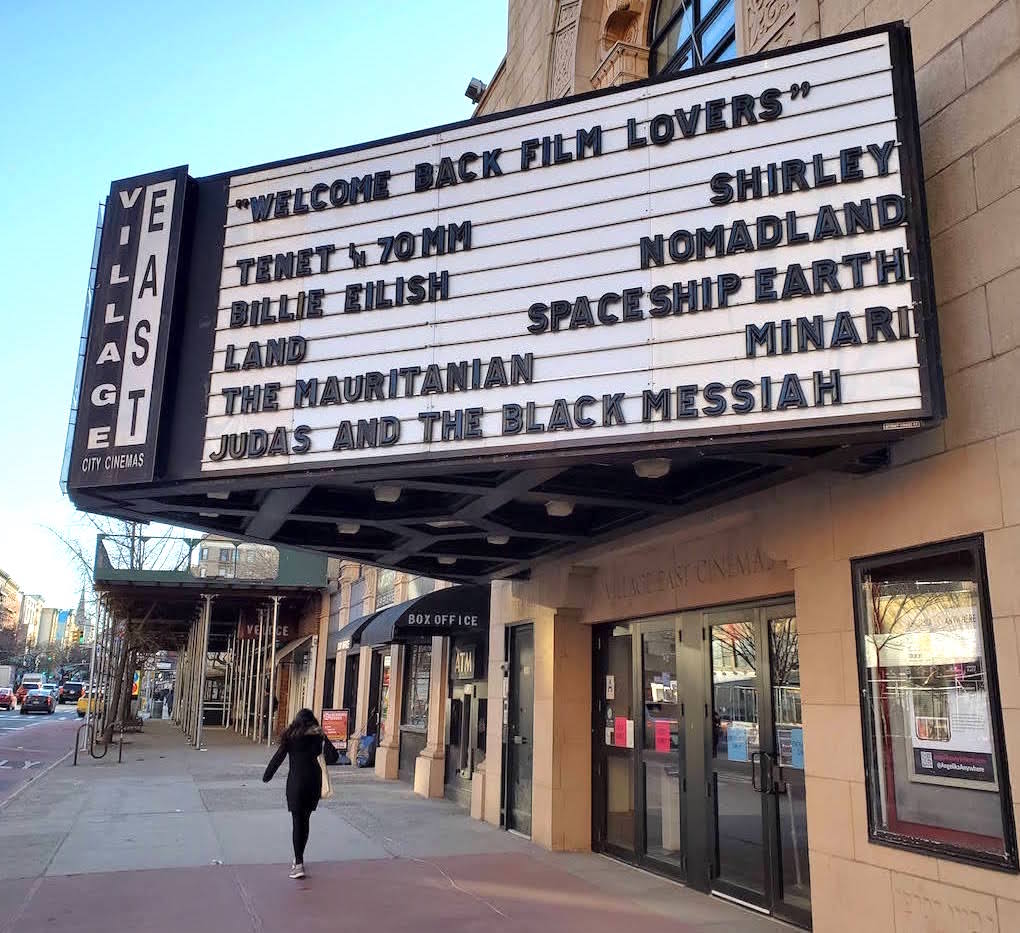 Village East Cinema's marquee had a full lineup on Friday. (Photo by The Village Sun)

Movie theaters in New York City were allowed to reopen on Friday, though only at 25 percent capacity.

Audiences are currently being capped at 50 people, and moviegoers must wear masks, except when eating, and must stay in their assigned seats.

Not all cinemas are reopening right now, however, with some operators choosing to wait until it’s more profitable to do so.

Village East Cinema, at 12th St. and Second Ave., was among those back open for business Friday. Around 4 p.m. on the frigid afternoon, a man briskly strode up on the sidewalk, leaned back and snapped a photo of the marquee with its celebratory “Welcome Back Film Lovers” banner, then eagerly hustled inside to see his movie.

Inside the ticket window, a manager was wiping down the surface in front of him with disinfectant. He declined to have his photo taken but said business on the first day back had been “pretty good.”

The Village East Cinema was originally built as the Louis N. Jaffe Theater, presenting serious theater in the erstwhile Yiddish Theater District. Today it is owned by City Cinemas, which is part of Reading International.

“We strongly feel that reopening our cinemas, albeit at a reduced capacity, starts bringing back folks into our cinemas,” Scott Rosemann, Reading’s eastern division manager, told The New York Times.

Angelika is also part of Reading, and Village East Cinemas’ programming includes movies that opened at the Angelika, at Houston and Mercer Sts.

Also reopening on Friday was the IFC Center, at W. Third St. and Sixth Ave., and the Quad, on W. 13th St. between Fifth and Sixth Aves.

But among those silver screens still dark, the Times reported, are Film Forum, on W. Houston St., between Sixth Ave. and Varick St., and Anthology Film Archives, on First Ave. at E. Second St.

Film Forum has announced it will reopen on April 2.

Karen Cooper, Film Forum’s director, told the Times, “It’s totally not economical [to reopen at 25 percent capacity]. It’s a bigger money-loser to be open than to be closed. But the bottom line is, we’re a nonprofit. We exist for a purpose. We really believe that our job is to show these movies.”

As for the large chains, Regal movie theaters, including the multiplex at Union Square, have not reopened yet, according to the chain’s Web site. But AMC cinemas in Manhattan are back open.