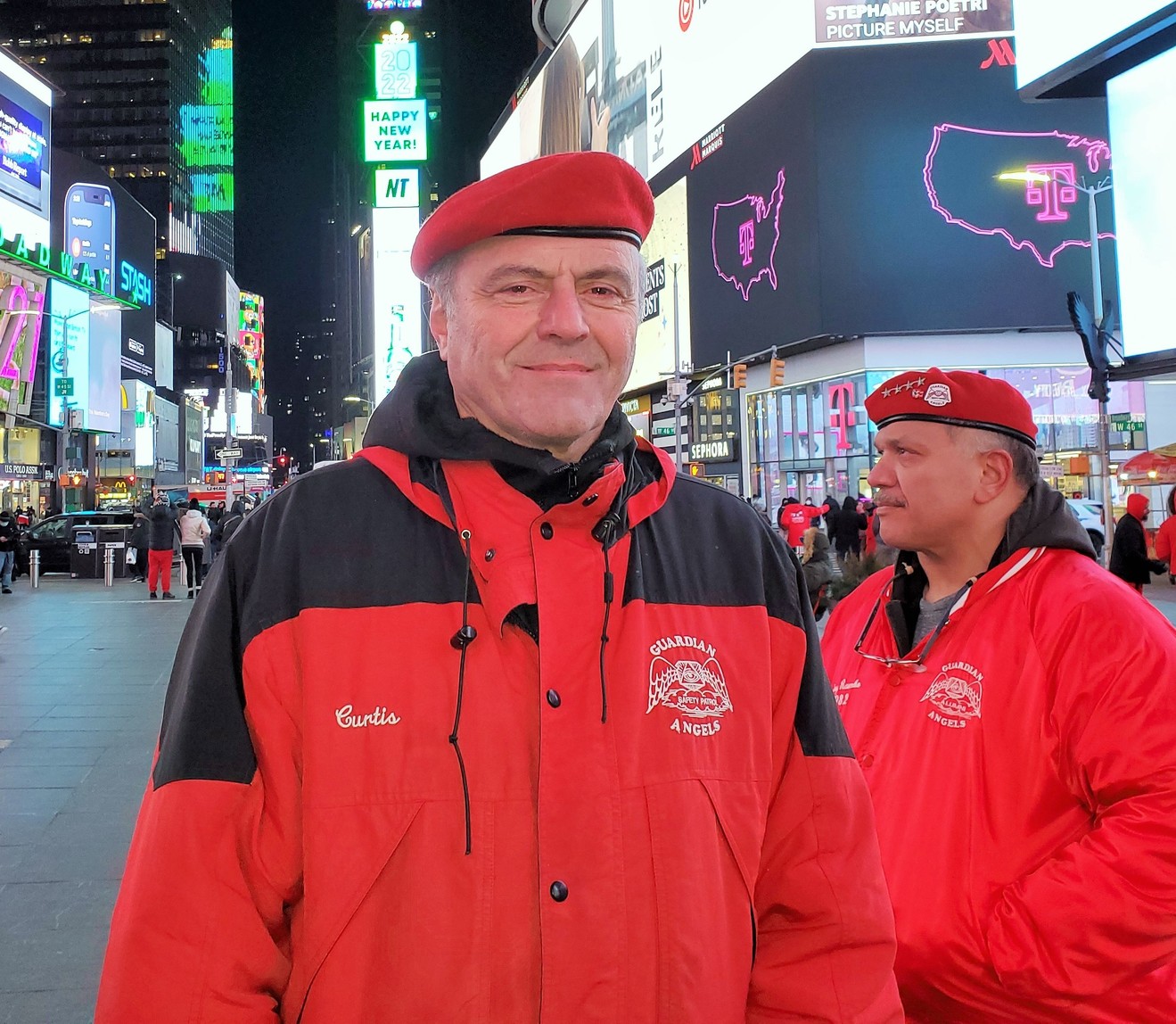 Curtis Sliwa in Times Square on Jan. 18 at the memorial rally for subway-shoving victim Michelle Alyssa Go. (Photo by The Village Sun)

FEAR AND LOATHING FROM LAS VEGAS: How can Curtis Sliwa, on his WABC Radio talk show, possibly keep praising Rudy Giuliani? Doesn’t he get it that the Donald Trump attorney has been subpoenaed by the Jan. 6 investigation committee? But, no, Sliwa keeps right on calling the former mayor his “goombata cheech,” i.e. good buddy.

This is the question, at least, of John Penley, The Village Sun’s Las Vegas news tipster. The transplanted East Village radical used to dig listening to the late Bob Fass’s countercultural WBAI show — but now, as unlikely as it might seem, he’s hooked on Sliwa’s.

“Rudy was in the war room!” Penley stressed to us. “He and Steve Bannon were at the Willard Hotel!”

He was referring to the so-called “command center,” where top Trump cronies plotted how to overturn the 2020 election results leading up to and during the Capitol riot.

But as Sliwa explained to us, as he sees it, he can compartmentalize the two Giulianis.

“I’m a never Trumper,” he told us, noting he never voted for the election results-denier in chief. “But when it comes to city issues, when it comes to public safety, nobody knew the intricacies of how to get things done better than Rudy. When you talk about Trump and voting irregularities, and running around the country trying to overturn elections, I’m not on the same page [with Giuliani]. … Rudy, we’ve had that discussion.

“As a Republican, I’m not supporting him,” the Guardian Angels founder added of The Donald. “I’m supporting [Ron] DeSantis or any other Republican who emerges.”

Sliwa was off the air for a while, having to take a leave of absence to run for mayor, but he recently started his show back up again.

These answers might not satisfy Penley, though, who was blasting Sliwa and Giuliani on Facebook on Saturday evening.

“I listened to Curtis Sliwa’s radio show, which is back on WABC overnight, early this morning,” Penley posted. “I knew about the NYC Police shooting yesterday and wanted to see what he and his callers were saying. First, despite railing on about LAW AND ORDER, Sliwa continues to promote Rudy Giuliani and ignores the crimes that Giuliani committed during the attempt to overthrow American Democracy. It also seems that Sliwa and his listeners were using the shooting to promote Republicans, and were secretly glad to use the shooting to promote a political agenda and were not unhappy it happened.”

Sliwa, also on his show, is promoting Andrew Giuliani’s campaign for New York State governor. By the way, Rudy Giuliani also has a show of his own on WABC Radio.