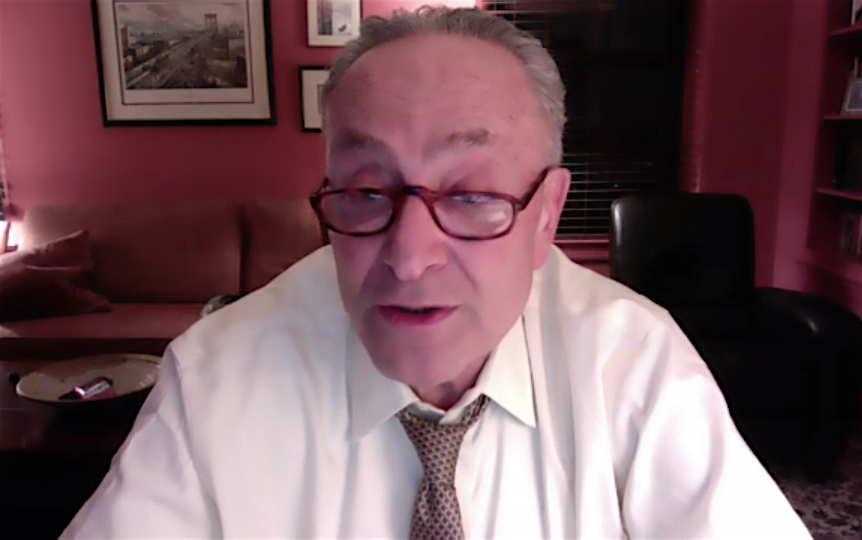 Senator Chuck Schumer speaking with Community Board 2 on Feb. 18. (Photo by The Village Sun)

He gave a Washington report — slamming “beach bum” Ted Cruz and opining on the G.O.P. Senate picture post-Trump presidency. He also engaged in a lively question-and-answer session with board members on any and all subjects — from hyperlocal issues to the future of Facebook. He even pledged to try to get the feds to give up a Soho parking lot for a site for affordable housing.

Of course, Schumer weighed in on Cruz’s shockingly jetting off to Mexico while his Texas constituents froze without power, with at least 30 reported deaths.

“This right-wing nasty bastard, in the middle of Texas’s greatest crisis, went to Cancun,” Schumer jeered. “And they caught him, so he had to slink back.”

Asked whether the Senate Democrats and Republicans will be able to work together to heal the country and actually get things done, Schumer said it’s too early to tell.

“Will he fade?” Schumer asked. “I don’t know the answer. If he fades, we will be able to work with them. If he doesn’t, it will help the Democrats.”

C.B. 2 member Rich Caccappolo, the chief operating officer of MailOnline, the Daily Mail’s Web site, asked the senator if the feds plan to rein in Facebook and Google, which both have offices in the community board district.

“Yes, I think Section 230 needs change,” Schumer said. “Yet, no one has come up with a satisfying way to change it. ”

Section 230 of the Communication Decency Act shields social-media platforms from liability for their sites’ content, the rationale being there is way too much material being posted on Facebook, Twitter, YouTube and other platforms every second to be vetted.

“Our news media has editors,” Schumer said, listing the major TV networks and The New York Times, among others. “Even the New York Post has editors. But Facebook, Google has no filters. Anything goes there. Section 230 says if you are a platform, social media, you can’t be held liable. It lets Trump lie, the anti-vaxxers… . You don’t want to give Mark Zuckerberg and Google all that power.”

Schumer offered one possible solution he is mulling: “What if you require people to identify themselves? That might limit [the fake news and disinformation], without impacting freedom of speech.”

C.B. 2 member Scott Sartiano, the founder of the new Zero Bond private members club, asked Schumer what can be done about the Payment Protection Program, in terms of making it fairer for New York City businesses. As Sartiano noted, the cost of running a business in Gotham is up to 30 times higher than in the rest of country, largely due to the high rent.

“Also, we’ve been closed much longer,” he added.

Previously, 75 percent of PPP money had to be spent on employees’ salaries, while the remaining 25 percent could be used to cover other expenses, including rent.

“Frankly, a lot of the unions wanted it all to go the workers,” he noted.

He added that all the funding from the Save Our Stages Act, for entertainment venues, on the other hand, can be used for anything. But the majority leader noted he had to battle to get Republicans to cough up any bucks for Broadway since their opinion was, “no, it’s fancy.” He also fought for moola for museums.

Jeannine Kiely asked him if, “given the scarcity of government-owned land, particularly in Lower Manhattan,” affordable housing could be developed at 2 Howard St., which is currently a Department of Homeland Security garage. The board’s request was also included in its December resolution on the Soho/Noho upzoning plan, which it sent to Marisa Lago, the chairperson of the City Planning Commission.

Schumer said yes, adding that, as the new majority leader, he has more influence.

“I will help you,” he told Kiely. “One of the advantages of being majority leader is I have some clout, not just legislative. I will work with you and your board. We will try to get [the General Services Administration] to give up the land. We need more affordable housing.”

On immigration, Schumer predicted there would soon be a path to citizenship for 11 million undocumented individuals.

“Because the business community is desperate to get immigrants,” he said.

Speaking of community, Schumer said he feels it’s important to make the rounds of the community boards, and that he visits them twice a year.

“If you don’t talk to people and you stay in the Washington bubble, you can’t be effective,” he said. “I get great ideas from doing these meetings.”

Schumer was down to earth and casual as he spoke with the local board members, belying his lofty position. The Brooklyn native is the first New York-born Senate majority leader and the highest ranking Jewish politician in U.S. history.

“My father was an exterminator, never went to college,” he said of his 97-year-old dad. “Here I am, majority leader. So, that’s not bad.”