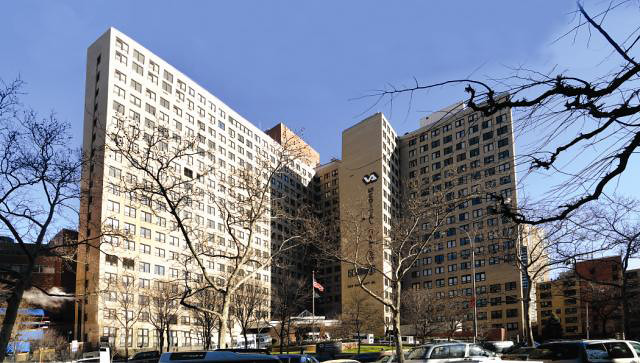 BY THE VILLAGE SUN | The feds’ plan to shut the V.A. Hospital on E. 23rd Street and another one in New York City in Brooklyn is not going anywhere, Senate Majority Leader Chuck Schumer vowed at a protest on March 27.

Washington says that due to a decreasing number of veterans in the area, among other things, it makes financial sense to shutter the two hospitals, as well as a number of others in the tri-state region.

The Department of Veterans Affairs has drafted an 82-page plan supporting the closures. But at the Manhattan press conference last month, held in front of the hospital, just across the street from Peter Cooper Village, Schumer held up a few pages, calling it “the plan,” then physically tore them up.

“Here’s what we’re going to do to it,” he said, ripping the document in two.

“It’s over!” Schumer proclaimed. “Now we’re going to sign the petition [against the closure].”

The senator held similar rallies at other V.A. Hospitals in the tri-state area threatened with closure, at which he again ripped up the plan.

“It’s gone,” he said at another ally after tearing the pages in half.

According to news reports, though, the V.A. doesn’t intend to pull the plug on the hospitals immediately, and is instead saying it could be “years away,” plus will be dependent on Congress.