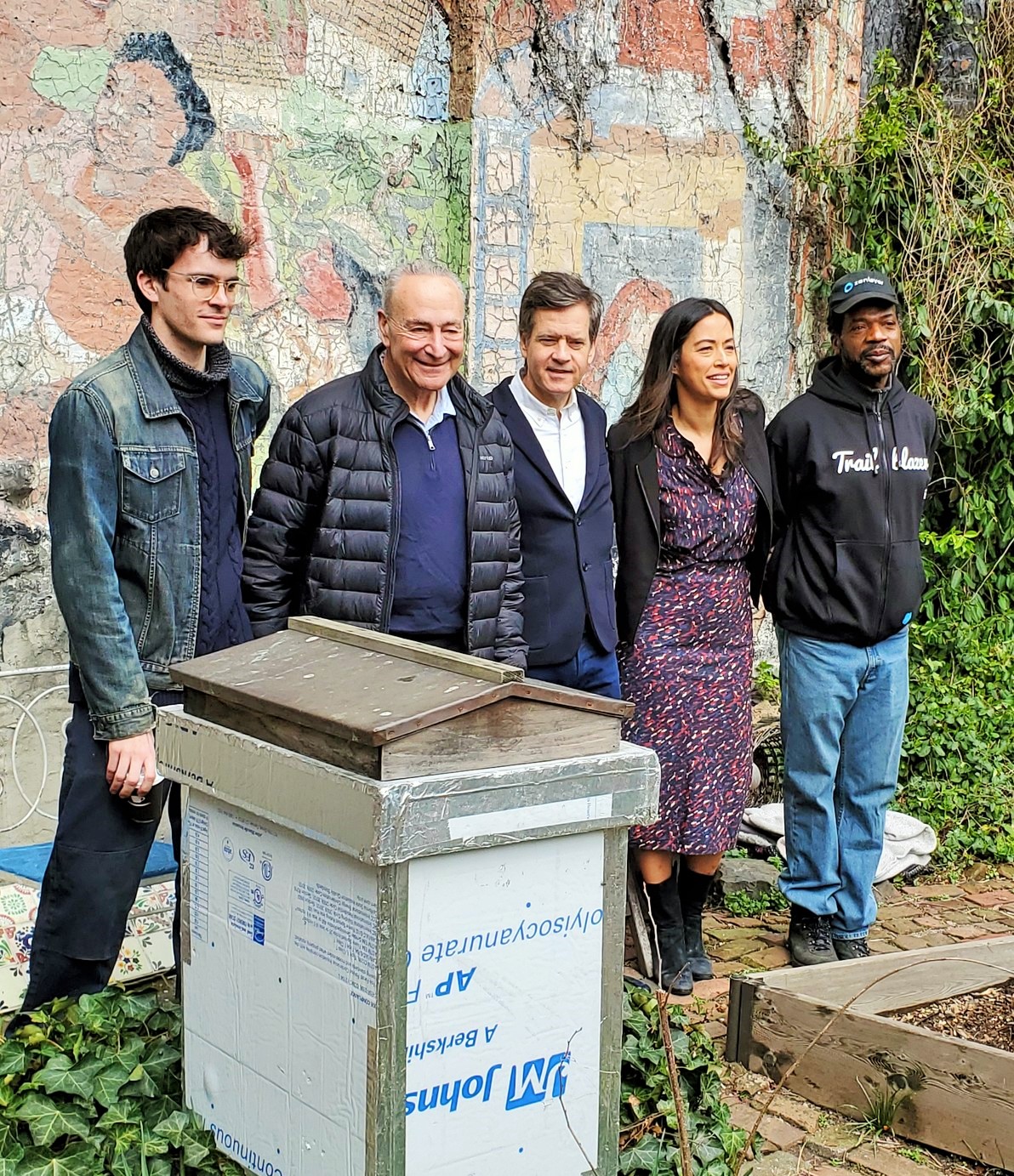 BY LINCOLN ANDERSON | Senator Chuck Schumer got a taste of La Plaza Cultural, literally, on Friday when he toured the East Village green oasis and sampled some of its edible plants.

The Senate majority leader was joined by Councilmember Carlina Rivera and state Senator Brad Hoylman, along with gardeners and advocates, as he hailed the allocation of federal funding for the city’s community gardens. The money was included in the recently passed $50 billion Bipartisan Infrastucture Law and will go toward the city’s 260 existing community gardens.

“The community gardens have done so much,” Schumer said. “These gardens, they’re not only beautiful and a place when people can come and relax and enjoy themselves, but they also absorb. Some people think that without our gardens, our sewers would be overflowing.”

The senator said the funding in the law falls under the category of “watershed infrastructure.”

He noted that the law also includes federal money for removing lead pipes and also for providing broadband.

“What about the people that can’t afford the 70 bucks a month [for Internet service]?” he noted. “The wires are right there in the street.

“There were a lot of things in that bill,” he added, “but the best was the community gardens.”

Rivera said that during the disaster of Hurricane Sandy, it became clear that the popular garden, at Ninth Street and Avenue C, required some upgrades.

“We needed support for irrigation,” she said. “We needed more bioswales.”

Bioswales are channels for stormwater runoff that also remove debris and pollution.

The councilmember added that La Plaza is a place of “intersectionality,” where the food insecure, for example, have been able to find nourishment and where the arts and culture also have flourished.

She also noted that the space’s full name, La Plaza Cultural de Armando Perez, honors the late artistic director of the former CHARAS/El Bohio cultural and community center, which until late 2001 occupied the old P.S. 64 building down the block nearer to Avenue B. For two decades, the old school has sat vacant as the community has battled a developer’s plans to turn it into a dorm, among other schemes.

“This garden is named after someone who wanted to restore CHARAS to the community — that is the work ahead of us,” Rivera declared.

At one point, Schumer asked Rivera if she had enjoyed the garden as a child. But she said no because the neighborhood was rougher back then and her mom had been concerned about her safety.

“Community gardens are so special,” Hoylman said. “They are the lungs of our local neighborhoods. They provide respite and solace.” He thanked Schumer for securing the funding and “bringing it home.”

Charles Krezell, the president of LUNGS (Loisaida United Neighborhood Gardens), recalled that some people cooked their food in La Plaza after Sandy.

Other speakers included Sarah Williams, executive director of the Green Guerillas, which was started by Liz Christy in 1973. The group’s early members would throw soil-and-seed balls into vacant lots to make them bloom. Today the community garden at Houston Street and Bowery bears Christy’s name.

Like Rivera, Wiliams noted how many different things go on in community gardens, such as coat-collection efforts and back-to-school drives. She added that all the gardeners are volunteers.

Despite the good news on the federal funding front, Sherrise Palomino, director of advocacy at New Yorkers for Parks, pointed out that, after two rounds of cuts since January, only about 0.5 percent of the Big Apple’s budget is currently allocated to parks.

“Eric Adams campaigned on 1 percent and we want to hold him to that,” she said.

Michael Hinds, La Plaza Cultural’s treasurer, said the garden’s current big project is to finish its new “solar pavilion.” Looking like the framework of a large cabin, the structure, which has already been built, is made of sustainably harvested timber from Upstate. Eventually it will sport special fabric solar tiles mixed with a green roof. A grant supported the pavilion’s construction this far, but more funding is needed to finish the job.

The garden’s other big need, Hinds said, is for its own proper water connection. Currently, water is collected in rain barrels and the garden also taps into a fire hydrant out on the street.