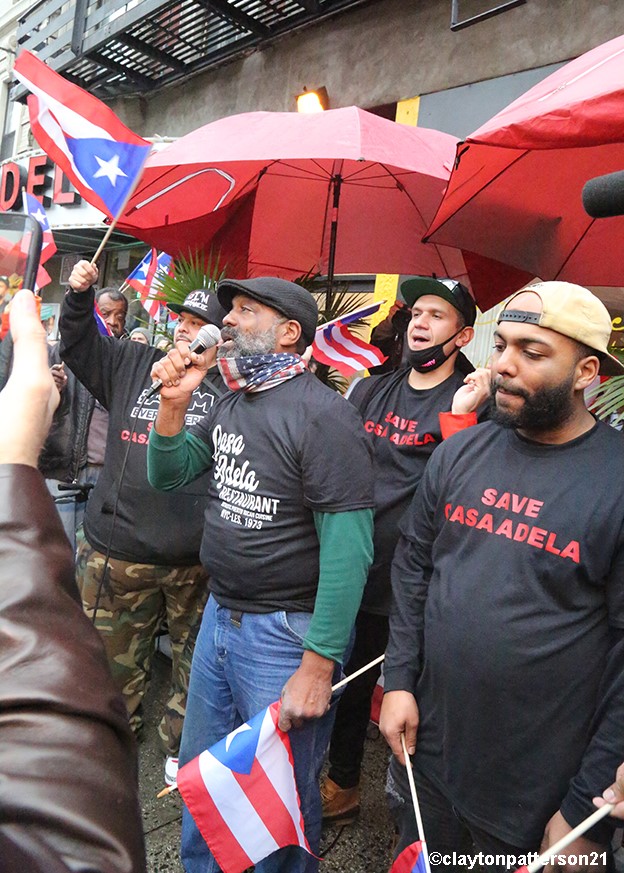 Luis Rivera, the owner of Casa Adela, and supporters rallied on Sat., Dec. 11, to save the restaurant from a major rent hike. (Photo by Clayton Patterson)

BY BONNIE ROSENSTOCK | On Saturday morning, Dec. 4, hundreds of people gathered in front of Casa Adela on Avenue C in a lively rally to save the beloved Puerto Rican restaurant. The Loisaida staple is facing a huge rent hike that could force it out of its longtime home.

Three days earlier, a two-and-a-half-hour meeting was held at the office of Assemblymember Harvey Epstein to try to help negotiate a better deal. In attendance were restaurant owner Luis Rivera, Epstein and City Councilmember Carlina Rivera and board members from the limited-equity, nonprofit Housing Development Fund Corporation for 66 Avenue C, the building that houses the restaurant, plus the parties’ lawyers, the latter who joined via Zoom.

A week before that, a lineup of community activists, concerned neighbors and supporters had gathered together at the restaurant to create the ad hoc Save Casa Adela Committee, which is dedicated to preventing its closing.

Casa Adela, the neighborhood’s preeminent — and only remaining — authentic Puerto Rican restaurant has been a fixture on the Lower East Side since it opened in 1976. With its beloved founder/owner Adela Fargas at its helm as chef, greeter and mother figure, the restaurant, located at 66 Loisaida Avenue, between Fourth and Fifth Streets, has fed generations of Boricuas through good and bad times. She died in the restaurant on Jan. 15, 2018, just shy of her 82nd birthday.

“My mother never gave up on a day’s work,” said Luis Rivera, 63, who is now in charge of the place’s care and customers, along with his wife, Maritza Lopez, and their son, Luis Rivera, Jr. “She was working that day, had an aneurism that went to her brain, she stood up and leaned over,” he said, demonstrating her bent-over-at-the-waist position. “I’m pretty sure that’s how she would have wanted to go.”

But now the restaurant itself is in danger of demise. In a press release, Rivera explained that their old lease expired a few years ago. Under it they were paying $1,350 a month for the 715-square-foot space. They offered to the landlord that they would start paying $3,000 a month, plus 3 percent increases every year for 10 years. The landlord refused.

Instead, the H.D.F.C. demanded $4,000 in year one (backdated to August) and $6,750 starting in year two, plus 3 percent increases after that, adding up to a more than 480 percent increase in rent. Rivera further states that the landlord refuses to negotiate and has started a court action.

“I’m very disappointed they don’t want to work with me,” Rivera told this reporter. “I’ve been a model tenant; there are no people doing bad things in here. I understand they are going through a hardship, as well,” he said of the H.D.F.C. “If they want, they can throw me out instead of increasing the rent. I have been asking for a meeting to negotiate, and they refuse to meet with me until court.”

At one time, the H.D.F.C. even told him he could start selling beer and wine to cover the increase.

“But I’ve never sold that,” Rivera said. “I’m a rice and beans person. I am not going to pay the rent like that. Besides, the [liquor] license for the Lower East Side is impossible to get. It’s oversaturated with bars and people hanging out in the streets. You have to go through the community board and find out if the building is allocated for this purpose.”

The press release further states that a COVID-related state law protects businesses that have been financially impacted by the pandemic.

“We have filled out the required paperwork for that to apply here,” he said. “But the landlord is claiming the business didn’t [suffer] an impact and lied on the form.

“But there is no law that protects businesses from 480 percent rent increases, though we are part of an active campaign for commercial rent stabilization,” he added.

Chris Lacass, a small business advocate with Save Our Storefronts, was the moderator at the Dec. 2 meeting at the restaurant.

“From our perspective, Save Our Storefronts,” Lacass said, “the story that Luis is telling is the story of immigrants, people of color who own businesses in the city, especially through the pandemic with their landlords, banks and creditors, getting worst terms, higher interest and losing their ability to negotiate.”

He pointed out that the building that houses the restaurant started as a squatter building.

“The people who live and run this building went through that and got help from many of the same rent regulations and city policies,” he said. “It’s so unusual to have a storefront that exists for that much time; even 10 years is unlikely. This business is a success, and we need to save it. On a policy level that’s what we need to be thinking. Also, to convince the people who live in this building that it’s the wrong decision to make.

“It’s not an isolated incident,” he stressed. “It’s happening all over the city. So many small businesses are so ground down by the pressure on them.

“Our overarching objective,” he said, “is to reach the landlord and negotiate something fair before the court date,” which had been set for Dec. 11.

Frank Gonzalez, owner of Loisaida Realty, located at 428 E. 10th St., has been doing real estate in this community for more than 15 years and can’t understand the prohibitive increases over past 13 months.

“I’ve never seen that before,” he said.

His family has a long history with Casa Adela, going back to his father, who is now 90 years old and still in the neighborhood. He related that in the 1970s, before his father met his wife (Gonzalez’s mother), he wasn’t doing too well.

“Adela used to feed him,” he said. “She fed the neighborhood when it wasn’t desirable at all. She was here, serving the community. Then Sandy hit, and she served the community. The history this place has, to lose it to gentrification, who could afford this increase?”

“It’s more than a restaurant,” he said. “The community is behind Adela, not just the local community of the Lower East Side, but also the diaspora. This is a cultural institution more than just a restaurant. Coming here from Puerto Rico, this is one of the first places the Puerto Rican community told me to go. It’s not just to get a good meal, but to look at the history of when there was nothing else in this neighborhood. It’s about a community and what this institution represents.”

However, in a statement to The Village Sun, Gregory Byrnes, the attorney for the 66 Avenue C H.D.F.C., said the purpose of this type of housing model is to assist low-income residents not small businesses. This is spelled out in the deed and housing charter, he said.

“The sole purpose of the H.D.F.C. is to provide housing for those of low income — which this building is undoubtably filled with,” he said.

He claimed that while Casa Adela has benefited from a low rent since 2000, this has deprived the building of needed income during those years. He said that, due to the favorable lease, the restaurant has been paying $60,000 less per year than it should.

“This has put the building in dire financial need — they can’t even afford a property manager or superintendent and have capital improvements that must be performed,” Byrnes argued. “The board president has to essentially run the cooperative as a second job because of this — all for free.

“Casa Adela was offered a lease with a one-year transition period to be at 90 to 95 percent of market rent,” he continued. “They are demanding a lease at 65 to 70 pecent of market rent. For every dollar that goes into Luis’s pocket, that is one dollar you are taking from the low-income, senior citizens and disabled in this building — which is most tenants in the building. The way I see it, Luis and this coalition of people are fighting the low-income, disabled and senior citizens of the Lower East Side. They want these residents to subsidize their businesses.”

The committee working to save Casa Adela contracted artist Danielle Mastrion from Thrive Collective, a local nonprofit mentoring organization in the arts, to create a mural of Adela earlier on the Saturday of the rally. It can be seen on the corner of E. Fifth Street and Loisaida Avenue, on the gate of Five C Cafe, a Black-owned business.

The committee is also planning to petition to get E. Fifth Street named Calle Adela.

While a new court date is scheduled for Jan. 9, all the parties are still talking.

“Harvey and Carlina feel they are close,” Gonzalez said. “We are trying to work out a deal and get them a new, fair, long-term lease, so that Casa Adela can stay there for a few more generations.”