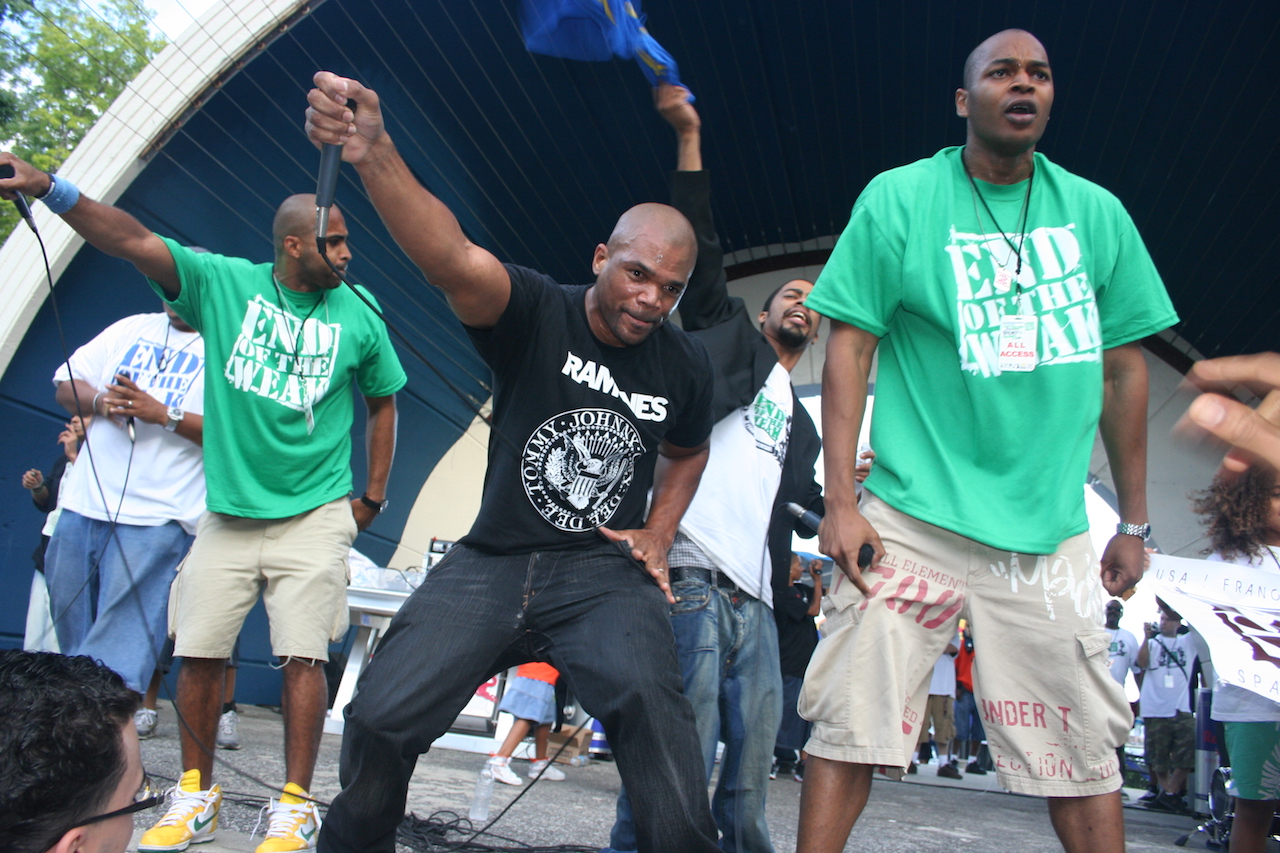 DMC and End of the Weak performing at the East River Park amphitheater in 2008. (Photo by Kevin Harris)

BY KEVIN HARRIS | We DEMAND that the East River Park amphitheater, where legendary artists performed at the epic “Wild Style” event be saved, replaced and enhanced.

Make it bigger, better and focused on the community you serve!

This call to action, this demand with purpose is charged and laid at the feet of the current Manhattan borough president, Gale Brewer.

To begin, it is understood that the world is upside down and the city is doing remarkable work in keeping everyone safe, moving forward and thriving. Respect.

Now, you can multitask, that’s what the job is about. Your administration had no problem selling off and removing what is considered the “holy grounds” of priceless  Lower East Side arts and culture, no problem in the re-planning and redesign of that space, of eradicating all aspects of the beloved, routinely used structure, for the benefit of others outside of the district that you represent. This is a call of allegiance: Whom does your administration serve?!

The plan developed under your purview, has already let down members of the community who have continually protested these changes, were under undervalued, not heard, pushed aside. The silence in your administration’s response in relation to what is happening to the East River Park is deafening, considering you represent us.

Let’s get to the crux of the matter, elevating the area 8 to 9 feet or what’s recommended for environmental purposes at this point does not have to mean that the amphitheater structure cannot be replaced! For that matter, your administration should support constructing an enhanced amphitheater.

What’s behind the idea of destroying this historic amphitheater? To erase, to gentrify what rich developers consider an eyesore because people of color primarily utilize it? Why would you tear down a historic iconic cultural structure valued by millions across the world for its historical musical value?!

In a previous article, I laid out an economic argument for why all of the intellectual property that has been produced by hip hop on the LES by its legendary artists and those artists that rocked the historic “Wild Style” event (a pillar of all hip hop culture) has already produced billions of dollars and will continue to generate a consistent international income stream well into the future.

Given how the amphitheater is such a touchstone, so important to the fabric of the entire city and world at large, this plan is stunningly idiotic, narrow-sighted and plagued by poor community planning. And considering the location, above all, let’s call this plan what it is: biased and racist toward the low-income, working-class individuals, particularly the people of color living in the area.

An area that can be “grabbed,” as Trump would, without adequate reason or explanation and without interest to whom you’ve abused. Your office can find a solution, figure it out. Finding the monies to replace the structure should be easy for the City Council and committee of developers, considering both entities voiced a concerted approval for the East Side Coastal Resiliency plan, which would bury the park and raze the existing amphitheater.

To the leadership of the Henry Street Settlement, in a word: tone-deaf! The “Well of Hip Hop,” the amphitheater is roughly four blocks from where you stand. You are a beloved institution whose work within the community is unparalleled, yet I also have to call your organization to task. Expressly, for also not valuing the intellectual property produced locally. I am speaking from the “lens” of being the first filmmaker of color to have premiered a film at the Henry Street Playhouse (Sept. 29-30, 2006). It was the first time since the 1930s that a film actually was screened there. A screen had to be purchased, because the Abrons Art Center would only accommodate plays.

Considering the funding it receives, who does the leadership of the Henry Street Settlement represent? It’s hard-ball time: Unlike Lillian Wald, who started alternative theater on the LES, the Abrons Art Center has not supported LES hip hop intellectual property produced in the village that it’s supposed to support.

The center hosts no static, exclusive point of reference that displays that the art form ever existed in the neighborhood. In short, the Abrons Art Center also doesn’t support any aspect of an international art form developed within its own “house.” Not to set up a permanent exhibit to the legacy of “Wild Style” and LES hip hop can also be considered highly biased on the center’s part, considering that its programs cater to kids of color.

Suggestion: Get help setting up a permanent exhibit; it will only go up in value. Collect hip hop-related items for archiving from existing legends still around, and include the photo catalogue of Clayton Patterson of The Outlaw Art Gallery because he took the time to “capture” generations of early hip hoppers on the LES, which features a large percentage of people of color throughout the community. Reach out to people like Martin Medina of Why Not Care, Ian Knife of RAGS and activist/DJ Pat Guevara, all who have experience in this area and can represent the art form at its brightest and best.

Borough President Brewer, this is something that has to be achieved. Consider it a contribution in extending your internal own art collection by preserving the intellectual property of the community you serve. Either you own your own art or someone else will… .

Again, this is a call to action for Borough President Gale Brewer and the East River Park development entities that created the plans to eradicate the last remaining historic amphitheater in the city to stop!

Reconsider and re-plan and enhance the East River Park amphitheater!