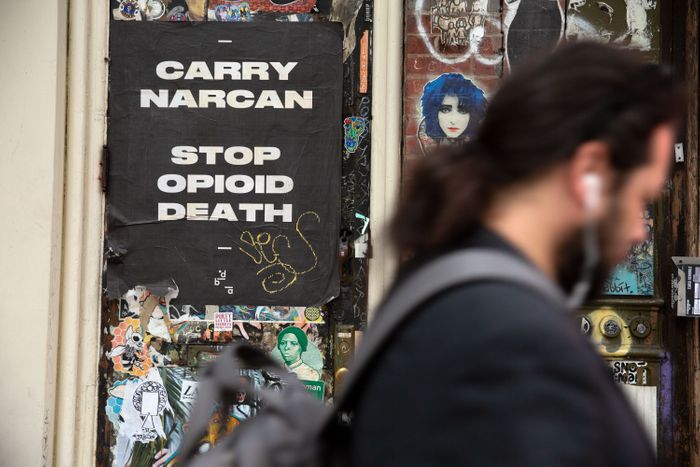 October 12, 2019
BY ROSA GOLDENSOHN AND JOSEFA VELASQUEZ / THE CITY | Mayor Bill de Blasio last year backed the idea of a research pilot program that would allow four safe-consumption sites to open in the city — two in Manhattan and one each in The Bronx and Brooklyn.

But the state has balked — pointing to the Trump administration’s lawsuit against an injection facility proposed in Philadelphia by the nonprofit group Safehouse.

That suit was dismissed Wednesday by U.S. District Court Judge Gerald McHugh of the Eastern District of Pennsylvania, who ruled that Safehouse could open a facility, the first of its kind in the United States. The Justice Department has vowed to pursue an appeal.

Jonah Bruno, a spokesperson for the New York State Department of Health, said the agency is reviewing the ruling “and will consider how it may affect efforts in New York State to operate safe injection facilities here.”

Meanwhile, De Blasio’s office reiterated its support for the centers and looked to Albany for action.

“We have a moral obligation to save lives and connect people to treatment,” Avery Cohen, a City Hall spokesperson, wrote in an email to THE CITY. “These overdose prevention centers have a record of success, which is why we have asked the state for authorization to move forward with our pilot program.” 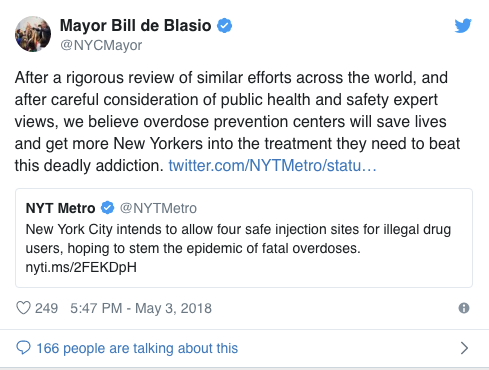 “This puts the ball steadfastly back in the governor’s hands and really pushes him to take action to approve overdose prevention centers right away,” she said.

The Cuomo administration had repeatedly pointed to the federal action in Philadelphia as a reason to wait before green-lighting the centers in New York.

State Health Commissioner Howard Zucker testified at a February budget hearing in Albany about the concern of federal legal challenge.  A  Cuomo spokeswoman cited similar concern at the time, and a Cuomo spokesman referred to the Safehouse lawsuit on Twitter as “the thing that @HealthNYGov has been talking about.” 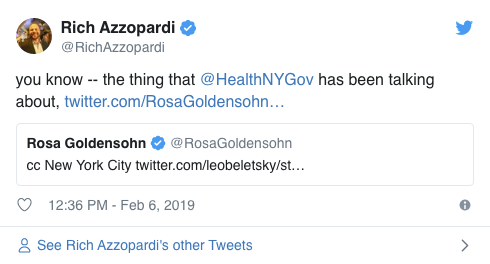 For the first time in eight years, annual overdose deaths in New York City decreased in 2018 — by 2.6%, to 1,444 — according to data released in late August.

But the drop wasn’t reflected in all five boroughs: Fatalities rose in The Bronx, particularly the South Bronx, as well as in Manhattan and Staten Island.

More than 300 people died of unintentional drug overdoses during the first quarter of 2019, and most deaths occurred in The Bronx, according to the Health Department. The synthetic opioid fentanyl was involved in roughly half of the deaths, city health data shows.

In his ruling, McHugh found that opening a facility where people could test and use illegal drugs under the eye of staff trained to quickly react to any signs of overdose would not violate the federal Controlled Substances Act.

Federal prosecutors argued such a center would violate a section of the decades-old law, commonly referred to as the “crack house statute,” which makes it illegal to own or maintain an establishment that manufactures or distributes controlled substances.

“I cannot conclude that Safehouse has, as a significant purpose, the objective of facilitating drug use,” the judge wrote. “Safehouse plans to make a place available for the purposes of reducing the harm of drug use, administering medical care, encouraging drug treatment, and connecting participants with social services.” 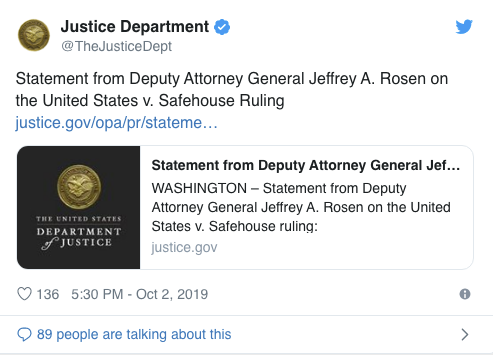 In announcing its plans to appeal, the Justice Department pledged to keep enforcing the law.

“Any attempt to open illicit drug injection sites in other jurisdictions while this case is pending will continue to be met with immediate action by the department,” Deputy Attorney General Jeffrey Rosen said in a statement.