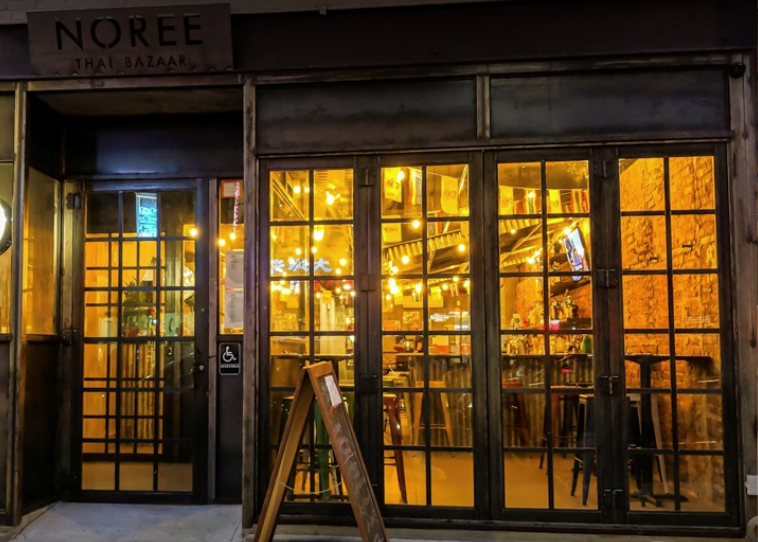 It's goodnight — at least for the meantime — for a "Thai night market-style" joint on Grand St. (Noree Thai Bazaar)

Another one (summarily) bites the dust.

A Lower East Side Thai restaurant was nailed by the State Liquor Authority in the latest round of liquor license summary suspensions for violations of COVID-related safety rules.

On Monday Governor Cuomo announced 14 more bars and restaurants have had their licenses summarily put on ice for “egregious violations” of pandemic regulations.

Only one Manhattan establishment made the latest addition to the list — Noree Thai Bazaar, at 274 Grand St., at Forsyth St. The S.L.A. suspended the place’s license on Aug. 21.

It also offers an “all day every day special” of a beer-and-shot combo for $10.

Other scofflaws punished by the S.L.A. in this latest round included seven bars in Brooklyn, along with one each in Queens, Southampton, Schenectady and Albany.

“Over the last five months, New Yorkers have made great sacrifices to bend the curve, and today’s record-low infection rate shows that when we listen to science and take this virus seriously, we can make a difference,” Governor Cuomo said. “But too many bars and restaurants are still flouting rules in place to stop the spread and local governments need to step up — so we’ve beefed up enforcement with the state police and Liquor Authority to hold bad actors accountable.

“Now is not the time to lose sight of our goal, and if compliance slips, all of the progress we’ve made over the last five months could be undermined. These establishments put the health of their staff, their patrons and all New Yorkers at risk — and their actions are simply unacceptable.”

S.L.A. Chairperson Vincent Bradley said, “We are seeing better compliance as a direct result of the hard work and time the task force is putting in, but there are still bad apples out there that need to be held accountable. As we head into the last couple weekends of summer, licensees need to continue to be vigilant and put the health and safety of New Yorkers on the top of their priority lists.”

Over the past weekend, the state’s multiagency task force — led by the State Police and S.L.A. — conducted 3,964 compliance checks, documenting violations at 34 establishments. Businesses found in violation of COVID-19 regulations face fines up to $10,000 per violation, while egregious violations can result in the immediate suspension of a bar or restaurant’s liquor license.