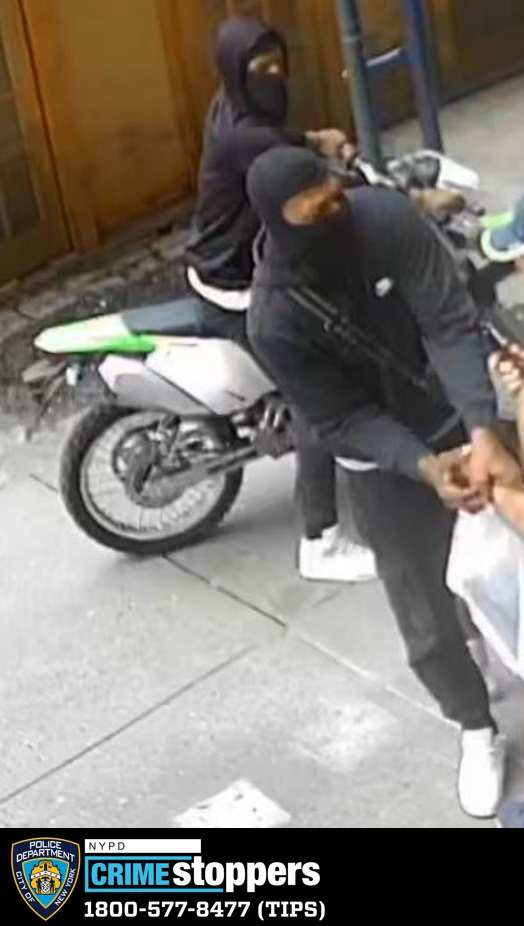 One of the trio ripped off, literally, the man's pricey Rolex. (N.Y.P.D.)

Rolling robbers ride off with man’s Rolex in Chelsea

BY THE VILLAGE SUN | It’s not just bicycle delivery guys who are zooming around all over the sidewalk anymore. A group of wheeled thieves rode up onto the pavement and ripped off, literally, a man’s pricey watch last Friday as he was walking in Chelsea in broad daylight.

Police said that on Aug. 26 around 10 minutes before 1 p.m., two guys on a dirt bike and another on a moped tailed a 64-year-old man as he walked along W. 23rd Street. Although he was very casually dressed, in shorts, a tank top and sneakers, the keen-eyed crooks apparently espied a flashy timepiece on his wrist.

In front of 208 W. 23rd St., just west of Seventh Avenue, they roared up onto the sidewalk. The passenger from the dirt bike hopped off and yanked a Rolex watch off the victim’s arm, pushing the older man to the ground when he resisted.

The robber then jumped back on the dirt bike and all three fled the location traveling eastbound on W. 23rd Street, then southbound down Seventh Avenue.

The victim suffered cuts to his right arm and hand but refused medical attention at the scene. The value of the stolen Rolex is around $12,000.

The three suspects are described as males with thin builds, wearing black face masks, dark, hooded sweatshirts and dark pants. The dirt bike was described as green and white and the moped as maroon.