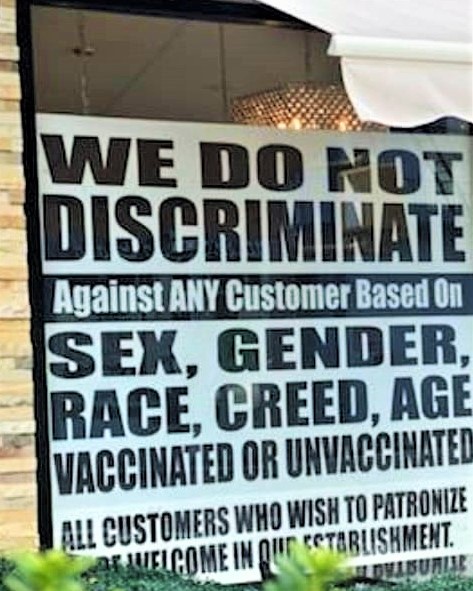 BY ART GATTI | The Bleecker Street Italian restaurant, Pesce Pasta, tells us, “Yes, we are checking vaccination status for those dining indoors,” while across the street the iconic pastry shop Pasticceria Rocco sports a sign in its window defiantly stating that it never will.

My conversations with persons answering phones or behind the counter makes it clear that once the law comes into effect requiring establishments with indoor dining to see diners’ proof of vaccines, Rocco’s will not obey that law — this new law that was enacted for the benefit of the community.

Maybe the owners of Rocco’s don’t subscribe to the same health guidelines that we do? If so, this may be because the family that owns the two businesses, in Manhattan and Brooklyn, are not part of any community we Downtowners recognize, but instead reflect the wrongheadedness vis-à-vis COVID of so many where they live, on Staten Island. We were all witness to the crazy lawlessness that raged through that borough when the earliest COVID measures were taken by government.

Now they look to spread their toxic rebellion to our streets. Well, more than 100 posts on NextDoor.com may convince them otherwise, because 80 percent of those replies condemn the much-loved old establishment for its ridiculous and harmful stance.

O.K., they have time to reconsider, since the enforcement of the proof-of-vaccine requirement won’t start for a couple of weeks. But will they?

Their Instagram page has become a rallying cry, mustering support from the public they think might support them, and featuring a ragtag collection of less than a half-dozen New York City businesses that will join them in a lawsuit that will restore their “right” — the right, apparently, to not care about public health.

So, even before the law comes into effect, neighbors are talking boycott. The big question is, will Rocco’s finally see the light

Rocco’s is named for its founder, Rocco Generoso, who was named for the saint of the same name. Ironically, St. Rocco was noted for trying to heal victims of the Black Death (the bubonic plague), which he himself caught.