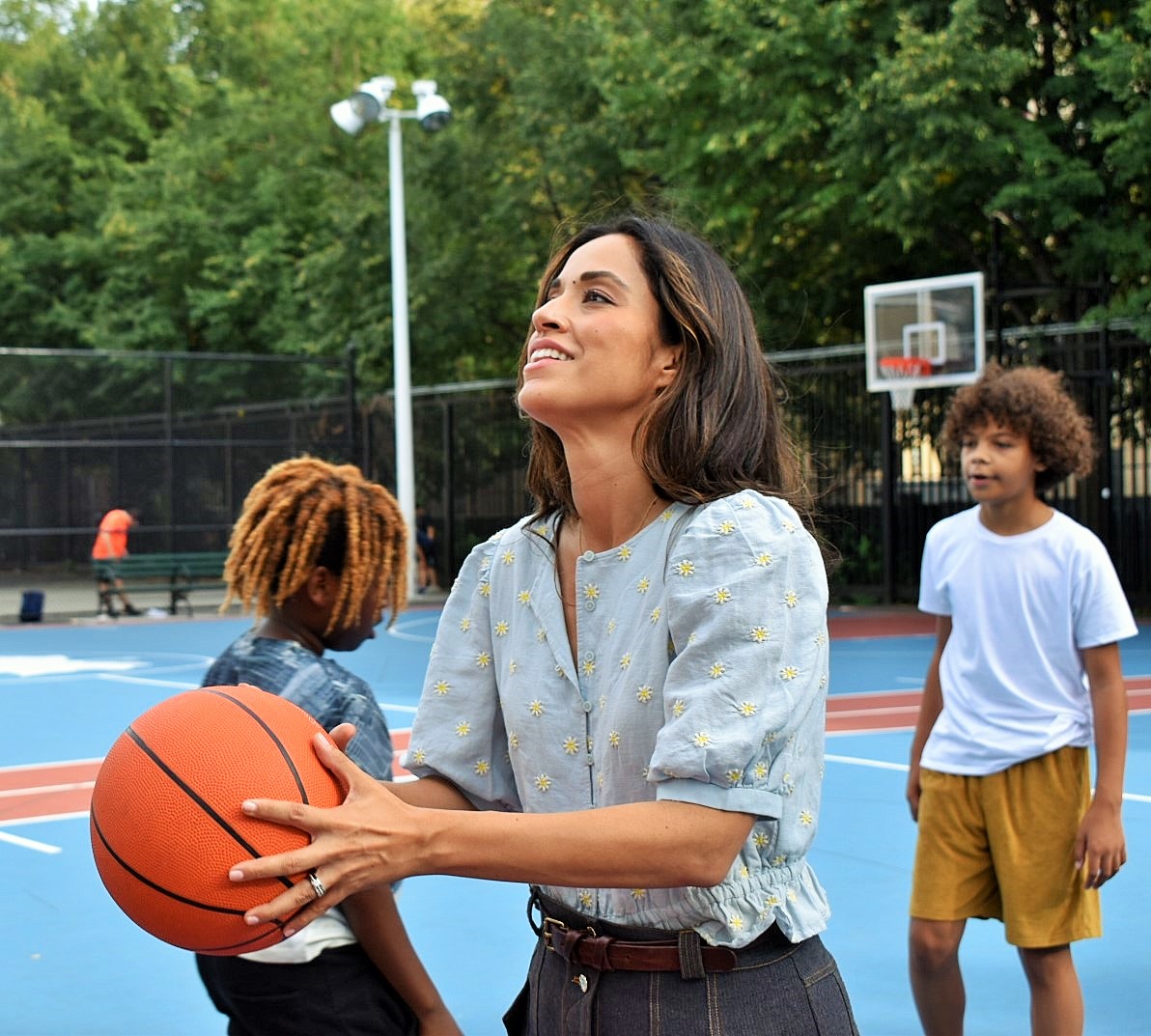 Shooting for a seat in D.C.: Carlina Rivera hit the court on her home turf of the Lower East Side during her campaign tour. (Rivera campaign)

BY THE VILLAGE SUN | Dan Goldman is saturating the market with TV ads, but Carlina Rivera has been doing her best to get out the vote the old-school way through on-the-ground campaigning.

The East Village city councilmember spent Sunday — the last day of early voting on the last weekend before primary election day — in an energetic, whirlwind tour of Congressional District 10.

She shot baskets on the Lower East Side, rode a flatbed campaign truck through Sunset Park, posed with a drag queen outside the Stonewall Inn and met with Open New York members — including the “abundant development” group’s founder and svengali, Ben Carlos Thypin — outside a prime development site in Noho.

Open New York, in fact, is backing the candidate with a “five-figure ad blitz,” according to The Real Deal. The YIMBY group considers Rivera “the only vehemently pro-housing candidate in the race.”

We’re all in for @CarlinaRivera, the pro-housing candidate for NY-10. https://t.co/I6Y19gfbEW

The Real Deal noted, “The endorsement of Rivera, who represents parts of Lower Manhattan in the City Council, in Tuesday’s primary also rewards her support for the Soho/Noho rezoning.”

Rivera’s daylong “10 in 10” tour stopped in 10 neighborhoods throughout the district, including Red Hook, where she visited Edward Lunch & Restaurant, on Lorraine Street; Gowanus, where she stopped at superfund site on the Gowanus Canal; Sunset Park, a heavily Hispanic enclave, where she rode on a flatbed truck with Congressmember Nydia Velazquez and state Senator Jessica Ramos and greeted voters at two churches and a supermarket; Park Slope, where she visited Down to Earth Greenmarket; Manhattan’s Chinatown, where she rallied at Confucius Plaza with supporters from the United Democratic Organization, and also made a campaign stop at Hamilton Madison House; the Lower East Side, where Rivera grew up, where she shot hoops at Hamilton Fish Park, on Pitt Street; Noho, where she posed for a photo with Open New York members and supporters outside the Edison parking lot at Great Jones and Lafayette Streets, one of the prime development sites in the contentious Soho/Noho rezoning plan, which Rivera strongly supported; the East Village’s “Little Ukraine,” where the candidate had a meal at Veselka restaurant; and finally the West Village, where she campaigned and talked about L.G.B.T.Q.+ rights outside the Stonewall Inn and Marie’s Crisis piano bar with Councilmember Erik Bottcher and Stonewall Democratic Club members.

Opponents of the Soho/Noho rezoning were not surprised to hear that Rivera had visited the Edison parking lot development site and posed with members of Open New York, including its founder, real estate investor Thypin, and the likes of Michelle Kuppersmith, an Open New York board member and Community Board 3 member, plus Ryder Kessler, who ran for Assembly versus Deborah Glick last year with the group’s endorsement.

Andrew Berman, the executive director of Village Preservation, said of the photo shared by Rivera’s campaign, “Definitely a lot of Open New York members in there. She’s got a lot of support from the upzoning crowd, who just want to see as much torn down and as much built as possible.”

Rivera — like Open New York — has passionately championed the Soho/Noho rezoning, which was approved last year and includes the Noho part of her Council district, maintaining it will generate affordable housing in a “high opportunity” area. However, critics like Berman argue the rezoning does not obligate developers to build affordable housing and that there are loopholes they can use to avoid doing so, resulting in the rezoning mainly being “a gift to developers.”