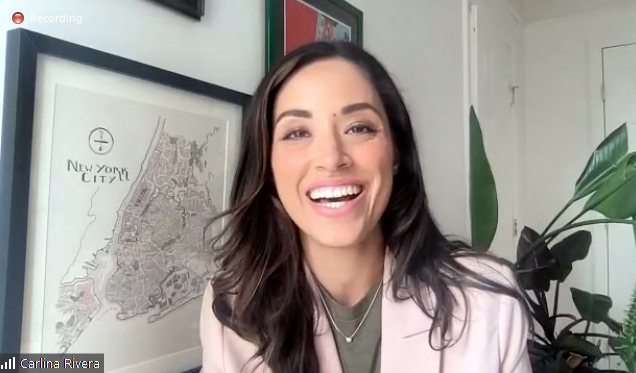 Councilmember Carlina Rivera was happy to receive the support of 1199SEIU. (Photo by The Village Sun)

BY LINCOLN ANDERSON | Carlina Rivera has been adding union muscle to her congressional campaign, recently scoring a series of coveted endorsements. The biggest coup was her winning the support of 1199, the health workers union.

“Big” is the right word. In fact, 1199SEIU United Healthcare Workers East is the nation’s largest healthcare union. And it’s the largest labor endorsement so far in the District 10 race.

The newly redrawn congressional district includes all of Manhattan south of 14th Street, plus Brownstone Brooklyn neighborhoods like Park Slope and Carroll Gardens, along with Borough Park.

Around 6,000 members of the 1199 union live in the district, according to Rivera’s team.

Rivera and 1199 announced the endorsement in a Zoom press conference on July 6. They were joined by Rivera supporters Congressmember Nydia Velaquez and Brooklyn Borough President Antonio Reynoso.

The East Village councilmember called the union’s support “a critical component of the winning coalition that we’re putting together for NY-10.” She added that the prominent union’s membership “truly represents the fabric of our community and our district.

“My mother is a proud union member,” she noted. “I know the importance of a union having your back.”

Rivera formerly chaired the City Council’s Hospitals Committee. She praised 1199 members for having been on the front lines during the COVID-19 pandemic.

“There is no quesetion that Carlina Rivera is the best advocate for us to be our champion in Congress,” said Milly Silva, 1199SEIU executive vice president, “whether it is healthcare, whether it is housing, whether it is criminal justice reform.”

Velazquez was reverently introduced during the Zoom call as “La Luchadora herself” — referencing a ferocious female pro wrestler — and “the political godmother” of the current generation of rising Hispanic politicos and leaders.

“I know from experience that winning 1199’s support is a sign of a campaign that is getting serious, that is getting momentum,” she said. “Over 30 years ago, I got the support of 1199 — and here we are again.”

Velazquez noted that her district — which, before the recent redistricting, contained part of the Lower East Side — formerly included nearly 47 percent of the newly drawn Congressional District 10.

Reynoso said of Rivera and himself, “We’re both kids that grew up in Section 8 housing.” He added that his mother was an 1199 home health aide.

Since the topic was 1199 and healthcare, during the Q&A with the press, The Village Sun asked Rivera if cutting down hundreds of air-cleaning, mature trees in East River Park wouldn’t exacerbate the district’s already-high asthma rate, and how it would impact the district’s future health. The councilmember supports the East Side Coastal Resiliency megaproject, which has already razed the park’s southern half and all its trees, and has also felled a number of mature trees in the park’s northern half, as well. Under E.S.C.R., the park will be raised 8 feet to 10 feet to put it above the level of coastal flooding.

In response, Rivera noted that air monitors are part of the reiliency project.

“First and foremost, we do have to protect the families who are living in low-lying areas along the coast. And these families are mostly NYCHA families,” she said, referring to New York City Housing Authority public housing along the East River.

Rivera noted she co-sponsored the Asthma Free Housing Act, which amended the city’s administrative code to clarify landlords’ and the Department of Housing Preservation and Development’s responsbilities to combat indoor asthma allergen hazards, like mold, which were affected by Hurricane Sandy’s floodwaters.

In addition, she said, “We will be placing more trees in the neighborhood than they have ever seen.”

“This is the reality — climate change is not going away,” Rivera stated. “It’s a situation all over the city. NYCHA residents have to be prioritized. I always put families’ health first.”

Meanwhile, E.S.C.R. foes continue to hound the councilmember. They recently haranged her when she gave remarks at Hamilton Fish Pool when the city’s outdoor pools opened. They also regularly hold “Lunch With Carlina” protests, squeezing into a small patch of green in front of her East Village office, to highlight the park’s loss.

After the endorsement, the Zoom continued with Evan Roth Smith, a political strategist on Rivera’s team, laying out the critical factors that could put her over the top in the Aug. 23 Democratic primary.

Among the crowded field of 13 candidates, Rivera is the only Hispanic, a group that makes up one-fifth of the district, he said. Meanwhile, although Brownstone Brooklyn is a high-turnout, liberal hotbed, the vote there will be “diluted” due to the high number of candidates, he predicted. Among the candidates living in Brooklyn are former Mayor Bill de Blasio, Assemblymember Jo Anne Simon and Congressmember Mondaire Jones, the latter who only recently moved into the district.

In addition, Roth Smith noted, voter turnout in the recent June 28 Democratic primary for Assembly, governor and other offices was quite low — down by about 40 percent. The turnout in August, he predicted, “might be even lower.”

Due to New York’s redistricting mess, the congressional and state Senate primaries were pushed back from June 28 to Aug. 23. That could stand to help a candidate like Rivera, if her voter base remains in the city during the primary while other candidates’ backers are out of town on vacation.

“She has the public housing leaders’ support,” Roth Smith noted.