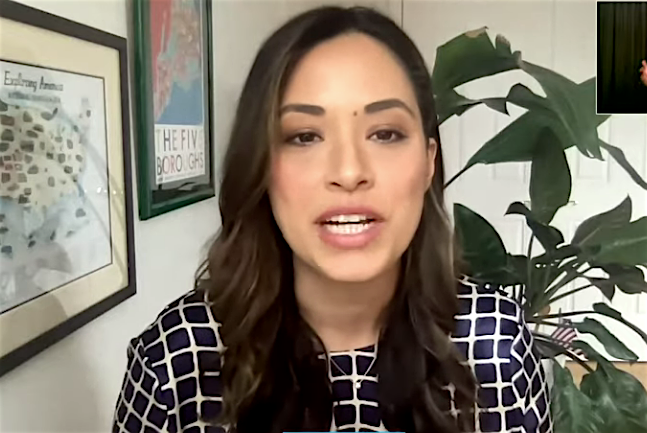 Rivera: Climate-change projects will be ‘our generation’s moonshot’

BY LINCOLN ANDERSON | The East Side Coastal Resiliency mega-project will be a Darryl Strawberry-sized home run for the community, according to Mayor de Blasio and Councilmember Carlina Rivera.

A good part of the mayor’s Thursday press conference, which Rivera joined, was spent promoting the ambitious $1.45 billion undertaking, whose project area stretches from Montgomery St. to E. 25th St.

Rivera called the project “very, very personal” for her. She predicted that climate-change efforts, like E.S.C.R., “are going to be our generation’s lasting mark on the nation’s infrastructure.”

(In the video, above, of the mayor’s April 15 press conference, the section on the East Side Coastal Resiliency project starts at 11:25 minutes. Councilmember Rivera’s remarks start at 16:40.)

This week work is kicking off on the E.S.C.R. project’s Stuyvesant Cove Park section, between E. 18th and 23rd Sts.

However, a contractor for the East River Park segment, between Montgomery and E. 12th Sts., has not been selected yet. Under the scheme, East River Park would be raised from 8 feet to 10 feet and then rebuilt from scratch, in a massive job that would last at least five years, though opponents warn it could well take longer.

Harking back to the devastation of Hurricane Sandy in 2012, de Blasio called the project “absolutely crucial.”

“The East Side [Coastal] Resiliency project, it’s one of the biggest in the nation, and will protect so many people in one of the most densely populated areas of the nation,” he said. “And we have learned through experience that we have to get ahead of this challenge and invest now. It will protect tens of thousands of residents, including many, many public housing residents. It will protect the lives of people against whatever mother nature throws at us, and it’s something we’re doing for the long term.”

According to the city, 110,000 residents, including 28,000 public housing tenants, would be protected from flooding by the E.S.C.R. plan.

In her remarks, Rivera fondly recalled childhood memories of East River Park and stressed the importance of the city’s resiliency efforts.

“It is very, very personal for me and my community,” she said, “to embark on a first-of-its-kind project that not only protects New Yorkers from storms and protects my community from sea-level rise, but preserves access to a cherished park, where I as a Lower East Side resident have so, so many memories.

“East River Park was an escape for me,” she said. “It was where I practiced my Darryl Strawberry impersonation, winning countless Little League games, and where I learned to ride my bike.

“It’s time to ensure that another storm never brings 8 feet of water into our East Side homes and businesses again,” she said.

“Climate-change projects, like E.S.C.R., are going to be our generation’s lasting mark on the nation’s infrastructure,” she declared. “They’re our generation’s moonshot, our subway system, and they’re not going to be easy. But I’m happy that our neighborhood stepped up and took the lead on the first major resiliency project in New York City.”

The councilmember noted that other parts of the city, like Coney Island, Red Hook and the South Bronx “have been crying out for their own resiliency projects.”

She added that, due to phased construction, East Siders would be able to use half the park during the work, as well as use other parks around the neighborhood that have been “improved and upgraded” to pick up the slack while part of East River Park is off-line.

“The project is a big deal for the East Side,” Rivera stressed. “It’s monumental.”

Councilmember Keith Powers also spoke in favor of the E.S.C.R. plan. A Stuyvesant Town resident, he recalled watching the floodwaters rising in Stuyvesant Cove Park during Sandy and the moment that the lights went out.

During the press conference, a promotional video of the resiliency project was shown, featuring the likes of Nancy Ortiz, tenants association president at the Lower East Side’s Vladeck Houses, and outgoing Parks Commissioner Mitchell Silver, both touting the project.

“We New Yorkers think big,” Ortiz said. “Let’s show the world what we can do.”

Speaking of home runs, betraying his true colors perhaps as a Boston Red Sox fan, de Blasio quipped he was happy the young Rivera had idolized Strawberry while playing ball in East River Park and not a player from the Sox’ hated division rivals.

“I’m really glad you used an example from the Mets and not the Yankees for when you were getting your home run stance there,” he joked. “That makes me feel good about you. Thank you!”

Meanwhile, opponents of the E.S.C.R. plan are set to hold a protest march on Sun., April 18, starting at noon in Tompkins Square Park and heading down to the East River Park amphitheater for a rally at 1:30 p.m. The opponents support a simpler plan that would not raise the park but would instead create berms and floodwalls to protect the surrounding community; although it would be a flood-control plan, unlike the “elevated park” scenario, it would not combat sea-level rise.

Some opponents shrugged that Thursday’s press conference by de Blasio and Rivera hyping the resiliency project was just an effort to “get out ahead” of Sunday’s protest.