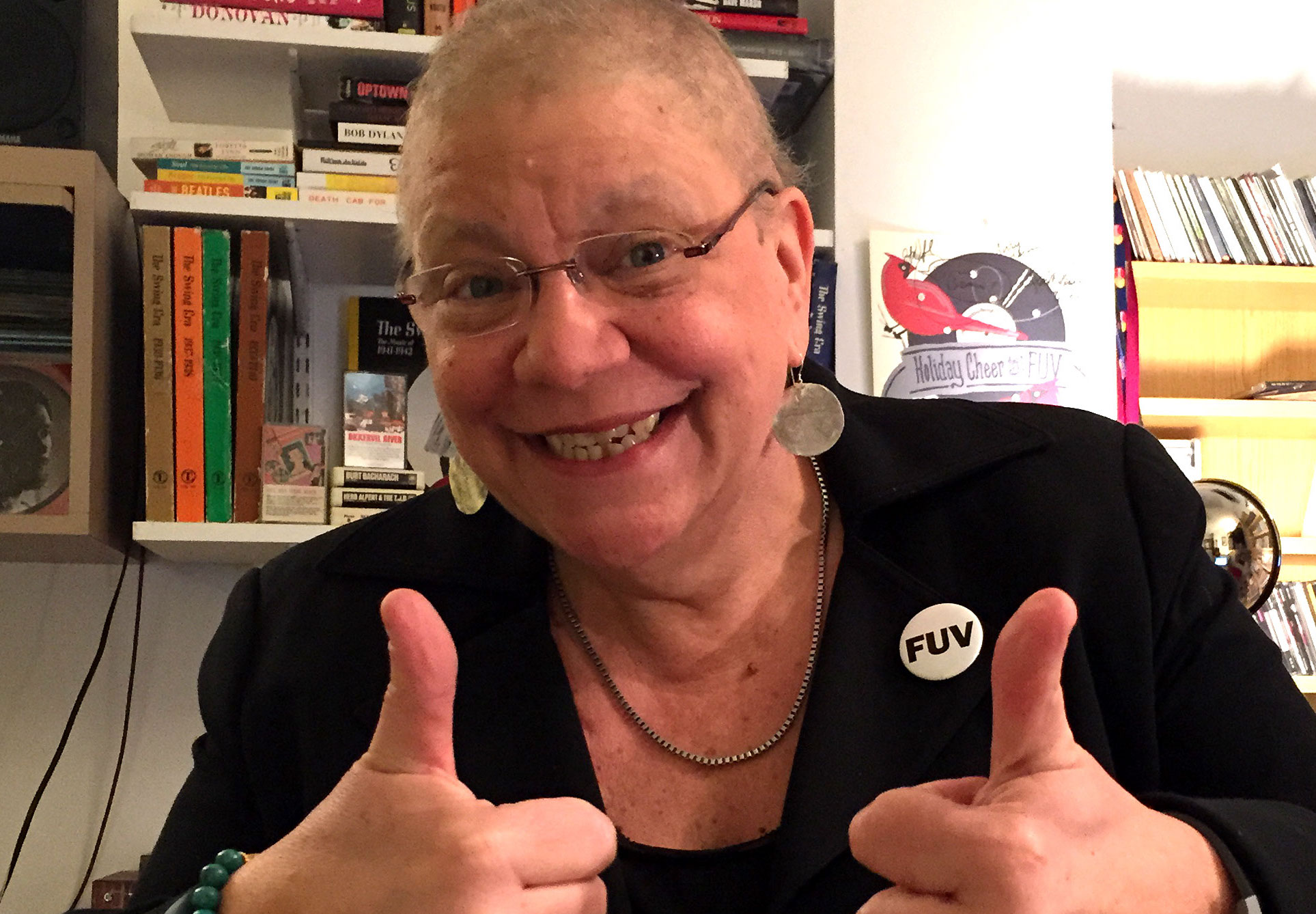 Iconic local radio DJ Rita Houston was on the air for 26 years. This photo was taken in early 2015 after she underwent treatment after being diagnosed with ovarian cancer. (Courtesy WFUV)

Rita Houston: The DJ who saved my life

BY KATE WALTER | This was a terrible year and December was a terrible month. First my church burned down in a six-alarm fire on Dec. 5. Then my favorite DJ Rita Houston, whose Friday night show “The Whole Wide World” on WFUV got me through the lockdown, lost her six-year battle to cancer on Dec. 15.

I felt like I spent the month of December crying. I cried when I saw the video of Middle Collegiate Church burning. I cried when I was home alone on Christmas Eve watching the service from Middle Church that was broadcast nationally two years ago. I was in the sanctuary when they filmed it.

I loved when the choir led the congregation in singing “Silent Night.” We held lit candles and the sanctuary lights dimmed. Knowing that I would never be in that space again felt unbearably sad. The broadcast was updated with Reverend Jacqui Lewis, the senior minister, looking radiant and talking about how we would rise up and rebuild.

A week earlier, I was anticipating Rita Houston’s radio show. I never missed it. She hadn’t been on the air the past two weeks and I hoped she was on vacation. That afternoon I read the newsletter from the station and learned she had died that week. The station sent condolences to her wife, Laura Fedele, who also worked there. How did I not know Rita was gay?

That evening, Friday, Dec. 18, WFUV broadcast her last show, recorded a few weeks ago and co-hosted with her friend Paul Cavalconte. I was mesmerized. What would she play? How would she say farewell to her listeners and to her life? Her familiar, deep, honeyed voice did not sound good. I was crying and dancing, kicking myself for never going to the station’s holiday concerts at the Beacon Theatre where she was the host.

Now Rita Houston was gone, too. She was only 59. I considered her program another sanctuary. Her voice was reassuring and calming, always around when I needed her. She was there when I went through a terrible breakup and when my mother died. And more recently she was there during the lockdown in New York when I was really scared at the beginning. I recall her playing Van Morrison’s “Till We Get the Healing Done” and thinking what a great choice. Of course, that was before Morrison turned into an idiotic anti-mask nut.

Music is a huge part of my life. I listen to the radio and read books. I don’t even own a TV.

I send checks to my favorite public radio stations. I admit my fantasy job was being a DJ on the radio. The closest I got was working as a music reviewer for many magazines and newspapers.

Like me, Rita Houston grew up in the New York City area listening to the legendary DJs Alison Steele and Vin Scelsa and Frankie Crocker, who she cited as her influences. Houston was known for her eclectic mix and introducing listeners to new artists from around the globe. She was the first to play Brandi Carlile on the air.

Among her favorite artists were Bowie and Prince and John Prine and Sharon Jones.

She also loved Joni Mitchell and Lucinda Williams and Rickie Lee Jones. And she had an incredible knowledge of ’70s and ’80s disco. Last summer when she played the classic “Last Night a DJ Saved My Life,” by Indeep, I tweeted to her that she was saving mine. She retweeted me.

Houston could go from folk to funk or from alternative rock to disco in a heartbeat. Her mix and segues were brilliant. She was also a great interviewer.

The station Web site has the entire playlist of her last show. Her final mix included several personal favorites: “The Weight,” by the Band, and “I’ll Take You There,” by Mavis Staples. And a remake of Roy Ayers’s soulful classic “Everybody Loves the Sunshine.” She closed with “In My Time on Earth,” by The Waterboys. By now, I was sobbing.

Besides the loss to her family and friends, Houston’s death is a huge loss to music lovers and to WFUV where she was the program director. She had revamped the station, taking it from a folkie venue to a showcase of different sounds and genres. She was on the air for 26 years. Hard to believe I will never hear another new show from her. I was a huge fan. She made Friday night fun.

On Friday, Jan. 1, WFUV will honor her with a special tribute called “Thank You, Rita Houston.”

Walter is a freelance writer and the author of the memoir “Looking for a Kiss: A Chronicle of Downtown Heartbreak and Healing.” She is working on a memoir in essays about her life during the pandemic in New York City.