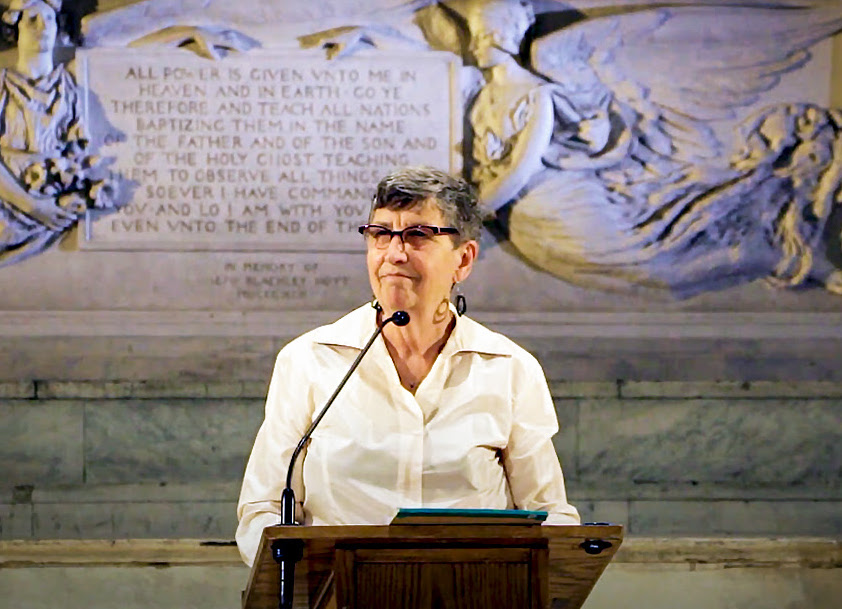 Reverend Donna Schaper is retiring as the senior minister of Judson Memorial Church.

Rewirement: On stepping down from leading Judson Church

BY REV. DONNA SCHAPER | I feel like a cliché. So many people in my age bracket (the early zooming towards mid-seventies) are retiring. We are moved by the Black Lives Matter movement to think that it is high time white folk (like me) got out of the way and stopped sitting on the nest of the really good jobs. We are unlikely to hatch any more eggs. We are tired by 4 p.m. and realize that working till 8 p.m. is the job description. We are also ill-equipped for the lifestyle pivots of the current workplace. Not to mention technology.

I made the mistake so many make, after warning so many not to make it. Don’t overstay your welcome. Don’t stay too long. Don’t hog the GOOD salary, benefits, social capital and comfort of being a comfortable old shoe. I should have left a year ago, before COVID drove me to the land of the cliché.

But since “should” is not a word in the Mende language (remember, the tribe that came over on the Amistad), I won’t should myself. They say, rightly, that either you do, or you don’t do. Also, Yoda joins them: “There is no such thing as trying.” You either do or you don’t.

I left Judson Memorial Church because I was tired, out of sorts and on the edge of losing my inner peace. COVID stole most of it. Judson stole none of it. Judson without a packed house was profoundly disturbing to my psyche. New York didn’t even feel like New York anymore and when I went into early urban exile to my so-called summer house, I felt a great sigh of relief. Not attractive, I know. But still a great sigh. I had outgrown the creative phase of my ministry at Judson about three years earlier, with top-notch younger people in charge of everything and me in charge of the HR, fundraising, conflict management and traffic jams. It was always a place too active not to need a full-time manager. It is also so chock-full of creative types, like I used to be, that I gladly did the dishes while other folks designed the meals. Being a creative, goofballing poetic type myself, I did the dishes but preferred designing the meals.

The younger me’s were in charge of the Bailout Theater, that creative weekly soup kitchen that fed people who thought they were a bit too well-fed to really need food, even though they only got a few meals a week. That is a real remnant of the Greenwich Village population. Only Judson would do free dinner with a free show. The New York City New Sanctuary Movement had become a coalition and had phenomenal leadership, as did Sanctuary for Protesters and Extinction Rebellion and Etsy.org and Clearwater and Richard Wolff’s Economic lecture and so much more. Even our community ministry program, with the 109 fancy interns who all graduated and went on to do Judson-style ministry around the country, was starting to lead itself. I wasn’t a required course, but an elective, except for holding the space and doing the dishes.

Judson’s DNA is innovation and experimentation. Its fundamental preexisting condition is integrity — whether in seeing through the sham arguments against abortion that pretend to be godly or in building a golden calf during Occupy and not thinking it was just a sculpture or in using “sanctuary” to challenge the federal government’s injuries against immigrants. Judson’s people are opinionated, smart, lively, engaged New Yorkers. When they sing together of a Sunday, you almost think the angels have landed. I will miss almost every single one of them. Would that I could have died with them. I can’t. I needed one more chapter. And they needed somebody younger.

Mortality was knocking on my door loudly enough that I listened. It had that tendency for everyone, not just the soon-to-go crowd of my cohort.

I will take our Bricks and Mortals project with me. It is designed to assist religious spaces to become crowded with community service and not sell out to developers. It has funding to expand in five cities, and I will become the consultant on that project. That will be my continuing thread in anti-racism and anti-gentrification.

I will also be pastor of a small and interesting congregation of lesbians and farmers and policemen on the North Fork of Long Island, at the Orient Congregational Church. Both the consulting work and the pastoring work will be part time, so I will successfully cherrypick the fun parts of my Judson job and not have to do so many dishes. I call this move rewiring, not retiring. I also call it dehabbing — no longer being the keeper of what I once was — prehabbing — getting myself in shape for my last chapter — and sometimes even rehabbing, dealing with the wounds of nearly 45 years in the ministry. They show up in my knees. Maybe I prayed too much? Or too little? Either way, my knees need work, and not just in my anti-racism work, where I intend to take the knee as often as possible.

My husband, who I saw far too little in the 15 magnificent years at Judson, will also retire soon. Our new friends are farmers and one plants global vegetables for the Mexican and Asian restaurants on Long Island — and supplies the fast-growing food bank the churches sponsor with the same. In New York City, one out of two people are said to have been born outside the country. On Long Island, one out of five grew up outside the U.S. and eat “foreign” food. I also thought it was high time I had a purple and not deep blue congregation. I achieved my goal.

Another of our new friends plants flowers and has a flower farm. She is also a banker, often on the Jitney with me. Why?

“Because people are so depressed,” she said. “The market for flowers is growing.”

I have already planted a large plot with Asian greens and arugula. I will have a little free stand on the main road, where people can just pick up the evening’s salad. The baker down the road puts out the sourdough breads, fresh, on Sundays. He gives OCC a free one for communion; otherwise, it is 5 bucks a loaf.

Life is often pretty, and it could yet become beautiful. Signs that say, “SUPPORT THE POLICE AND SUPPORT ACCOUNTABILTY” might proliferate right next to “BLACK LIVES MATTER.” They do in Orient and in Brooklyn.

I love the sourdough bread, the flowers, the global vegetables, the city and the country. I love the barely working elevator at Judson and the way we overuse the building there on behalf of God and humanity, the way the homeless move in and sneak a shower and use the toilet. I love both. Call me city mouse, country mouse. I might even be an interesting cliché.

Schaper will retire as the senior minister of Judson Memorial Church at the end of May.