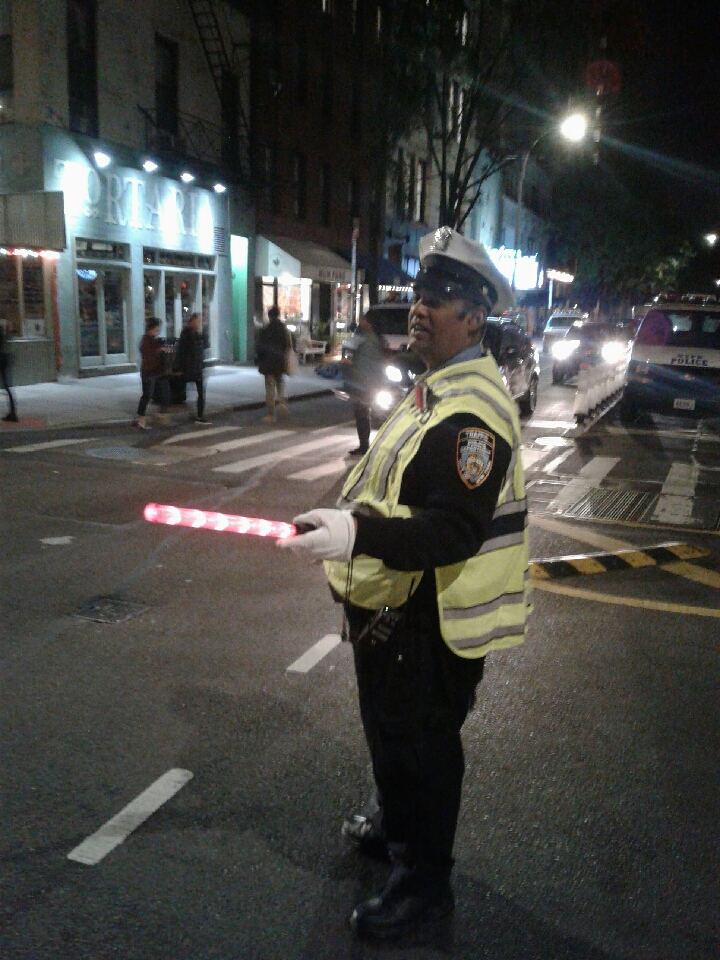 BY LINCOLN ANDERSON | Following the launch of the 14th St. busway pilot program on Oct. 3, city officials have been crowing about its success in increasing bus speeds.

Within two weeks of the busway’s start, City Council Speaker Corey Johnson, hailing it as a “raving success,” declared that the idea should be extended to other major Manhattan crosstown boulevards, like 34th and 42nd Sts.

The Metropolitan Transportation Authority said that, in the busway’s first week, M14 ridership increased by nearly 4,700 per weekday, while bus speeds were up 35 percent. However, this may be due, in part, to the route being shifted to Select Bus Service, Andy Byford, the head of New York City Transit, conceded.

The busway bans cars on 14th St. between Third and Ninth Aves. daily between 6 a.m. and 10 p.m. Only buses, trucks with more than two axles or six or more wheels and emergency vehicles are allowed during these hours. All other vehicles, such as delivery trucks, can make trips to access the curb or garages along 14th St., but must then take the next right-hand turn. Also, all vehicles, except for Metropolitan Transportation Authority buses, are restricted from making left turns off of 14th St.

Officially known as the Transit & Truck Priority Plan, it’s the first of its kind in the city. It was pitched as an 18-month pilot program, though local residents suspect the M.T.A. and Department of Transportation have always aimed to make it permanent.

In a new twist, last week, the M.T.A. started installing special bus-boarding platforms at select bus stops. Made of modular black rubber material, the platforms take up the parking lane. The first one is being added at Seventh Ave.

But many local residents, including those who sued to stop the busway plan, remain dubious about its impact. The project was only allowed to move forward after a judge lifted a restraining order that had been imposed as part of a community lawsuit. Yet, the litigation — filed by attorney Arthur Schwartz, a W. 12th St. resident — is not over, Schwartz assured The Village Sun. He said the appeal he filed in August remains active and that he plans to file a legal brief on Dec. 2, so that the appeal would be argued in February.

Critics point out that the first study of the plan’s effectiveness was done during the Jewish High Holidays, including Yom Kippur on Oct. 9, when fewer drivers were out on the streets. Also, the only thing currently keeping 14th St. from being flooded with banned vehicles is an army of traffic agents, they claim. In addition, side streets have seen heavier traffic, though it ebbs and flows, they note. Meanwhile, 14th St. frequently appears desolate now, they add, thanks to the bus- and truck-biased plan.

Elissa Stein, a member of the ad hoc 14th St. Coalition, said, “Honestly, so far, things on the street have been pretty mellow. Fourteenth is often a wasteland and side streets haven’t been as overwhelmed as we assumed — at least not near me, at 12th St. and Sixth Ave. Having said that, this all took place during the Jewish holidays when things on the streets are generally quiet. Plus, there are tons of traffic cops out. I think things will change for the worse but we’ll see.”

Among residents’ questions is whether enforcement will shift mainly to traffic cameras instead of the traffic agents who are currently posted all over to keep cars off of 14th St. Residents believe the traffic agents may only be temporary.

“I’ve heard they are but don’t know the timeframe for their departure,” Stein said. “Many of them stand around with nothing to do.”

Judy Pesin, another Coalition member, said surrounding streets are being affected, but that it’s not uniform.

“From what I hear and see, the impact differs almost by block,” she said. “According to our e-mail traffic, 13th St. around University Place and west to Sixth Ave. is getting a brunt of traffic. Cars seem to be directed there from Third Ave. and the first opportunity to turn north is Sixth Ave.  Traffic thins out across Sixth Ave., so my street, between Sixth and Seventh Aves., only occasionally gets traffic — but it is the exception and not the norm.

“I also hear that north of 14th St. is getting hit,” Pesin added, “especially in the evenings and weekends.  Residents of 15th St. complain of the horns after 8 p.m. Also, there’s congestion on Seventh Ave heading south — from the cars turning from 16th St.”

Pesin said she and Stein met on Oct. 10 with D.O.T. representatives, police, Johnson Chief of Staff Erik Bottcher and representatives from state Senator Brad Hoylman’s office to check out traffic conditions on their respective blocks, but, “It happened to be a day with no congestion.”

Being unable to get a taxi on 14th St. is also an issue, she said.

“I am hearing a concern about not being able to get cabs and the higher cost now that they are driving around side streets to get to the final destination,” she noted.

“I have written to Ed Pincar about allowing cabs to cruise,” she said, referring to the Manhattan D.O.T. commissioner. “I can’t imagine that would crowd up the very empty 14th St. But he didn’t get my point. I can’t imagine cabs are happy with all the business handed off to the Ubers and Lyfts.”

Yellow cabs do have an app, called Curb.

“Some neighbors are crying foul — upset at how soon D.O.T. is claiming victory and the news media supporting the same,” Pesin said. “I am waiting to see what happens when the many N.Y.P.D. folks on all the corners go back to their usual posts and cars need to fend for themselves.”

This reporter took a Via across 13th St. on a recent weeknight and a yellow cab across 17th St. on a recent weekend afternoon and both streets had traffic. Both drivers — as well as another yellow cab hack interviewed while driving across 13th St. during the daytime — said that, in their opinion, traffic had definitely worsened on the surrounding side streets since the busway’s launch.

Attorney Schwartz echoed other anti-busway activists in saying that the traffic on side streets is “inconsistently jammed up — which is interesting. It varies by street,” he said. “In Chelsea, it’s horrible.

“They’re declaring it a victory — no traffic, no impact,” he said of the M.T.A. and D.O.T. “It’s not true. A lot of streets are really filled up, especially the avenues, Eighth, Seventh, Sixth, Fourth. And there’s more traffic east of Fifth Ave. on 12th and 13th Sts.”

Schwartz said that a grant may be coming through that will allow the opponents to do their own traffic studies.

He said it’s no doubt a big expense to have so many traffic agents out there — in two shifts per day — redirecting traffic away from 14th St.

David Marcus, a former member of the 14th St. Coalition Steering Committee, said he is seeing more traffic on the side streets.

“No question about it,” he said.

On the other hand, he noted, “Fourteenth St. is like a wasteland. You can go out there most times and not see anything on 14th St. It’s ridiculous.”

Marcus slammed D.O.T. and the M.T.A. for not being upfront about all the factors that are improving bus speeds.

Under Marcus’s theory, because fewer elderly and handicapped riders — “who take longer to load,” he noted — are taking the M14 now, due to fewer bus stops, it’s likely boosting bus speed.

Another factor D.O.T. needed to consider in its analysis, Marcus added, is the new ban on left-hand turns — and how that may have already been speeding up buses on the street before the busway went into effect.

Like others, he said the impact of the busway is being felt on nearby streets, but not uniformly.

Above all, Marcus is angry that local politicians and City Hall rammed the busway through without getting buy-in from the surrounding residential community.

“It’s this mad rush to reshape the New York cityscape, in a way that’s very one-sided, by newbies who are coming in,” he scoffed. “And it ignores the will of the people.”

Marcus said 14th St. was fortified — with steel and concrete — in the 1990s as a federal truck route, so that is where the traffic should be.

Like most neighbors, he thinks the busway is an 18-month pilot project in name only.

“Is this is a pilot project?” he asked. “I don’t believe that for a minute. If you believe that, you’re living on another planet. It’s already a foregone conclusion. It’s a question of whether we, as a community, can fight back, in terms of publicity and Arthur’s lawsuit. The lawsuit is still alive. We look forward to a hearing on the merits.”

For his part, Mayor de Blasio has been more measured than Council Speaker Johnson, for one, about the busway so far.

On Oct. 18, Brian Lehrer had the mayor on his show on WNYC and asked him, given the busway’s seeming early success, if the traffic plan shouldn’t now be implemented on 23rd and 34th Sts., too.

“We’re not going to make a huge policy decision based on just a few weeks of experience,” the mayor answered. “I said to the community, we’re going to study this based on a substantial amount of time — I’m going to keep my word to folks — and if we find that it opens the door to this approach in other places, again, we’re going to have a lot more to back it up than we just did the first few weeks and assume that’s how it would work long-term or how it would work everywhere else. This is a really, really important test. It’s never been done before in New York City, and we’ve got to get it right, and we’ve got to play the long game. … But if we’re going to do something, we better make sure it is sustainable for the long run and we’ve got to do this test the right way.”

Answering a caller on Lehrer’s show, “Jason from Greenwich Village,” who similarly suggested expanding the busway to other streets, the mayor answered, “A lot of folks…in the community were really concerned about some of the consequences of it, intended and unintended, and whether there’d be more traffic on the side streets and all that. We need to study that over a period of time and be responsive to those concerns as well.”

D.O.T. did not respond to a question for this article on whether the traffic agents posted around the busway are temporary or permanent.