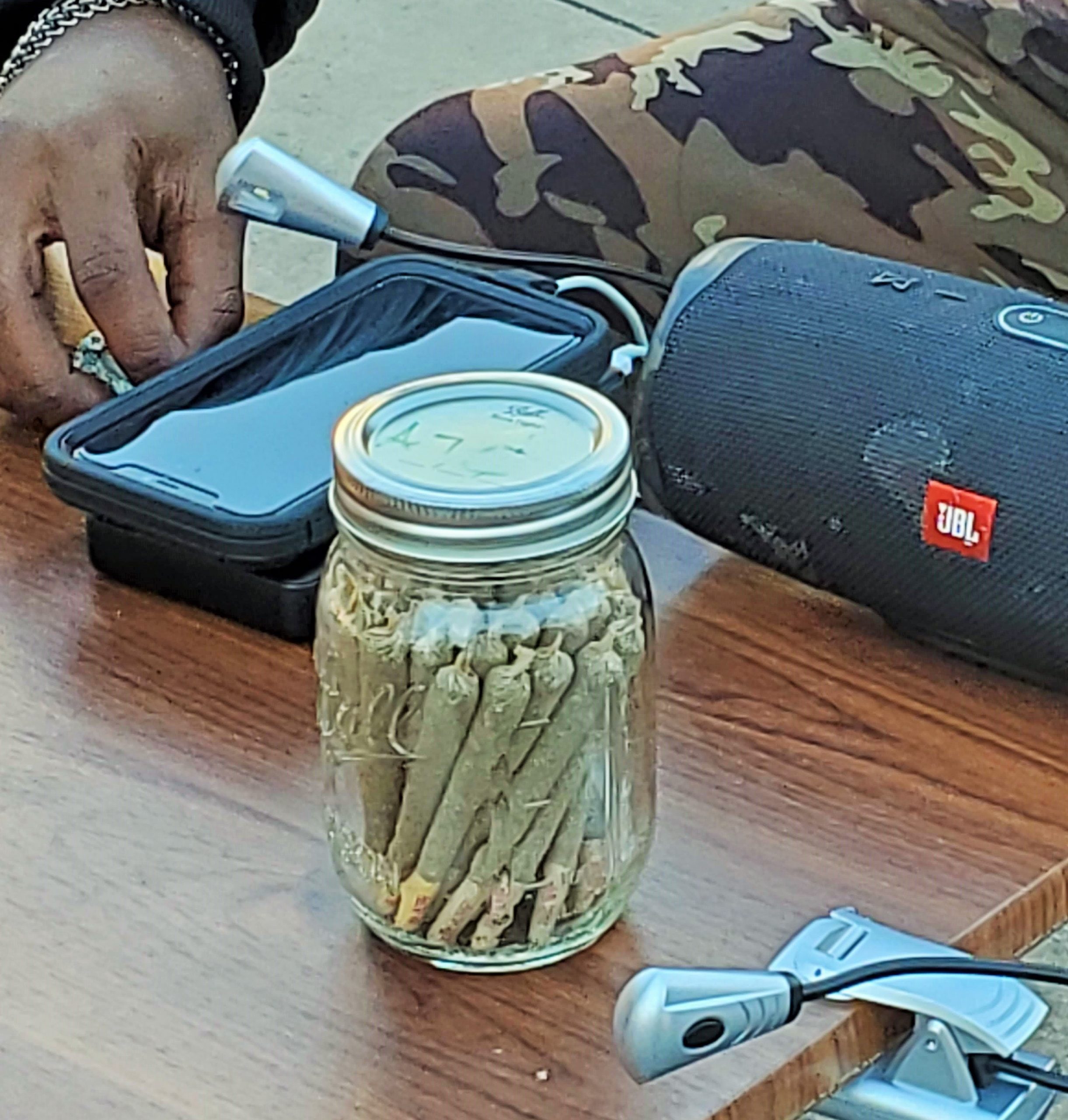 A "budding" entrepreneur with '"pre-rolls" for sale on his table in Washington Square. Seen along with his sound system, the small lights are for sales during nighttime, which is when one of the pot vendors was recently robbed. (Photo by The Village Sun)

By now, everyone knows marijuana merchants are openly hawking hash right from tables in the park — and doing a brisk business of it, too.

“Brisk” in both senses of the word as sales continue even in freezing temperatures. Call it “winter weed.”

“Pre-rolls!” “Edibles!” The cannabis sellers’ cries leave no doubt that what they’re pitching is real grass — and, no, obviously not the kind on the park’s lawns.

So maybe then it’s not such a big surprise that one of the park’s “green” ganja entrepreneurs was recently held up at gunpoint.

According to Greenwich Village’s 6th Precinct, on Wed., Feb. 16, around 10 p.m., one of the pot peddlers was cleaned out by an armed bud bandit. Technically, the police report says the victim, who was in his 30s, was “a man selling merchandise.”

According to the report, the value of the vendor’s loss was $900. It wasn’t immediately clear how much of that amount was cash. Pre-rolled joints in the park typically go for $10 to $15; so the contents of the cannabis-packed canning jar shown in the photo above could be worth a few hundred dollars.

The vendor was not injured.

There was no description provided of the robber.

Captain Stephen Spataro, the precinct’s commanding officer, mentioned the spliff stickup at a recent meeting of the 6th Precinct Community Council. According to a source who attended the event, Spataro said there actually had been two pot purveyors recently robbed at gunpoint in the square. However, a precinct community affairs officer only had the one.

While pot apparently sometimes can be dangerous to vend in the park, generally speaking, heroin is a potentially far more harmful drug. As for heroin OD’s in Washington Square Park, according to precinct figures, there have been two year to date, including one as recently as Feb. 27. Neither overdose was fatal, though, with the individual in each case revived with Narcan.

A few weeks ago, a pot vendor told The Village Sun that there had recently been two overdoses in the park’s northwest corner. It was not clear, though, if these were the same ones that the police cited. The police report for the Feb. 27 OD did not mention a location within the park.