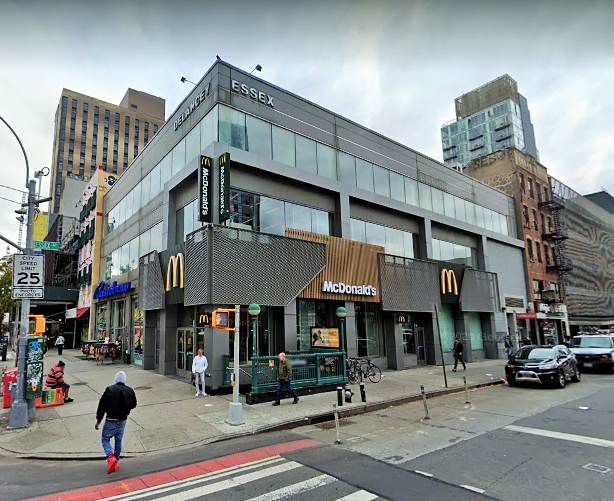 The victim was outside the McDonald's at Delancey and Essex Streets. (Google Street View)

BY THE VILLAGE SUN | A man was stabbed out of the blue in front of the McDonald’s on Delancey Street on Monday night, police said.

According to cops, the 42-year-old victim was in front of the fast-food burger place at 114 Delancey St., at the corner of Essex Street, around 11:40 p.m. on Oct. 10, when a stranger came up to him. Unprovoked — and without uttering a single word — the man stabbed the victim once in the chest with “an unknown sharp object.”

The attacker fled into the Delancey/Essex Street subway station. The victim was removed to Bellevue Hospital in stable condition.

The Village Sun asked a police spokesperson if there was any more information about the seemingly random stabbing and what might have prompted it — such as a remark, a look, a bump or the like.

“The victim approached the perpetrator,” the spokesperson said. “No statements were made.”

The suspect is described as roughly in his 50s, with a medium build and last seen wearing a black-and-white, pinstripe-style jogging suit with thick white stripes on the sides of the arms and legs, a gray bucket hat, black sneakers and carrying a small black bag slung across his chest.

Video of the alleged suspect fleeing into the subway. (M.T.A.)

Police provided a surveillance photo and video of the alleged suspect evading the fare in the subway station, which were obtained from the Metropolitan Transportation Authority.