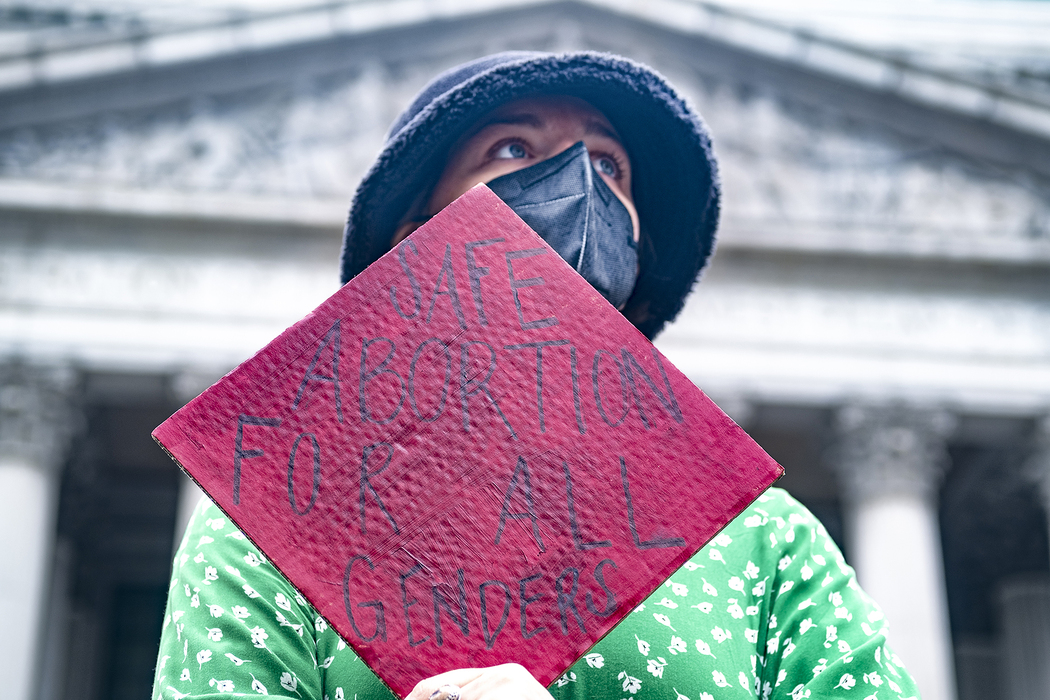 A protester at a rally on May 3 in Foley Square after the Supreme Court's intent to overturn Roe v. Wade was leaked to the press. (Photo by Milo Hess)

Raging over Roe ruling, activists to march and rally in the Village and Union Square

BY THE VILLAGE SUN | They’re red with rage but they’ll be wearing green.

Following the U.S. Supreme Court’s overturning of Roe v. Wade, activists and allies will gather to “rage” at Washington Square Park tonight at 6:30 p.m. to protest the stunning reversal on reproductive rights.

A bit later on, at 8 p.m., reproductive justice groups will come together in Union Square “to provide a space for community and care.” 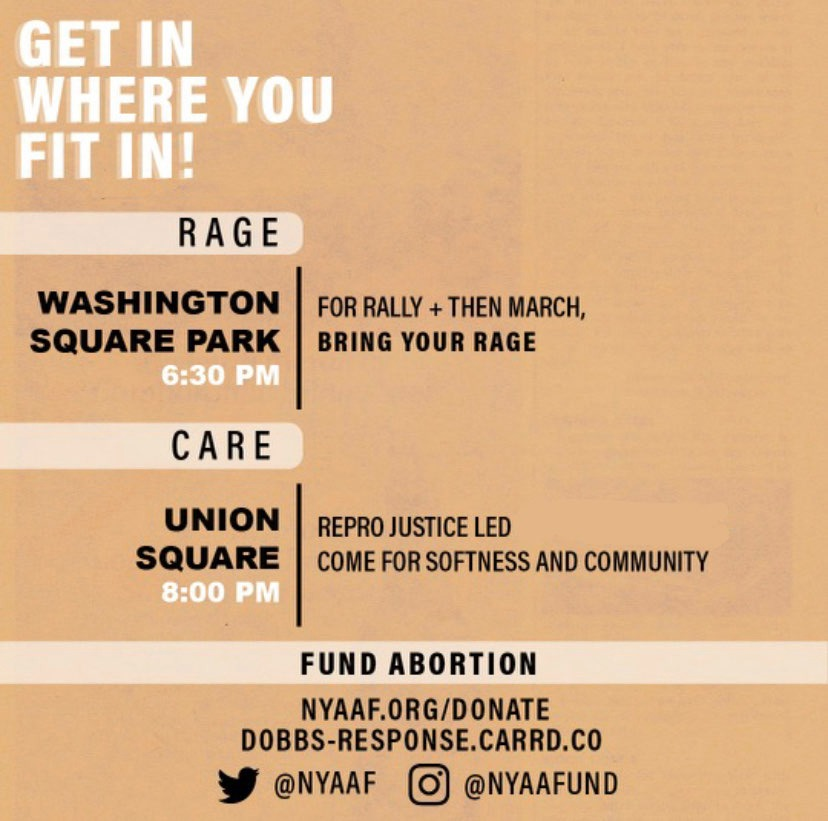 City Councilmember Erik Bottcher blasted out to his e-mail list the announcement about the rally and march, along with his own reaction to the news.

“Today my heart is with all American women who have had control of their own bodies taken from them. I am filled with rage over this news. However, we cannot allow our anger to give way to despair or apathy. We must use it to fuel our actions and our voices.”

Encouraging people to join in, the councilmember said, “We will be wearing green, a color that demonstrates support for abortions that are safe, legal and accessible for all people, especially racial minorities, L.G.B.T.Q.+ community, people with disabilities, low-income people and those who are multiply marginalized.”

Other local politicians, as well as candidates for office, also weighed in on the momentous decision.

“Our collective fears about the prospects of Roe have been realized,” said state Senator Brad Hoylman. “I fear for the future of my young daughters and countless others who could be forced into government-mandated pregnancies.

“This is a devastating moment for millions nationwide,” Hoylman said, “but at least New Yorkers can take some solace in the preemptive work of our state Legislature to protect reproductive rights in New York.

“I’ll continue to work with my government colleagues and reproductive-rights advocates and experts to ensure that we continue to introduce targeted legislation to make New York a beacon for those seeking abortion care.”

Councilmember Carlina Rivera — who is one of 15 candidates running for election in the new 10th Congressional District — called for more funding for abortions for low-income women, plus free abortion medication, saying both will be needed now more than ever.

Rivera called the Supreme Court’s ruling “a shameless, deliberate attack on the basic human right to bodily autonomy, and its effects will be immediate and devastating.

“In the years before Roe v. Wade,” she noted, “New York was one of the only states where abortion was legal — and New York City served as a safe haven for women from all over the country seeking to terminate a pregnancy.

“In 2019, roughly 7,000 women came to New York to terminate a pregnancy. With 25.5 million women of reproductive age now living in the 20 states that are poised to severely restrict or completely ban abortion, that number is expected to skyrocket. We must do everything we can to ensure that these patients receive the care that, as far as I’m concerned, is undeniably their right.”

Rivera added that, three years ago, as states began passing abortion bans in the hopes of prompting a legal battle to end Roe v. Wade, she successfully fought to make New York City the first city in the nation to directly fund abortion services. The City Council now allocates $250,000 in municipal funds annually to the New York Abortion Access Fund, which covers the cost of abortion services for patients who can’t afford it, whether they live in New York or are coming from out of state.

In addition, in June, shortly after it became clear that the Supreme Court intended to overturn Roe v. Wade, Rivera introduced legislation that would require all city-run healthcare sites to offer U.S. F.D.A.-approved mifepristone and misoprostol — better known as “medication abortion” — to patients at no cost.

“Roe was originally decided nearly 50 years ago,” Rivera said. “Most people alive today, myself included, have no memory of the United States without a federally guaranteed right to an abortion — and until recently, many never imagined that right could be lost. As NY-10’s representative and a lifelong champion of abortion access and reproductive rights, I’ve been in the trenches of this fight even before my first days in public office — and I will not rest until we deliver the same level of abortion access we have in New York to everyone in the U.S., starting with working to codify Roe into law [in other states].”

“The U.S. Supreme Court took reproductive rights back half a century today,” she said. “Women of color and women in Republican-controlled states will undoubtedly be disproportionately impacted. We in New York were right to codify Roe; now we must make our state a bastion of abortion care. That means expanding access for New Yorkers while also welcoming pregnant people from out of state who are in need of our support.”

Lee warned that the decision is “a harbinger of further attacks on our personal autonomy.”

“The court’s erosion of a constitutionally recognized right to privacy threatens both interracial and same-sex marriage,” she said. “Republicans have been planning for this day for decades through the strategic appointments of judges who do not believe in the dignity and equality of all people. This is a watershed moment for women, people of color, the L.G.B.T.Q.+ community, immigrants, religious minorities, people with disabilities and all oppressed peoples. We must fight for each other.”

“We feared this dark day—but New York did not hesitate to prepare for it,” Hochul said. “The Supreme Court has dealt a crushing blow to all who value the ability to make decisions about their own bodies. Let me be clear: The Supreme Court has failed us, but New York State will not. Our Abortion Access Always campaign builds on efforts to ensure that everyone knows that abortions remain safe, legal and accessible here. As long as I am governor, this state will protect you.”

Tom Suozzi, a candidate for governor in the June 28 primary election, said, “I have a 100% rating from Planned Parenthood and I will continue to work to ensure that New York remains a model for safe, legal and accessible abortions. We should also seek to make New York a model for reducing unplanned pregnancies by promoting education and contraception.”