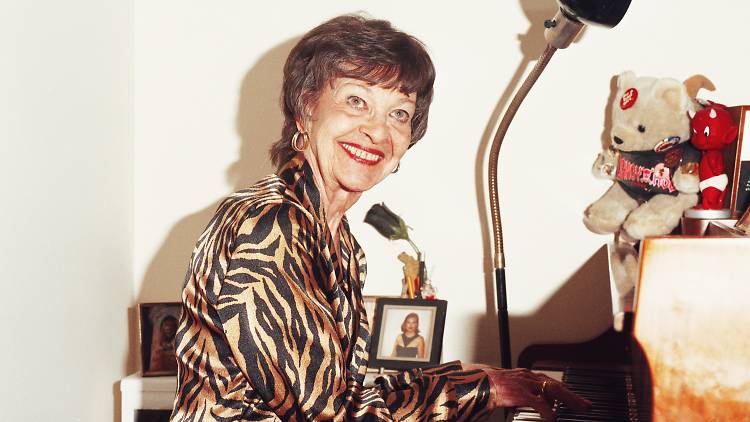 Pazienza — a Queens event planner whose family owns a Long Island cesspool business — was charged in a New York State Supreme Court indictment with manslaughter in the first degree and assault in the second degree. She faces up to 25 years behind bars.

The New York Post reported that, before pushing the victim, the defendant had been angry over her and her fiancé having been kicked out of nearby Chelsea Park, at 27th Street and Ninth Avenue, because the park was closing.

“The fiery redhead threw her food at her betrothed, stormed out of Chelsea Park, and rushed the 4-foot-11, 100-pound Gustern,” the Post said. “Pazienza’s fiancé told prosecutors that the bride-to-be had ‘several glasses of wine’ while the couple was out toasting 100 days before their wedding.”

“This was a senseless and unprovoked attack,” Bragg said in a statement. “Barbara Gustern was a beloved vocal coach who lived a vibrant and active life at the age of 87, and her loss was felt deeply by many throughout the city. After allegedly walking away from Ms. Gustern as she lay on the ground bleeding, Lauren Pazienza went to great lengths to avoid accountability for her actions.”

According to documents and statements in court, around 8:30 p.m. on March 10 on W. 28th Street, Pazienza crossed the street, shouted obscenities at Gustern — the Post reported she called her a bitch — and then intentionally shoved the longtime Chelsea resident to the ground.

Gustern — who coached Debbie Harry of Blondie, among others — fell in an arc directly on her head, causing a massive hemorrhage to the left side of her brain. Pazienza then walked away and left Gustern on the ground bleeding from her head. Eyewitnesses eventually called E.M.S. and Gustern was rushed to the hospital, where she became unconscious. She died five days later after she was removed from life support.

After the attack, Pazienza stayed in the area for around 20 minutes, where video footage shows her having a physical fight with her fiancé and watching the ambulance arrive at the scene. She and her fiancé then entered Penn Station, where they took the subway back to their apartment in Astoria, Queens.

Pazienza subsequently admitted to her fiancé later that evening that she pushed Gustern. Pazienza deleted her social-media accounts and took down her wedding Web site. She eventually fled to Long Island to stay with family.

District Attorney Bragg thanked Detective Roger Ali of the 10th Precinct and Detective Teresa Cota of Manhattan South Homicide for their work on the investigation.