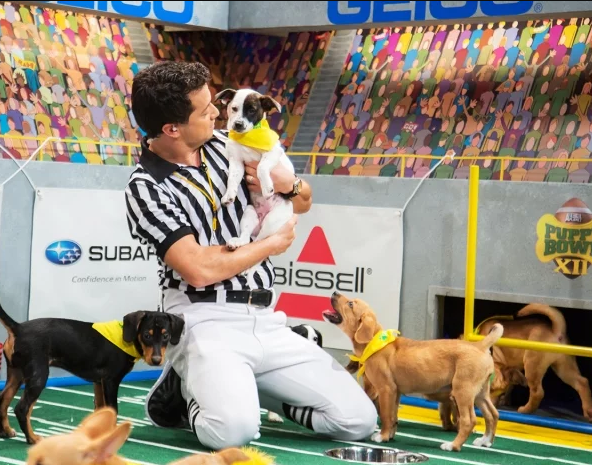 It's a tough job but someone's got to do it: Dan Schachner refs "Puppy Bowl."

BY THE VILLAGE SUN | The Tompkins Square Halloween Dog Festival will be back at its original, namesake stomping grounds this year on Sat., Oct. 22.

Adding some celebrity sizzle to this year’s East Village dog-stravaganza will be host Dan Schachner. A Stuyvesant Town resident, Schachner is the referee — or “ruffaree,” as it’s called — of Animal Planet’s annual “Puppy Bowl.” The fast-and-furry-ous, action-packed pooch affair runs every year at the same time as the NFL Super Bowl. And, in fact, it actually can be a lot more fun to watch than the human players, as Schachner tries to manage the pooch pandemonium, calling the puppies for flagrant violations like “Unnecessary Ruffness,” “A Number Two on the Two” and “Illegal Odor Downfield.”

The Tompkins Square Halloween Dog Festival (the name has now changed from “parade” to “festival”), now in its 32nd year, has earned rave reviews. “The biggest Halloween contest for dogs in the world,” CNN declared. “It’s Barking Mad,” raved The Guardian. “The best dog fashion event of all time,” proclaimed Vogue. “Where else can you see a corgi dressed as a french fries and a bulldog triceratops strut down the runway?” Time said.

The event’s Web page says registration will start at noon on the day of the event and that the competition will be at 1 p.m. However, the page also says that because spaces are limited this year, participants must preregister. Volunteers are also needed. Sponsorship opportunities are still available. To preregister or for information on volunteering and sponsorships, click here.