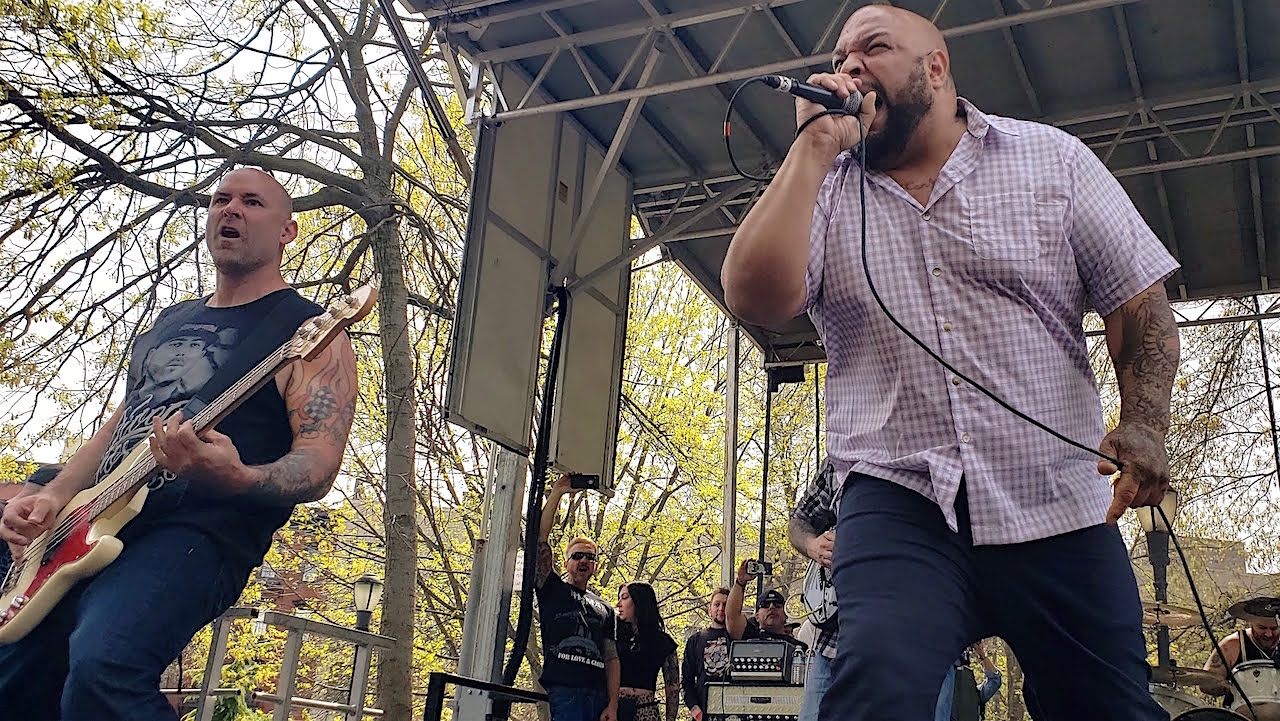 Wisdom in Chains playing at the hardcore punk concert in Tompkins Square Park on April 24. (Photo by Everynight Charley Crespo)

Chris Flash and The SHADOW plan to return to Tompkins Square Park this Sunday with another punk rock concert — even after the Parks Department recently declared it was pulling Flash’s permits for the next two years.

However, the Parks Department told The Village Sun on Thursday that a permit has not been issued for the June 6 concert.

The event, which is posted on Facebook, is billed as “The SHADOW presents: Free Speech is Not Free!” It’s open to all and is scheduled to run for five hours, from 1 p.m. to 6 p.m.

Bands on the bill include Hello Mary, Girl Dick, Sewage, Sea Monster, Wer and The Voluptuous Horror of Karen Black. The plan is for the music to be amplified. Speakers are listed as part of the lineup.

The Facebook post notes that after the big concert in the park on April 24, which Flash presented with Black N Blue productions, he filed suit in federal court against New York City and the Parks Department.

The Parks Department and city “used LIES as the basis for revoking our remaining permits for 2021,” the post states. “Come to this political rally and hear all about the abuse of power being exercised by a lame-duck mayoral administration that will be GONE in just seven months.”

The Parks Department told the media that Flash’s permit for the April 24 show misleadingly labeled it a 9/11-themed event. A number of outlets — including Gothamist and WPIX — ran with this allegation as fact, reportedly without checking it first with Flash. However, according to Flash, that permit was voided, so it was Parks that actually was doing the misleading.

Parks also slammed the event’s size — claiming that an estimated 2,000 attended — the fact that not everyone wore a face mask or practiced social distancing and that some drank alcohol. But the event’s organizers counter that they should not have been expected to accurately predict the turnout months in advance nor to enforce mask-wearing and no alcohol — since asking people to wear masks can lead to fights and police officers on hand at the event did not issue any summonses for alcohol.

On Thursday, a Parks Department spokesperson indicated to The Village Sun that, basically, Flash does not have the official O.K. to hold the event.

“We have not received a permit application for this event,” the spokesperson said.

According to Parks, the April 24 show had multiple violations, including and in addition to those mentioned above that Flash disputes regarding crowd size, face masks, social distancing and alcohol.

For example, Parks says, the mayor’s executives order banned gatherings of more than 200 people, as well as amplified sound from being used in conjunction with a stage. Also, according to Parks, the April 24 event violated the application agreement and department rules against vehicles in the park (at least one vehicle drove into the park) and against use of a stage (the organizers brought in a stage).