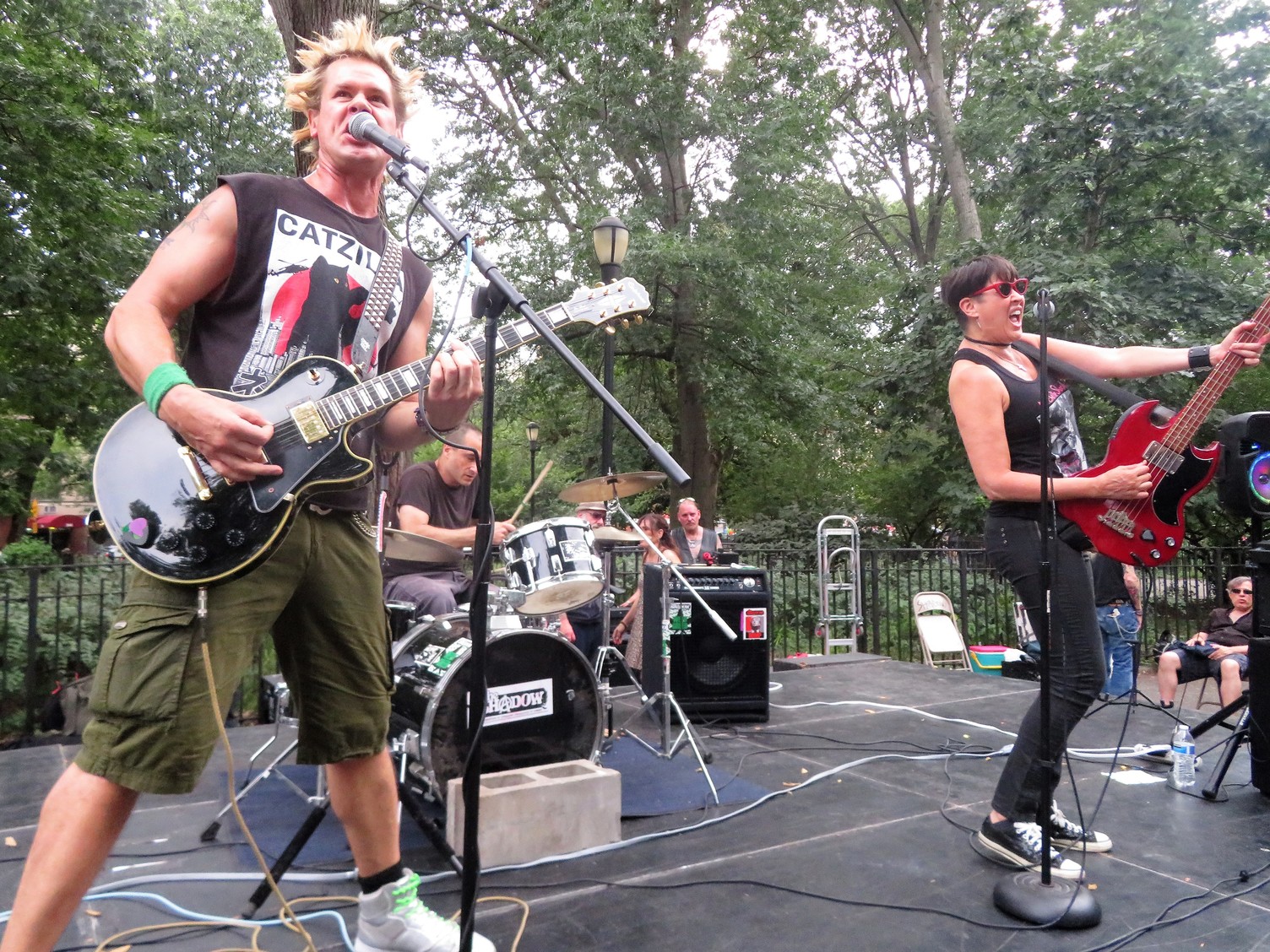 BY EVERYNIGHT CHARLEY CRESPO | “Free speech is not free,” says Chris Flash, publisher of the local anarchist newspaper The SHADOW.

“It cost us a lot of money to get free speech,” he said.

Flash was speaking of a legal battle he waged in U.S. Southern District Court after the New York City Department of Parks and Recreation revoked his permits for political rallies and concerts following the flap over a densely packed event in Tompkins Square Park on April 24. On that afternoon, Flash and Cuzin Joe of Black N’ Blue Productions presented several speakers, plus performances by Madball, Agnostic Front, Bloodclot, Wisdom in Chains and the Capturers.

Local politicians and media reported that the event drew thousands at a time when state regulations capped outdoor gatherings at 500 people. They also charged that most attendees did not follow safety protocols. including wearing face masks or social distancing, that park regulations were violated, including the prohibition of alcohol consumption, and that the event permit was improperly filed.

State Assemblymember Harvey Epstein happened to walk through the park during the concert on April 24 and voiced his disapproval of the scene on his social media. The subsequent outrage in civic and media circles, perpetuated largely by people who were not present at the event, alarmed the higher authorities. The de Blasio administration responded to the commotion by insisting that Flash and Shadow Press would be denied event permits for the park for two years.

“We will not give up without a fight, I assure you,” Flash told this reporter on April 28.

The attorney for Flash and Cuzin Joe fought the revocation of seven event permits for 2021 that were previously approved by the Department of Parks and Recreation. Three of the seven dates passed as Flash awaited the conclusion of the negotiations, litigation, arbitration or whatever it would take to get back on the permit calendar.

On Aug. 6, the day before the first of the two weekend shows scheduled in Tompkins Square Park, a federal judge signed a stipulation and settled the matter. The legal action reportedly cost Flash and Cuzin Joe about $10,000.

“If you have $$$$$ for lawyers, you too can fight the state for the protection of your civil liberties, including FREE SPEECH!” Flash posted on his social media.

Flash resumed his 15-year series with what he called the Tompkins Square Park 33rd Annual Riot Reunion, on Aug. 7 and 8. Flash’s intention was for this two-day political and musical event to remind the community about the police riot in the park on August 6-7, 1988. Flash and other speakers alluded to the riot in speeches between the musical sets.

Indeed, even as Flash’s volunteer crew assembled the stage on Saturday about noon, a larger than usual number of police and Parks personnel were already in Tompkins Square, particularly around the staging area. On the other side of the stage, volunteers prepared several tables to disseminate information about current community concerns.

The shows began with a slight delay on both days, with up to 100 people in the audience at any given time, listening to the speakers and live punk and metal bands.

The lineup for the rallies/concerts changed often in the few days before the weekend. Even as late as Sunday morning, bands were canceling due to the threat of rain. Spike Polite & Sewage NYC, Sea Monster, Jezo Black + the Element, Skitzopolis, Les Bicyclettes Blanches, Val Kinzler and Jonny KT performed on Sat., Aug. 7. VindictA, Hot Knives, the Nihilistics, Ruckus Interruptus and Dutch Gutz performed on Sun., Aug. 8.

In accordance with his original permit schedule, Flash and Shadow Press will present additional rallies with live music in Tompkins Square Park on Sept. 25 and Oct. 30. Flash will announce the details on these events as the dates approach. As always, these events will be free to the general public.

“Three months and many thousands of dollars later, we finally retrieved what the Parks Department took from us without justification, simply because a low-life politician embarrassed the mayor and Parks commissioner on Twitter after our April show in the park,” Flash posted on social media.

A Parks Department spokesperson on Monday confirmed to The Village Sun that Flash’s remaining permits would be restored.

“We issued the permit for this past weekend’s event and plan to restore the organizer’s two remaining permits for the fall,” she said.

Asked why Parks had decided to restore Flash’s permits, the spokesperson said, “We came up with a mutually satisfactory solution that protected the interests of park users, the neighbors and the applicant. The measures we put in place will hopefully address previous problems (crowd control, sound mitigation, etc.).”

The spokesperson did not immediately respond to requests for details on the measures for crowd control and sound mitigation.