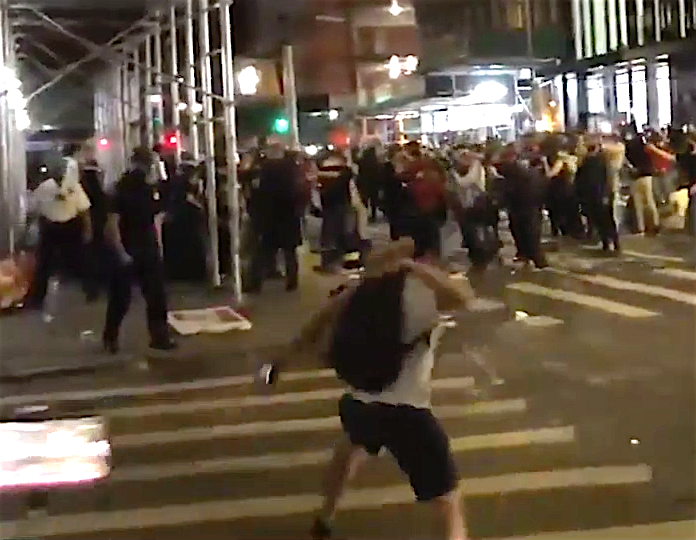 A screen grab from a video showing a man about to throw a brick at cop's head in front of the Strand bookstore. (Courtesy N.Y.P.D.)

If two violent men who beaned cops outside the Strand get caught, they’ll likely get the book thrown at them.

The pair — one with a stick, the other with a brick — viciously assaulted two police officers, going for their heads, in a chaotic clash outside the famed bookstore on the evening of Sun., May 31.

Police said that a lieutenant and a police officer, around 10:30 p.m., were trying to take a group of protesters into custody who were resisting arrest outside 828 Broadway, at E. 12th St., near Union Square.

During the struggle, one of the suspects ran up behind the lieutenant and, winding up and using all his might, clubbed him in the back of the head with a stick.

Meanwhile, the second man heaved a brick at a different police officer, striking him in the front of his head.

Both cops were wearing riot helmets.

The lieutenant was transported to New York-Presbyterian Hospital/The Allen Pavilion to be treated for a concussion. The other officer was not seriously injured.

The mayor’s daughter, Chiara, was arrested at the same location, but one night earlier, and had been protesting peacefully.

All tips are confidential.