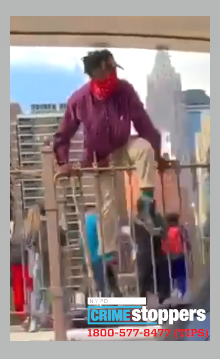 The suspect hops over a fence before fleeing along the Brooklyn Bridge roadway. (Courtesy N.Y.P.D.)

Protester rains cane blows down on cops on bridge

He raised cane — and smashed it down on the heads of police officers.

Police are looking for a man who assaulted three officers — with either a cane or pole — while they were trying to arrest a protester who had jumped down onto the roadway of the Brooklyn Bridge.

The suspect was on the bridge’s pedestrian path above the cops and whacked them with the weapon twice. Photos posted on the Police Department’s Twitter page showed several officers with bloodied heads — though it wasn’t clear if their injuries were from the raps by the man’s pole or the donnybrook versus the rest of the Black Lives Matter protesters that also occurred on the bridge.

This is not peaceful protest, this will not be tolerated. pic.twitter.com/cYuDX8G7ku

The injured police were taken to area hospitals, treated and released.

The individual was last seen wearing a purple shirt, tan pants and a red bandana around his face, and running on the roadway toward the bridge’s exit ramp.

The New York Times reported the marchers on the bridge were heading to a rally with clergy at City Hall Park. According to the paper, by day’s end, 37 people had been arrested in or near the park, six of them for felony assault.