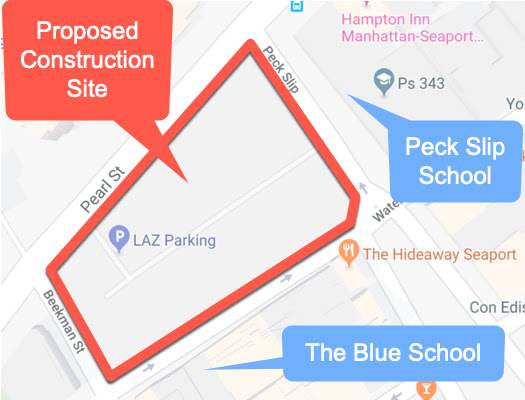 A map showing the South St. Seaport-area parking lot on which Howard Hughes Corporation is seeking to build a massively oversized project.

Parents, if you are looking forward to next year as a better year for our kids at school, think again. Starting in 2021, in every direction around these schools, expect the staging of heavy construction vehicles, trucks backing up, cranes, steel beams, debris piles and daily disruptions to learning if Howard Hughes Corporation (HHC) is allowed to blow through the historic 120-foot zoning in the Seaport Historic District.

As we all work at holding homeschooling, jobs, mental health and our finances together, HHC is lobbying OUR local representatives to get permission to harm our children by throwing out the low-scale zoning laws governing the lot next to P.S. 343, the Pre-K Center and Blue School.

Just as our kids are going back to school and working hard to make up the year and half of educational and emotional ground lost to the pandemic, HHC’s five-year construction project on two 470-foot-tall towers looming over the heads of our children is planned to begin.

But, it can be stopped… . If HHC is held to the current zoning of 120 feet, work on a smaller project would be done in just under a year. Confoundingly, though, our elected officials are siding with the developer over the well-being of our kids and the protections of the historic district.

Councilmember Margaret Chin, along with Manhattan Borough President Gale Brewer, are aligning with big real estate instead of city residents. Both of these career politicians are term-limited and as such seem to not have to answer to anyone except their biggest donors.

Our schools’ play streets and roof-deck recess areas will be shuttered and our kids will be locked inside where they will need to battle against constant and intense noise for the next five years. Access to fresh air, space and a quality learning environment could not be more critical while our city battles back from COVID.

If we don’t act now, the Pre-K Center, Peck Slip and Blue School students need to prepare for a half decade of heavy construction on the acre-wide site across the narrow cobblestone street from the schools.

What can you do to help? Join the fight. Sign up for Children First and Seaport Coalition newsletters to learn where, when, how to bring your voice to the forefront of this attack on our children, our neighborhood and New York City’s history.