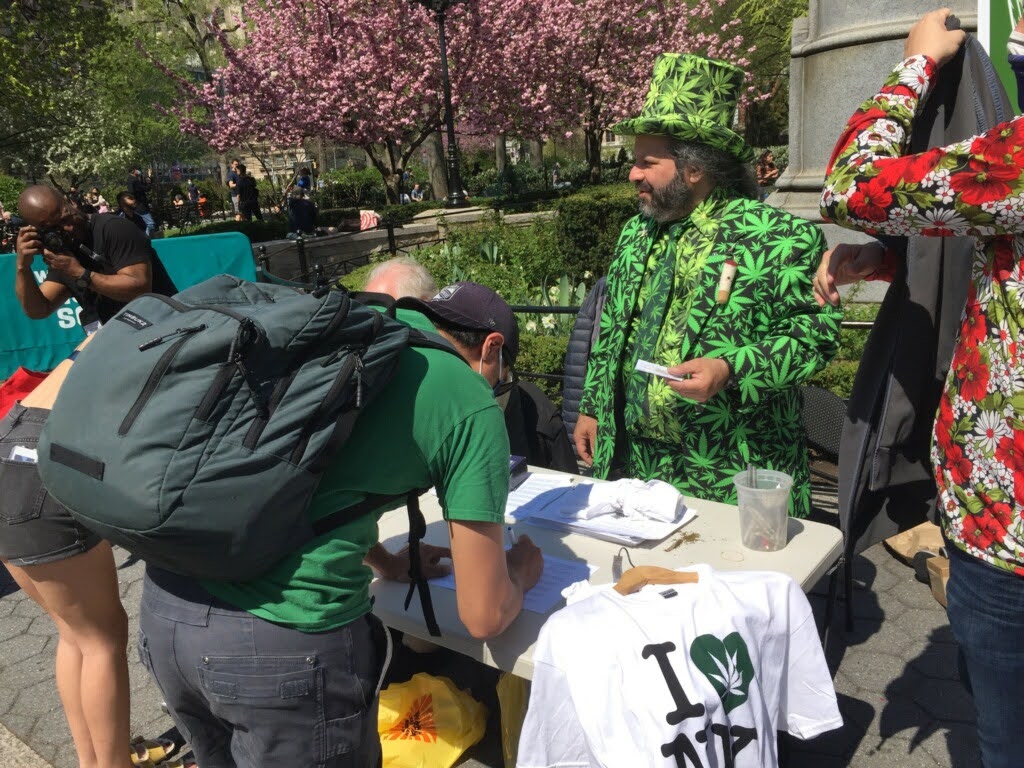 People got free joints for proof of COVID vaccination at "Joints for Jabs" at Union Square on April 20 a.k.a. 4/20. (Photo by Jefferson Siegel)

Yo, Chuck, put the bud in the stimulus budget!

Pot advocates will be pushing their agenda and also rewarding people for getting vaccinated at an event outside Chuck Schumer’s residence in Park Slope this weekend.

On Sun., July 25, at noon, marijuana advocates, including healthcare and AIDS activists, will gather outside the Senate Majority Leader’s Brooklyn pad to press him to include pot legalization in the $3.5 trillion stimulus package currently being debated in Washington, D.C.

Advocates also will simultaneously stage the fourth installment of the “Joints For Jabs” program, which gives a marijuana joint to people over age 21 who show proof of COVID-19 vaccination.

Joints will start being given out at noon along Prospect Park West across from Schumer’s residence, which is a block away from Grand Army Plaza, and keep going until the grass runs out. The overall event will continue until 4:20 p.m.

Attendees are encouraged to wear face masks and social distance.

Dubbed the “Chuck Schumer Edition,” this round comes on the heels of the last “Joints For Jabs” event, which gave away 1,400 spliffs after New York City’s Queer Liberation March in June. April 20 saw a “Joints for Jabs” at Union Square.

Like prior “Joints For Jabs,” Sunday’s event is sponsored by ACT UP New York (AIDS Coalition To Unleash Power), with additional support from Empire State NORML (National Organization for the Reform of Marijuana Laws), Housing Works, Rise and Resist and other healthcare activist groups.

Advocates are particularly concerned that medicinal marijuana is being left out of the stimulus package.

“For the past few weeks, we’ve heard every issue and topic discussed as a potential part of the stimulus package except marijuana,” said Brandon Cuicchi, a member of ACT UP.  “It shows that Republican and Democrat lawmakers are out of touch with patients and others who use marijuana medicinally, like people with H.I.V. and AIDS and other long-term conditions.”

Other activists think that marijuana decriminalization and legalization should be included in the budget.

“Decriminalizing marijuana nationwide would begin to repair the damage done by 50 years of a failed drug war,” said Dana Beal, the longtime legalization activist. “Marijuana legalization can provide its own stimulus to the economy while establishing a funding stream for long-overdue universal healthcare in the United States.”

In fact, on July 14, Schumer released a “discussion draft” of a bill that would federally legalize pot, even though President Biden opposes it. Under the bill, states could set their own laws on pot possession.

Speaking to The Village Sun, Beal said, “We want them to put marijuana in the reconciliation [bill]. It could fit in there since it’s a tax bill — a 25 percent federal tax rate on weed. That would be a lot of money, man. Maybe they could pay for Medicare [for All].”

The tax in Schumer’s bill would be used to help minority entrepreneurs start up pot dispensaries since minorities have borne the brunt of marijuana arrests and incarceration, according to advocates.

The pot supporters’ motto is “Put kind bud in the bill.” An earlier version, “Put killer weed in the bill,” was probably not the best messaging, Beal conceded.

In fact, pot can save lives, he said, noting, “Opiate deaths drop in states where they legalize weed.”

Beal added that a Zoom meeting with a Schumer staffer on Wednesday went great and that another is planned. 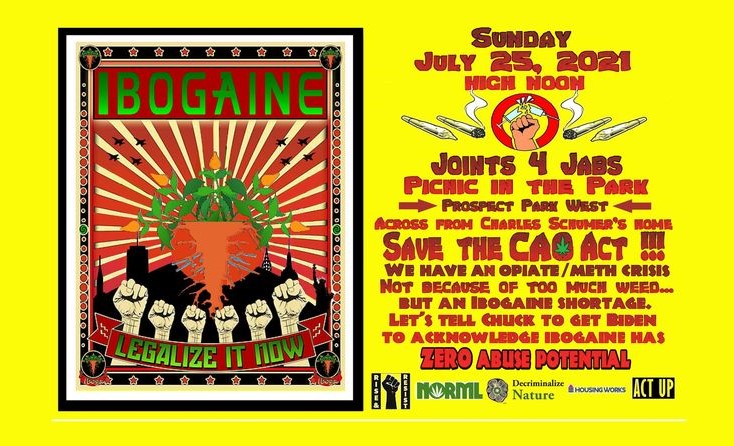 Also at the event, Beal will be advocating for the “descheduling” of ibogaine. A naturally occurring psychedelic derived from an African plant, ibogaine is touted by Beal and others as an addiction cure. It has a 41 percent success rate for opiate addiction, according to the longtime Yippie and former Bleecker St. resident. However, ibogaine is currently a Schedule 1 controlled substance in the United States and is not approved for treatment.