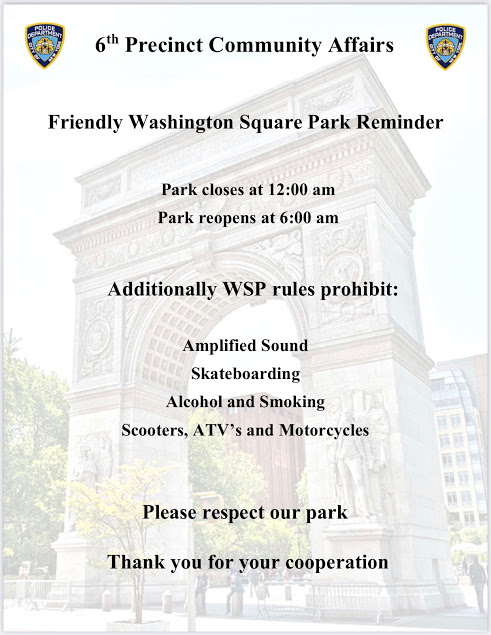 The Sixth Precinct issued a flier on Monday stating that Washington Square Park closes at midnight and listing some uses prohibited in the park.

BY THE VILLAGE SUN | The party’s over — literally.

With New York University’s semester ended and now Pride also in the books, the police are moving ahead, as of tonight, with closing Washington Square Park at its traditional normal closing time, midnight.

Whatever amount of officers that police feel are needed to close the park reportedly will be there.

Obviously, Shaman a.k.a. David Ortiz, 28, the Queens party promoter, and other deejays who have been throwing exuberant raves in Washington Square, will not be happy about this. But neighbors who have been loudly complaining about the loud late-night revelry — including amplified music, wheelie-popping motorcycles, fireworks and people relieving themselves in the park — will be relieved.

Last Thursday, The Village Sun first reported that police intended to start enforcing the park’s midnight closing time today. This afternoon, the Sixth Precinct issued a flier to make the message clear that this, in fact, is what police plan to do. Moving forward, the cops plan to keep shutting the park at midnight every night.

Dubbed a “friendly reminder,” the Village police precinct’s flier explains that the park closes at 12 a.m. and reopens at 6 a.m. It adds that prohibited uses in the park include amplified sound without a permit, skateboarding, alcohol and smoking, as well as riding scooters, ATV’s and motorcycles.

“Please respect our park. Thank you for your cooperation,” the flier concludes.

Police are not waiting until the end of the night to start enforcement, however. Today there were a total of 24 police officers inside the park, letting people know the rules. Anyone entering the square with an amplifier or a party speaker was being informed that it is a prohibited use.

As for skateboarding in the park — a bugaboo of many locals, particularly older residents, who fear they will get knocked down and injured by the young shredders — police are currently leaving it to Parks Enforcement Patrol officers to deal with.

According to the Sixth Precinct, moving forward, additional police officers will continue to be assigned to Washington Square Park both during the day and at night.