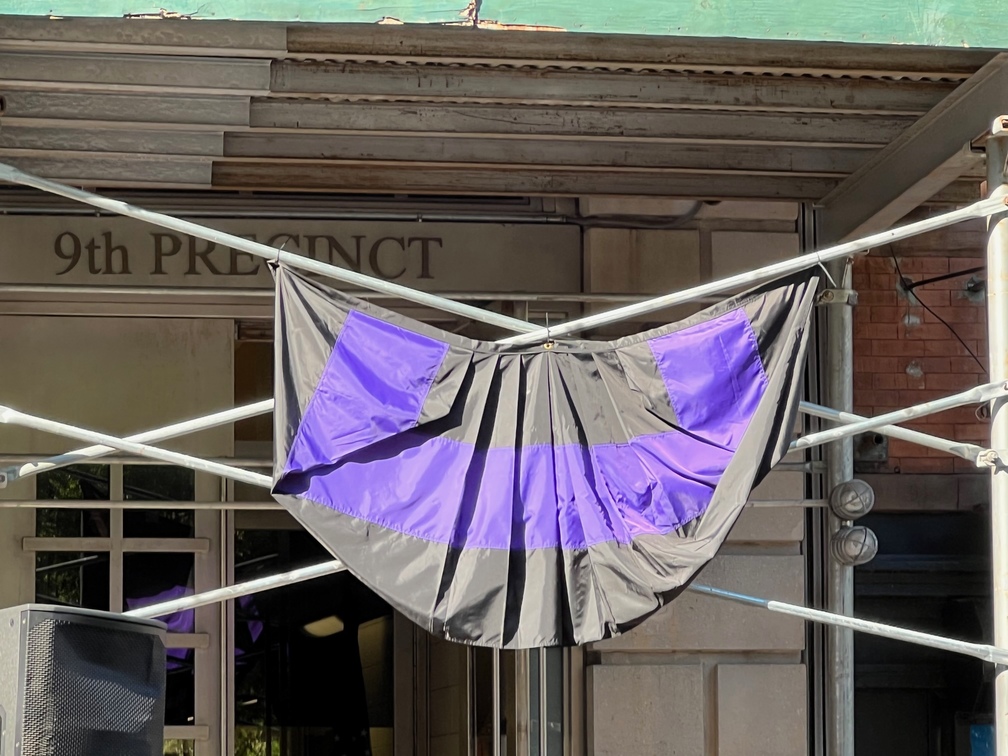 Purple bunting was draped outside the East Village's 9th Precinct in honor of the fallen officer. (Photo by Bonnie Rosenstock)

BY SEAN O’CEALLAIGH | A decorated New York Police Department detective and longtime resident of Stuyvesant Town who died of a self-inflicted gunshot wound was laid to rest in the Hamptons on Sat., Aug. 7.

The N.Y.P.D. did not release his name. The Daily News, however, identified him as Brendan McVeigh.

Sources said he was discovered by his fiancée on Sun., July 31, in Belle Harbor on the Rockaway Peninsula shortly after 11 p.m., where sources said he had recently bought a home.

In its initial report, the N.Y.P.D. said, on Sun., July 31, around 11:30 p.m., police responded to a residence within the confines of the 100th Precinct for a male shot (possibly an off-duty police officer). Upon arrival, officers encountered a male off-duty N.Y.P.D. officer with a self-inflicted gunshot wound to the head.

“E.M.S./E.S.U. responded to the location and transported the aided male to an area hospital, where he remains in critical condition,” the report said.

He apparently hung on while on life support for the next 12 hours but, after being taken off life support, succumbed to his wound without regaining consciousness.

In its update the next day, an N.Y.P.D. spokesperson revealed the suicide.

“On Monday, August 1, 2022, the off-duty UMOS [uniformed member of the service] succumbed to his self-inflicted injuries and was pronounced deceased at Kings County Hospital,” the spokesperson said.

Purple bunting was put up outside the 9th Precinct in the East Village where, according to sources, the 28-year-old deceased officer was stationed.

The funeral was heavily attended by N.Y.P.D. colleagues and members of other uniformed services, as well as former classmates and parents from the Epiphany School, at 234 E. 22nd Street, where the victim attended elementary and middle school, and Poly Prep, the exclusive Brooklyn high school he attended. Sadly, he became the second former Poly Prep student to die by suicide this summer.

The wake was “slammed,” said one neighborhood resident who had journeyed to the wake at the R. J. O’Shea Funeral Home in Hampton Bays. The Mass of Resurrection was at St. Rosalie’s Church in Hampton Bays, and he was laid to rest in the Sacred Heart of Jesus & Mary Cemetery in Southampton last Saturday.

Friends had erected a makeshift memorial at Spikes (formerly Horsebox), the local on Avenue A that he and his fiancé, a bartender at another East Village watering hole, frequented. It consisted of an empty bar stool and a pint of Guinness and several shots of Jameson Irish Whiskey on the counter in front of it, as local mourners turned up to console one another after news of the tragedy spread.

One friend told The Village Sun he had encountered his fallen friend at The Wharf Bar & Grill, in Far Rockaway, only the day before the victim shot himself.

“He seemed fine. It didn’t appear that there was anything bothering him,” said the friend, who did not want to give his name.

No motive was given and he apparently did not leave a note. He was survived by his mother. The victim’s father had been killed several months after the 9/11 attacks when he was only eight years old.

He became the third N.Y.P.D. officer to take his own life this year. In 2019, 10 police officers took their own lives and, in response, the N.Y.P.D. created “Finest Care,” a suicide prevention hotline that offers free treatment from Northwell Health psychiatrists and psychologists.

Four officers died by suicide in 2020 and three took their own lives in 2021, according to the New York Post.

The family has asked that donations be made to the Stephen Siller Tunnels to Towers Foundation.