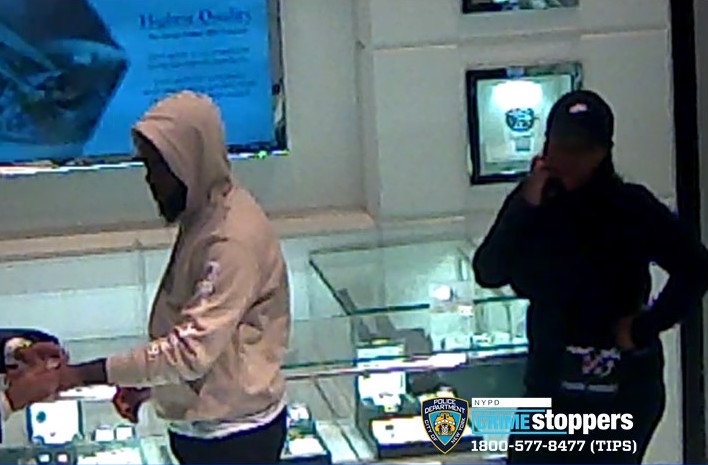 BY THE VILLAGE SUN |

According to police, on Tues., Sept. 17, at 10:15 p.m., an unknown individual removed a 29-year-old victim’s wallet while inside of Facebook’s offices, at 770 Broadway, while her bag was left unattended. The New York Police Department is asking for the public’s assistance in identifying two individuals depicted in connection with a grand larceny that occurred in the Ninth Precinct.

Later in the evening, an unknown male and female used the victim’s credit cards to make several purchases while inside of Macy’s, at 151 W. 34th St.

Police released photos of the pair making purchases inside the department store.

Anyone with information is asked to call the N.Y.P.D.’s Crime Stoppers Hotline at 1-800-577-TIPS (8477), or for Spanish, 1-888-57-PISTA (74782). Tips can also be submitted on the CrimeStoppers Web site at WWW.NYPDCRIMESTOPPERS.COM or on Twitter @NYPDTips. All tips are strictly confidential.

Police said that on Thurs., Nov. 14, around 2 p.m., an unidentified man entered Cure Thrift Shop, at 111 E. 12th St., and reached over the counter to remove jewelry as a store clerk was helping other customers.

The crook then fled on foot with the bling, valued at roughly $6,375. There were no injuries reported.

The suspect is described as black, with a medium build, and last seen wearing a red-and-blue jacket, dark-colored pants, dark-colored hat, tan boots and eyeglasses.

Anyone with information should contact the confidential Crime Stoppers Hotline.

Police said that on Sat., Nov. 9, around 2:16 p.m., a man used a stolen Chase credit card to make roughly $300 worth of unauthorized charges at the CVS and Walgreens stores at Astor Place and Third and Fourth Aves. The card was previously reported stolen by its 23-year-old owner.

The suspect is described as white, with a medium build, and last seen wearing an orange jacket, with a green hooded sweatshirt, brown hat, black pants, white sneakers and carrying a black bookbag.

Anyone with information should contact the confidential Crime Stoppers Hotline.