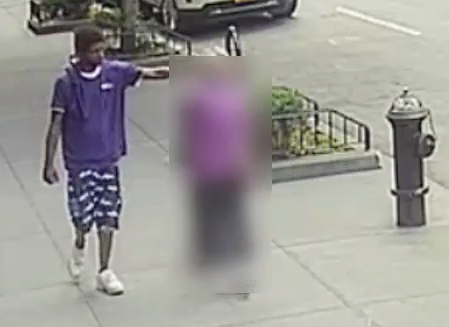 Police announced they have made an arrest of a man who, in a random attack, callously punched an elderly woman in Gramercy, sending her toppling to the pavement.

As the man passed the frail senior, he nonchalantly poked out his fist, knocking her over, causing her to strike her head on a fire hydrant. He then looked back at her over his shoulder as he continued on his way.

The victim was transported to Mount Sinai Beth Israel Hospital in stable condition.

The incident was captured on surveillance video, which police released to the news media.

On Tues., June 16, around noon, police arrested Rashid Brimmage, 31, of the Bronx, and charged him with assault.

The Daily News reported that Brimmage, in fact, is a recidivist offender with more than 100 arrests, including for sexual abuse and groping women on the subway, public lewdness, harassment and criminal trespass.

According to the News, Brimmage was living on the street when he attacked the woman.