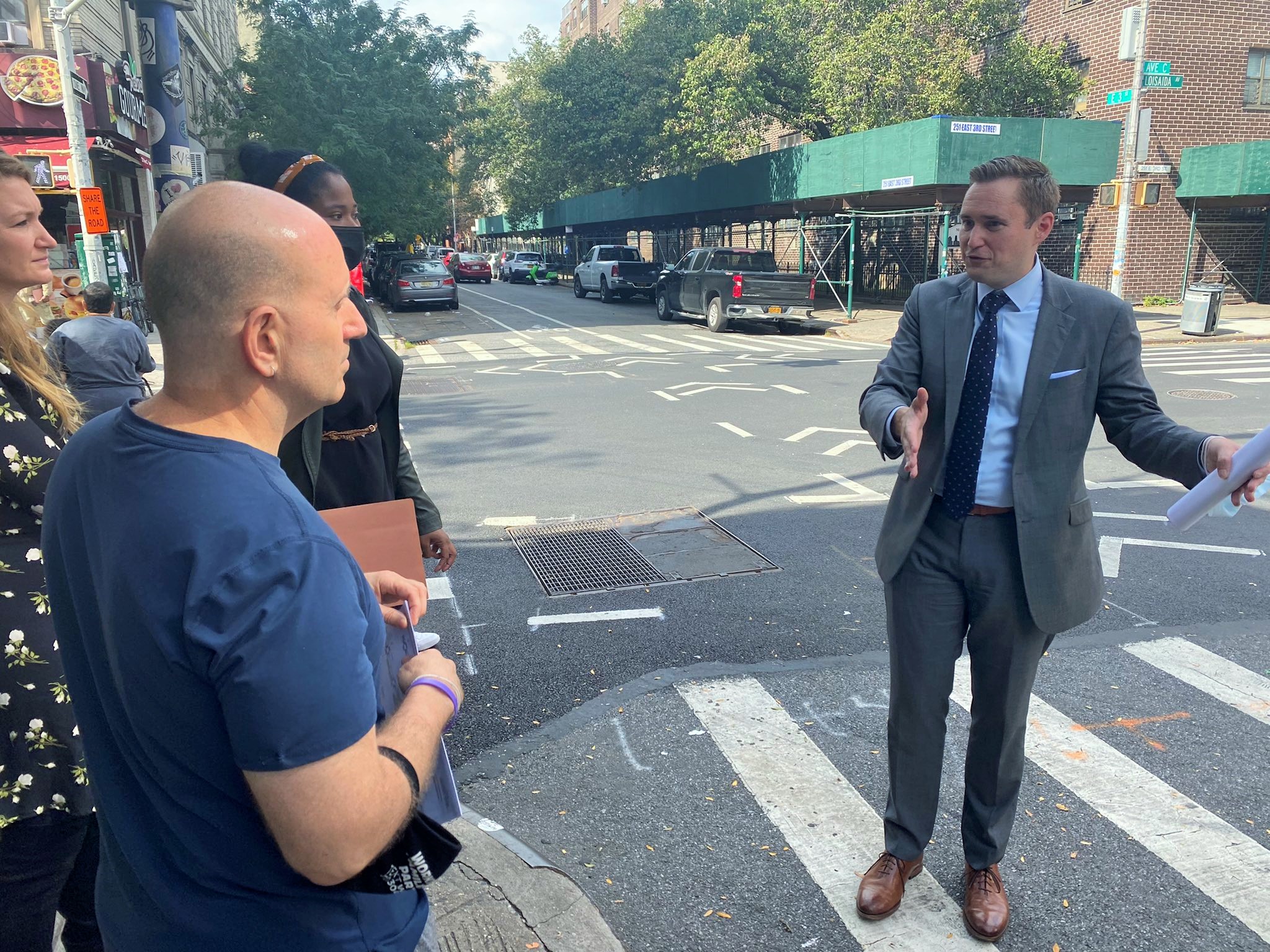 BY LINCOLN ANDERSON | The Avenue C bike lane is “a mess.”

So says a local politician who did a walk-through of it with a top Department of Transportation official last week. And the main reason why is that outdoor dining sheds are being allowed to stay pushed up right next to the curb — where the bike lane is supposed to be.

“Right now, it’s a mess,” Assemblymember Harvey Epstein told The Village Sun. “The issue is a lot of the sheds are on Avenue C and the mayor is not requiring anyone to move the sheds that are in the protected bike lane.”

As a result, cyclists have to ride in a risky sort of slalom if they want to use the patchwork bike lane, weaving in and out of active car traffic.

“It’s dangerous if bikes have to swerve out into traffic and then come back in [to the bike lane],” Epstein said, “and the lanes aren’t done well.

Not being “done well” includes the fact that the bike lane has not even been painted green on some of the streets north of E. 10th Street, “so it doesn’t look like a bike lane,” the assemblymember noted.

“All we’re saying is move your shed out into the street [a few feet away from the curb] so we can put in the bike lane,” he said. “The sheds are not supposed to be there forever. They’re made of wood. D.O.T.’s saying the sheds don’t have to be moved.”

There is also a safety concern about areas where the bike lane passes through a bus stop. These mixing spots need clear street markings, Epstein urged.

‘This is about safety on our streets.’

As Epstein put it, “If you can’t bike up the East River Park, you need an alternative route.”

In fact, the East River Park bike path is set to close sometime next month as the hotly opposed E.S.C.R. project is poised to start — but, clearly, the Avenue C bike lane is not currently in good shape to serve as a suitable substitute, with the mayor authorizing the sheds to stay put.

Epstein said the city needs to do something — for safety’s sake.

Epstein added that, during the colder weather, now that indoor dining is back to 100 percent capacity, the outdoor sheds won’t even be used that much — if at all.

“Fifty percent of the space has to be open,” he noted of the sheds’ design that calls for two of their four sides to be left completely open to the air. Obviously, though, most operators violated that regulation this past winter, and critics say the city’s enforcement of the sheds’ rules has been laughable.

“I love eating outside,” the pol said. “I want to support my small businesses. But now that I can eat inside during the winter, I probably will.”

So there’s no reason why the sheds should be blocking bike lanes, especially in the cold weather, in his view.

The solution, as he sees it, is pretty simple.

“I think they should have sheds that are movable,” he said, adding, “There are a lot of options available” for how that could be done.

Another reason for making the structures easily movable, he said, is what happened on Avenue B, where D.O.T. workers milled the street for new paving — but noticeably skirted the spots where the sheds were sitting. Micki McGee of South Village Neighbors last week pointed out the same thing happening on Ludlow Street when residents suing the city over the outdoor sheds held a press conference there in Hell Square.

“There’s a reason that the the street was set for grinding and milling,” Epstein stated. “It means [if you don’t fix up the entire roadway] you’re going to have further deterioration of the street.”

Epstein was joined on the walk-through of the Avenue C bike lane, which runs from E. Houston Street to 14th Street, by Ed Pincar, the Manhattan borough D.O.T. commissioner.

The politician, however, doesn’t hold out hope that, in the waning days of the de Blasio administration, D.O.T. will do anything to address how the sheds are adversely impacting both cyclists’ safety and the street’s decaying infrastructure.

For now, the ULURP public review for making the Open Restaurants program is still ongoing, he noted, adding that it will then be up to the next mayor “to manage the issue.”

Beyond street safety, Epstein has other issues with the outdoor dining sheds — mainly noise. The din is especially difficult for families with young children who need their sleep and have to get up early to go to school, he noted.

Music — whether played in the sheds or piped outdoors from  bars and restaurants for outdoor diners — is a particular problem, he said.

“I’ve lived for decades on Avenue A — I know about loud noise,” he said. “I raised my kids here. But I don’t know why people who are just living their lives need to hear someone’s music all the time. A guy walking down the street with a boombox is one thing. But these bars are on residential sidestreets. Look at Poco and Cabin — they’re playing music till all hours at night.”

In general, he said, the outdoor dining program should close earlier.

“I like eating outside,” he reiterated. “I just think we should have a larger public conversation about our public space.”