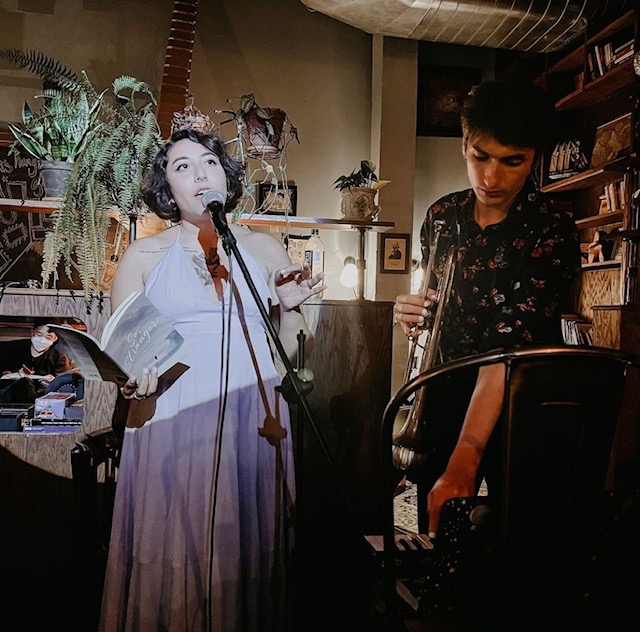 Poet Topaz Winters curates a soulful night of music and verse at ‘So, Stranger’ launch

BY BEN TOGUT | On Aug. 13, internationally celebrated poet Topaz Winters kicked off the book tour for her “So, Stranger” at Nook, a cafe and craft beer parlor in Bushwick.

Her third collection of poetry, “So, Stranger” lays bare “the sharp-edged disappointments of the American Dream narrative, while leaving space for the joy of brown bodies.” To celebrate its release, Winters gathered along with some of her favorite performers in what made for an engaging night of poetry and music.

“It feels surreal to be holding this book in my hands,” she confessed, “because this is a book I never thought I would release.”

Winters originally felt apprehensive about publishing “So, Stranger” since the book explores the poet’s complex relationship with her father. However, after one of Winters’s most vulnerable poems, “War Story with My Father,” went viral, she realized the poems that scared her were the ones she urgently needed to share with the world.

“While writing this book, I asked myself again and again what I was giving up to be an artist, to be a daughter, to be an immigrant,” she said. “But I also found immense wonder in occupying the liminal spaces between those labels.”

Throughout the launch event, various collaborators joined Winters as she read from “So, Stranger.” Poets jason b. crawford and Malvika Jolly both read poems they wrote in conversation with works from “So, Stranger.” Jordan Popky sang a haunting rendition of Winters’s poem “I Found a New World Across the Sea,” while accompanying herself on guitar. Musicians ÊMIA and Stefan Hopwood played alongside Winters as she read from “So, Stranger.” This juxtaposition of music and poetry conjured an intimate environment, allowing audience members to enter the vivid, urgent world of Winters’s latest collection.

The launch at Nook marks the beginning of Winters’s tour for “So, Stranger,” which continues through the end of this month. Winters recently read at P&T Knitwear on Orchard Street with musician and friend Paola Bennet. She’ll continue to feature artists of varying disciplines in her future shows in Provincetown, Massachusetts, three stops in New Hampshire — Keene, Manchester and Ossipee — as well Philadelphia and, two events in New Jersey, at Union City and Camden.

Winters’s new collection “So, Stranger” ($18) can be purchased online at Button Poetry.