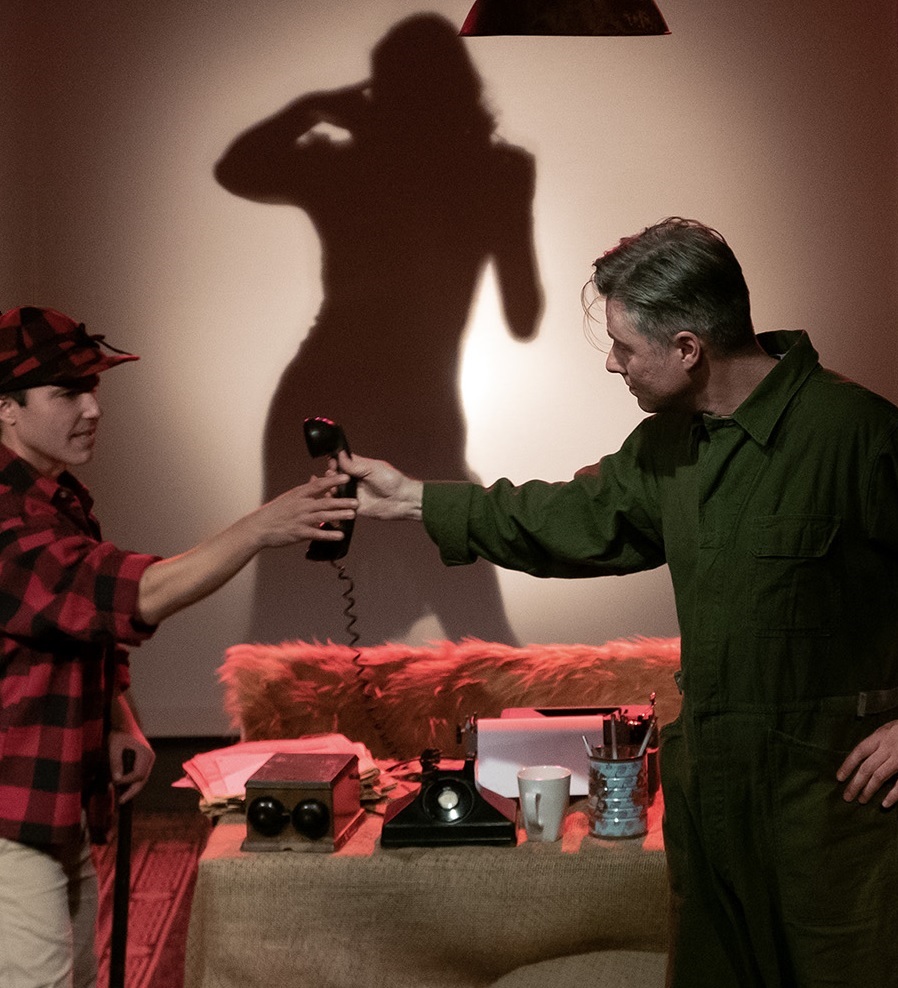 BY THE VILLAGE SUN | One hundred years after J. D. Salinger was born and nearly 70 after the publication of “The Catcher in the Rye,” his 277-page, groundbreaking novel, a new play based on the writer’s life is opening in New York City.

A movie about Salinger, “Rebel in the Rye,” looked at him and his most famous book. And now, in New York City, where he lived much of the early part of his life, a new play has opened soon after an exhibit debuted during the Salinger centennial.

The exhibit, of more than 200 items at the New York Public Library through Jan. 19, includes never-before-displayed memorabilia from Salinger’s life and work. The author’s son, Matt Salinger, the author’s widow Colleen Salinger and the J.D. Salinger Literary Trust are behind the Midtown exhibit.

The East Village’s Theater for the New City, at 155 First Ave., meanwhile, is presenting a play about the author and the book, titled “A Life In The Rye.” Written by Claude Solnik, directed by Joe John Battista and produced by Two Tough Broads, it’s running from Nov. 7 to 24.

The play looks at J. D. Salinger’s life BC — Before “Catcher…” — as well as, during and after its publication. Tickets are $18 and $15 for seniors and students for this production that puts Salinger on stage and in the spotlight.

“We’re trying to look at J. D. Salinger’s life and at how everything from experiences in World War II to celebrity affected him,” Solnik said. “He wrote what became one of the best-known books in the world and created characters that became part of our culture. Then he left New York while his work took on a life of its own.”

Tom Martin plays J. D. Salinger, the author, who interacts with his younger self, portrayed by Willem Long, in this play that at times presents a kind of dialogue between dueling Salingers.

“I wanted to show Salinger as a young man and then as a successful author,” Solnik said. “And I wanted to let the two talk to each other and the audience.”

The show follows Jerome David or J.D. Salinger from family life as a young man selling his first short story to The New Yorker, as Tony del Bono plays his father and Thami Moscovici plays his mother.

Salinger was born on Jan. 1, 1919, and grew up on both the Upper West Side and Upper East Side. He went to New York University for one year in 1936 and later to Columbia University School of General Studies. “The Catcher in the Rye” was published on July 16, 1951, by Little, Brown and Company.

After becoming a celebrity and having a virtual parade of people show up at his door claiming they “were” or identified with Holden Caulfield, Salinger in 1953 moved from 300 E. 57th St. in Manhattan to Cornish, New Hampshire.

The play looks at Salinger’s psychological and geographical journey, as well as the women in his life and how he impacted their lives and they impacted his, including Oona O’Neill, Eugene O’Neill’s daughter, played by Janel Koloski.

“He based Sally Hayes on her,” Solnik said. “He could hold on to characters in his book, keep them frozen in time, but in life, he lost Oona in a way that, I think, may have affected his future relationships.”

“I believe J. D. Salinger’s life itself is a powerful story,” Solnik said. “He created a book that became so big that, in some ways, it may have overshadowed what followed. J. D. Salinger acted on stage as a young man. I wanted to tell his story on stage.”

The play also looks at how Holden Caulfield, who became a kind of rebellious primal scream for his generation, would be claimed not just by adolescents and the general republic, but by people who assassinated celebrities.

“Salinger created a character who exists in fiction,” Solnik said. “He felt so real that, to many people, he existed beyond the pages. Some people went on to do terrible things in that character’s name. They claimed that they were motivated by the book, which, in a way, may have seemed like they were trying to steal and blame a character for things that they did.”

Wendy Tonken provides costumes for this version of Salinger’s life on stage, while Allison Hohman is production stage manager, as well as lighting and sound designer.