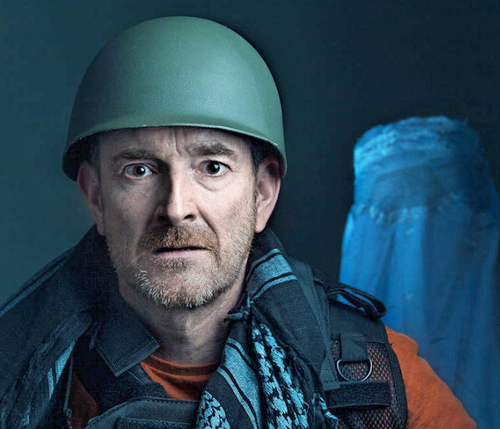 Henry Naylor starred in the one-man play, which he wrote.

Play about Afghanistan mixes humor with brutal truths of war

BY JASMINE SHIFFER | “Afghanistan Is Not Funny,” comedian and playwright Henry Naylor’s latest play, finished its run at Soho Playhouse on Sun., Dec. 11.

Naylor gave a total of eight performances, delivering his own one-man show to rapt audiences over the span of a week and a half.

In the play, Naylor tells a personal story of his weeklong trip to Afghanistan in 2002. He traveled into the war zone with photographer Sam Maynard to do research for his play “Finding Bin Laden,” which Naylor showed at the Edinburgh Fringe
Festival in 2003. “Afghanistan Is Not Funny” dramatizes the creation of that first play, and everything Naylor learned, in one long, punchy and powerful monologue.

The performance on Wed., Dec. 7, opened to a small and lively crowd. Naylor commanded the stage for just more than an hour, with nothing but a simple set of tables and chairs, plus a series of photographs projected behind him.

The city of Kabul, capital of Afghanistan, comes to life in those pictures, as Naylor describes dodging land mines and war criminals, encountering both the Taliban and the mujahideen.

Naylor plays several different characters: his friends and coworkers, his therapist, even his agent, who warns him from the start that Afghanistan, as a subject, is not funny.

But Naylor’s background is also in comedy. He has written satire for television — including the show “Spitting Images” — and for BBC Radio 2. All of his wit and absurdity are at work in “Afghanistan Is Not Funny,” and the play quite often is very funny. Naylor makes light of his blunders and travails — the soldiers he thought would kill him posed for photos instead — and we laugh along with him.

Still, it’s a weighty subject, and Naylor spends ample time unpacking the wartime horrors. He wrestles aloud with the challenge of telling a story that is not his, and of trying to reach a level of integrity that he sees even journalists abandoning in the face of such brutality.

For all his humor, Naylor is unapologetically truthful. Some of the photographs are hard to look at, and they strike a chord, with the Taliban now having held control of Kabul since August 2021. Naylor has brought his story up to date, and 20 years on it is as prescient as ever.

“Afghanistan Is Not Funny,” directed by Darren Lee Cole and Martha Lott, premiered at the 2022 Hollywood Fringe Festival and came to Soho Playhouse, at 15 Vandam St., as part of the Fringe Encore Series. The series brings in works from Fringe Festivals around the world for a chance to play Off Broadway in New York City.

The series will continue at Soho Playhouse through Sun., Jan. 8, with several more plays lined up. For more information about the series and tickets, visit fringeencoreseries.com/2022-encore-series.