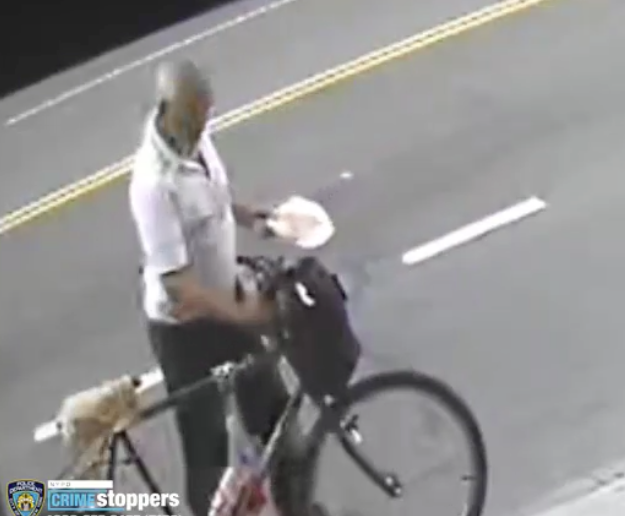 The alleged assailant heads off after the incident, pizza slice back in hand. (Courtesy N.Y.P.D.)

A pizza-packing perp gave an older man a slice of his mind, pushing him down on W. 14th St. Tuesday evening, knocking him unconscious.

Police said a 76-year-old was walking on the sidewalk around 7:30 p.m. outside 202 W. 14th St., near Seventh Ave., when he got into a verbal dispute with a stranger on a bicycle.

As seen in surveillance video provided by police, the cyclist got off his bike and approached the pedestrian — but not before first putting down on the curb a slice of pizza he was toting on a paper plate.

According to cops, the attacker then pushed the victim, causing him to fall backward on the sidewalk and hit his head. The victim temporarily lost consciousness and suffered head trauma.

The video does not show the actual assault. But it does show the attacker — without the ball cap he had worn earlier — returning to his bike, picking up his pizza slice and heading off.

The victim was transported by E.M.S. to Lenox Hill Hospital, where he was treated for a laceration to the back of his head and was reported in stable condition.

Police did not immediately provide more details on the nature of the men’s dispute.

Police ask anyone with information to contact the New York Police Department’s Crime Stoppers Hotline at 1-800-577-TIPS (8477) or for Spanish, 1-888-57-PISTA (74782). Tips can also be submitted on the Crime Stoppers Web site at WWW.NYPDCRIMESTOPPERS.COM or on Twitter at @NYPDTips.