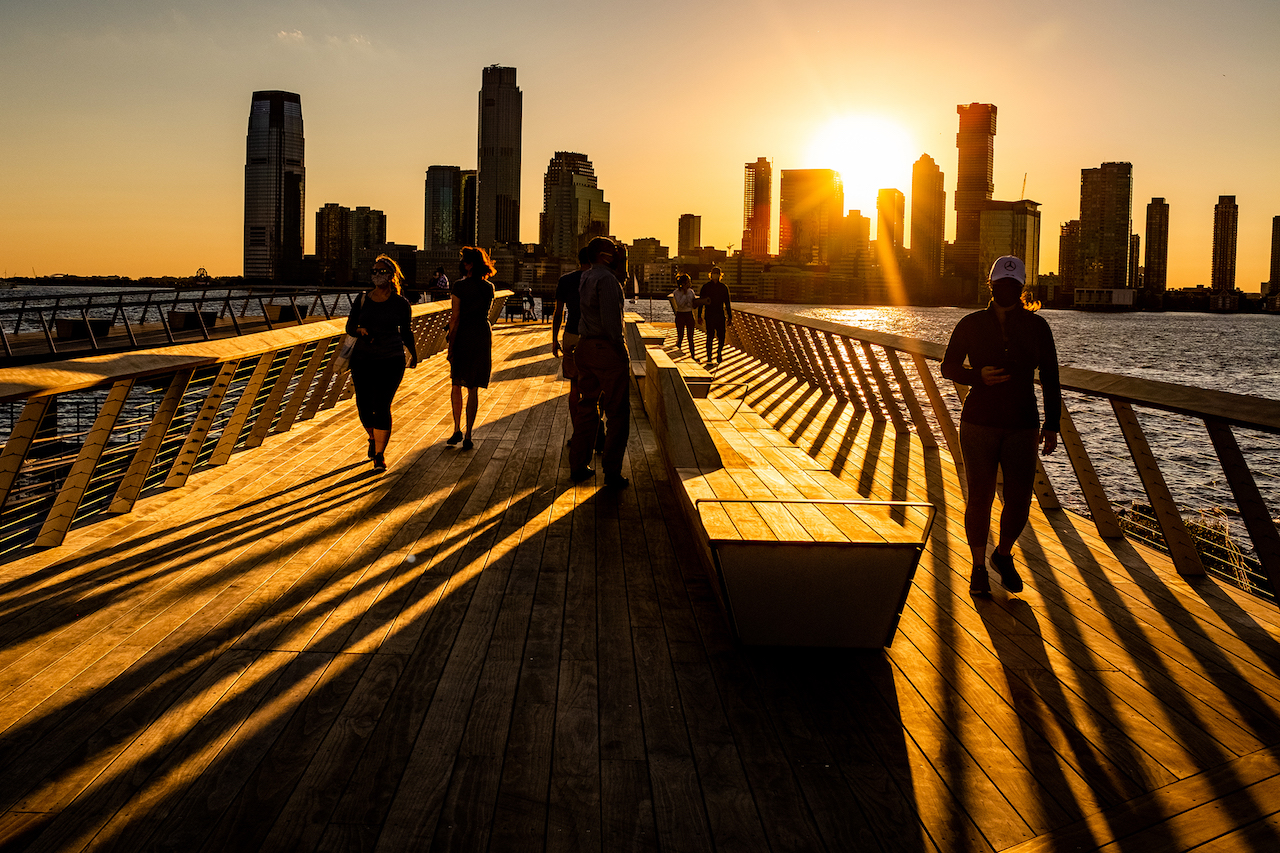 The newly opened Pier 26, photographed at sunset on its first day. (Photo by Milo Hess)

The Hudson River Park has opened its first new pier in a decade.

On Sept. 30, the newly landscaped Pier 26, in Tribeca, was opened to the public. It’s part of the four-mile-long Hudson River Park, which stretches from Chambers St. to W. 59th St.

Located between Hubert and N Moore Sts., Pier 26’s most unique feature is a tide deck — an engineered representation of a rocky tidal marsh — which will be used for educational and ecological programming.

Along with indigenous plantings representing varied coastal communities, the tide deck is intended to heighten awareness of the wildlife and habitat found within the park and the estuarine sanctuary included within its 550 acres. While the park contains an on-land portion and around a dozen repurposed piers, it is, in fact, mostly water, extending out to the pierhead line.

Other features on the new pier include a sunning lawn, a sports court for children’s play, and multiple lounge areas for enjoying river views. The construction of the $37.7 million pier was funded by Citi, the Lower Manhattan Development Corporation and New York City. Design funds for the tide deck were provided by New York State’s Environmental Protection Fund.

“The incredible transformation of Pier 26 into a world-class ecological, educational and recreational resource is a testament to the corporate, civic and community leadership behind this project and an example of the powerful role public-private partnerships can play to help improve quality of life for communities,” said Basil Seggos, the commissioner of the state Department of Environmental Conservation Commissioner and the new chairperson of the Hudson River Park Trust’s board of directors. “The millions of visitors drawn to Hudson River Park each year will enjoy the pier’s state-of-the-art amenities for generations to come, and with improved access countless children now have the opportunity to learn unforgettable lessons about the Hudson River.”

“The pandemic demonstrates the importance of access to outdoor space, and the completion of this beautiful new space expands that access,” said Vicki Been, deputy mayor for Housing and Economic Development. “Thanks to Citi, Hudson River Park Trust and the Lower Manhattan Development Corporation, Pier 26 transforms another section of Manhattan’s post-industrial waterfront into a beacon for well-being and health.”

“We are excited to celebrate the long-awaited opening of Pier 26, right in our own backyard,” said Michael Corbat, C.E.O. of Citi. “Adjacent to our global headquarters, the redesigned pier brings together education, ecology and community and is a much-needed resource where New Yorkers can gather responsibly.”

“Seven years in the making, we are proud to open this entirely unique pier at a time when Hudson River Park has taken on new importance for so many in the face of the current health crisis — providing a much-needed oasis in a city with limited green space,” said Madelyn Wils, president and C.E.O. of the Hudson River Park Trust, the park’s operating authority. “By designing a pier that brings New Yorkers closer to the city’s natural wildlife and habitat, we hope to offer critical hands-on learning opportunities for students, places to play and plenty of quiet spots for people to take in the nature around them.”

“The new Pier 26 is a welcome addition to the recreational and educational options available to Downtown residents and to all New Yorkers,” said Manhattan Borough President Gale Brewer. “It’s especially great to have it open in the midst of the pandemic when we’ve never needed outdoor options more. This is an important milestone that gets us one step closer to a 100% completed Hudson River Park.”

“This year has truly shown how much we should value public open spaces and parks as a respite from indoor activities and responsibilities,” said Assemblymember Deborah Glick.”I am so happy to see a new park-pier with active and passive recreation options for New Yorkers who come to Hudson River Park. The tide deck and ecological programming that will accompany it will bring interactive educational opportunities to our unique waterfront park. This is a bright spot for New York City.”

“The opening of Pier 26 — the first new park pier in 10 years — is a great achievement for the city and a huge benefit to families all up and down the West Side,” said Mike Novogratz, chairperson of Hudson River Park Friends. “For these neighborhoods, where green space is in short supply, the park is more important than ever. And during the pandemic, you can multiply that by a hundred. The design offers plenty to do for everyone. People can play sports on the new field, learn about the river’s ecology at the tide deck, or watch the sunset over the river from a lounge chair. I’m proud to welcome every New Yorker to Pier 26 and want to thank the Trust, Citi and our government partners for this terrific new addition to Hudson River Park, which I’m thrilled to support.”

Pier 26 was designed by the award-winning landscape architecture firm OLIN. The pier’s defining feature is its 15,000-square-foot tide deck — the first of its kind in New York City. The deck has been planted with native shrubs, trees and grasses intended to mimic the wetlands that once existed along the Hudson River shoreline and is part of a coastal area that regularly floods with the daily tidal cycle, giving plants and wildlife vital nourishment from the river.

An elevated cantilevered walkway above the tide deck provides spectacular city and river views, while the deck itself will be accessible for guided tours and educational experiences led by the park’s staff. The tide deck will help support the educational programming offered by the Trust’s environmental education and scientific programming arm, the River Project, for more than 30,000 kids and adults every year.

In addition, Pier 26’s upland is already home to the popular City Vineyard restaurant and wine bar, and the Downtown Boathouse, which has provided free kayaking for half a million people since its inception. These features, along with the pier infrastructure, were completed in 2013 as part of a previous construction phase with funding from L.M.D.C. and New York City, while the balance of the pier awaited additional funding.

In the future, the upland area immediately east of Pier 26 will also include a specialized science-themed playground of more than 4,000 square feet, designed by OLIN and with play features by the Danish playground design firm Monstrum, which helped design Hudson River Park’s pipefish playground in Chelsea Waterside Park. The play area will include larger-than-life play features in the forms of native and endangered sturgeon species found in the Hudson River. The playground will join the Trust’s planned estuarium on the adjacent upland to complete the Tribeca section of Hudson River Park. The estuarium — a research and education center featuring live Hudson River fish to be run by the Trust’s River Project and focused on river ecology — is still in its fundraising stage.

The opening of Pier 26 comes as the Trust spearheads roughly $1 billion in public/private partnerships in ongoing construction toward completion of the four-mile-long park. Construction is nearing completion on Little Island, off of W. 14th St., the planned public park pier and performance space once known as Pier55, which is expected to open next summer. That project was made possible through funding from the Diller-Von Furstenberg Family Foundation — representing the largest single donation to a park in the history of New York State — along with funding from New York City.

Work is also ongoing at Pier 57, at W. 16th St., a mixed-use development by RXR Realty/Youngwoo and anchored by Google office space, which will include more than three acres of public open space, including a rooftop park and perimeter esplanade, which is also expected to open next year.

At the same time, the Trust plans to break ground by next spring on three additional public park projects: Gansevoort Peninsula, west of the Meatpacking District, which will provide direct waterfront access for the public with a resilient beachfront and with the largest single green space in Hudson River Park; Pier 97, at W. 57th St., which will include a lawn, playground, sunset plaza and youth soccer fields, along with an esplanade connection to Riverside Park South; and a reconfiguration of Chelsea Waterside Park, at W. 23rd St.

Finally, the Whitney Museum of American Art is building “Day’s End,” by artist David Hammons, on the southern edge of Gansevoort Peninsula in partnership with the Trust, which will be one of the country’s largest public art projects upon completion late this year.

The opening of Pier 26 marks an important post-9/11 rebuilding milestone for Lower Manhattan. In 2010, the Lower Manhattan Development Corporation funded construction of Piers 25 and 26 as part of its ongoing rebuilding efforts in the neighborhood. The adjacent Pier 25 is the most heavily used pier in Hudson River Park.