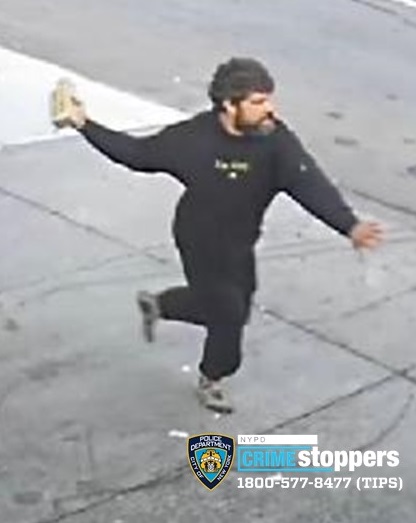 The fight ended when the attacker, above, hurled a brick into the victim's face, police said. (Courtesy N.Y.P.D.)

BY THE VILLAGE SUN |  Police are seeking the public’s help in finding a man who attacked a patron at a popular pickle store on the Lower East Side.

According to police, the latter man was hanging around the establishment but not patronizing it. Somehow, like a pickle, things turned sour between the two males.

At any rate, according to a surveillance video tape, things escalated when the younger man raised a metal chair over his head and menaced the other guy with it. He put the chair down and momentarily pretended to relax, but then sucker-punched the victim with a right hook to the side of the head.

The older man answered with a left jab straight to the face of the attacker, who then grappled with him and slammed him onto the sidewalk. A Pickle Guys employee broke up the scuffle at that point, pushing the attacker off the victim.

But police said the incident then “continued behind the location” for another round.

The unidentified attacker then again came out onto the sidewalk in front and approached the victim, who had by now picked up a stick that he was waving around in self-defense as the two circled each other.

The younger man grabbed a brick and, lunging at the victim, heaved it into his face, before sauntering off.

The victim, who suffered a cut to his nose and bruising to his wrist, was transported in stable condition by E.M.S. to New York Downtown Hospital.

The suspect wore a black hooded sweatshirt, black sweatpants and black sandals and had dark hair and a dark beard. By the time he fled, though, he was only wearing socks, having apparently lost his sandals in the scuffle. Meanwhile, the other guy started out wearing black sandals but had for some reason switched to black sneakers by the time of the final round.