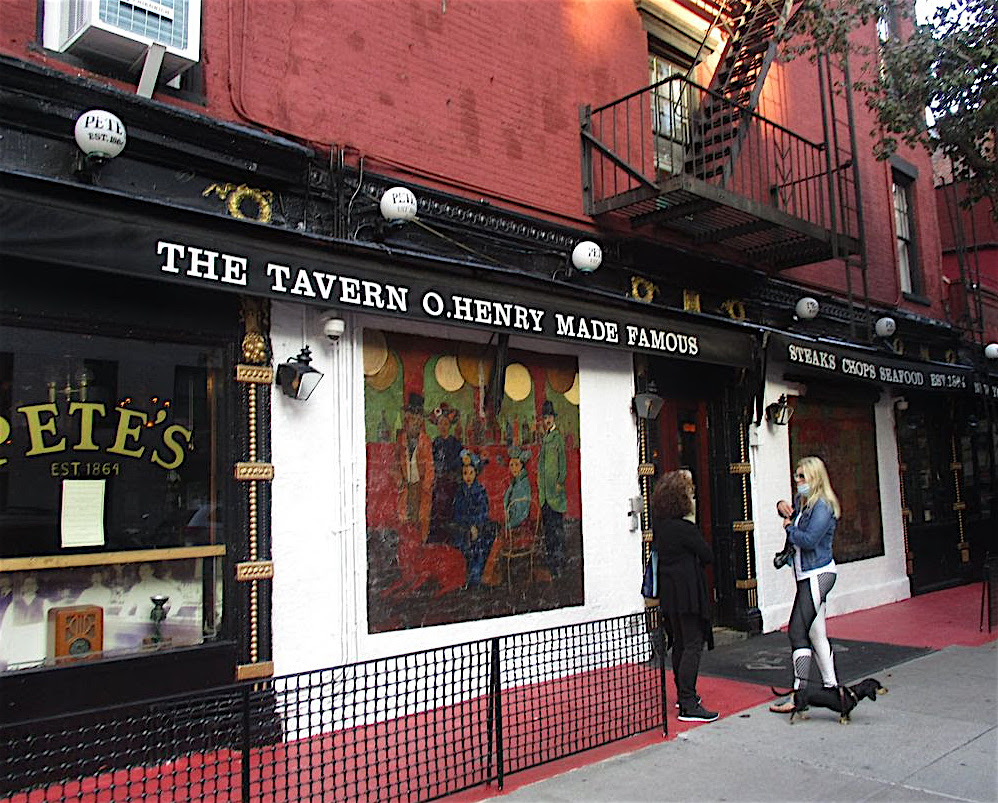 Pete's Tavern, at 18th St. and Irving Place, has been closed since March. (Photo by Mary Reinholz)

BY MARY REINHOLZ | The tables inside are set with black folded napkins while the glow from amber lights above the bar make this old ale house look warm and inviting. Outside, on the corner of Irving Place and E. 18th St., lanterns hang below awnings with boldly lettered signage contending that Pete’s Tavern in Gramercy has been operating since 1864, touting it (arguably) as “New York oldest original bar,” and “the tavern O. Henry made famous.”

A poem, giving the iconic Pete’s a female persona, states, in part, on its doors, “We will make her old woods gleam and her tables shine / She will again serve good food and wine.”

What these words don’t say is that the antique venue — a spot that survived Prohibition by disguising itself as a flower shop — has been closed for renovations since March when the coronavirus pandemic hit, causing the death of one of its staff and infecting three other employees.

The pub, in a building that was once a hotel, then a grocery store-turned-cafe, doesn’t even offer takeout. In recent decades, the bar has drawn celebs starring in TV series like “Seinfeld,” “Sex and the City” and “Law & Order.”

“It was then and there [after the COVID death] that we decided we would not reopen and further jeopardize the precious lives and health of our employees,” stated a notice posted on the entrance of Pete’s last month (and then abruptly taken down). The note added that Pete’s Tavern instead began a regimen of “scrubbing, cleaning, disinfecting every inch of the restaurant. We are training all of our team so they can adhere to all of the new hygiene rules and protocols in this new world we live in. We will open as soon as we feel it’s safe for both our team and our customers.”

This detailed announcement disappeared shortly after The Village Sun repeatedly requested information via e-mail and phone calls to Pete’s longtime manager, Gary Egan. When Egan called back late on a Friday afternoon, he claimed he could not provide a timetable for when the cleanup and repairs at Pete’s would be completed. An associate who had previously answered his phone said the “air-conditioning system needed fixing,” and that this was difficult “because it’s such an old building.” The associate gave a tentative reopening date of Nov. 15.

Egan declined to identify the worker at Pete’s who had died from the virus.

“That wouldn’t be fair to him or to his family,” he said. Egan also wouldn’t identify the current owner of Pete’s Tavern.

The corporate entity behind Pete’s Tavern is Dmf Gramercy Enterprises, Inc. Dun & Bradstreet states this entity’s president is Loretta Friedman and, like other sites, provides a Long Island address that can be traced to the Friedman family. The company’s late vice president was Bruce Friedman. The Dun & Bradstreet entry lists 32 employees for Dmf Gramercy’s locations.

Another Web site, however, reports that Regina Friedman is C.E.O. of Dmf Gramercy Enterprises and gives its address at Pete’s Tavern, at 129 Irving Place.

A manager at a nearby restaurant, Friend of a Farmer, at 77 Irving Place, which appears to have a bustling sidewalk dining business, speculated there might be a problem with Pete’s outdoor cafe license, which he said could be up for renewal.

The sidewalk cafe is the source of 40 percent of Pete’s revenue, according to court documents. It was the subject of a two-year successful legal battle begun in 2012 by Dmf Gramercy Enterprises against Pete’s Tavern’s landlord, Lillian Troy 1999 Trust; the landlord had denied consent for Pete’s to operate the patio cafe, even though it had apparently done so since 1938.

Melissa Barosy, press secretary for the city’s Department of Consumer Affairs, which was named in the aforementioned lawsuit, noted that all sidewalk cafe regulations have been suspended for the duration of the City’s Open Steets: Restaurants program.

In an e-mail, Barosy explained that because of the pandemic, license expiration dates and renewal deadlines have been extended.

She said that once the city issues a new mayoral emergency executive order with guidance for renewing licenses, extended licenses will expire 45 days from the date of the mayoral E.E.O.

Meanwhile, traveling bands have been serenading outdoor diners at cafes, restaurants and watering holes on Irving Place and Gramercy side streets, with some of the diners applauding the musicians as they sit under tents glittering with lights and festooned with plants and flowers.

“I’ve been on Broadway but now this is the only option” for work, said a member of one brass band after it played for about 40 outdoor diners on a recent Saturday night at the new Salmagundi Cafe. A Korean restaurant, it opened Sept. 2 at 51 Irving Place, at  E. 17th St. near Union Square.

A waiter said the band had made impromptu visits before to the eatery and others in the neighborhood “and everybody loved them. It’s been awesome.”

Pete’s Tavern still has visitors, people passing by who sometimes stop to peer into the windows of the legendary pub on the first floor of a five-story building. Some stand in Pete’s vacant outdoor cafe checking out an open door for construction workers. A tall blonde woman in an exercise suit asked this reporter when Pete’s was expected to reopen. I asked people across the street at the Bedford Cheese Shop, at 67 Irving Place, if they had heard anything.

“I heard they’d open sometime in November,” someone there said.

Although Bedford Cheese is not a restaurant, it has seven tables available for outdoor use by patrons asking for cheese boards, coffee and sandwiches, said its educational director Zoey Sachs. She noted that the shop reopened in June after joining the lockdown and then participated in the city’s Open Restaurants program, which she calls a “blessing in disguise.”

“We do breakfast and lunch and people can sit outside to eat lunch or work on their laptops,” she said. “We could have stayed open” when the pandemic first hit, “but we wanted safety,” she said. “We cleaned the store from top to bottom and had to cancel [cheesemaking] classes. We have adjusted to the COVID age.”

As for Pete’s Tavern, Sachs said she had no explanation for its staying dark for so long.

“We have respect for their privacy,” she said. “One of their co-workers passed and they’re probably trying to figure out how to reopen safely.”

Christina Earle, one of  three female co-owners at Bedford Cheese, said her shop had regained “more than 25 percent” of its lost income due to the pandemic and attributed much of that to “strong support from the local community” and from restaurants on the block.

“We’ve all become friends,” she said. “We all help each other.”