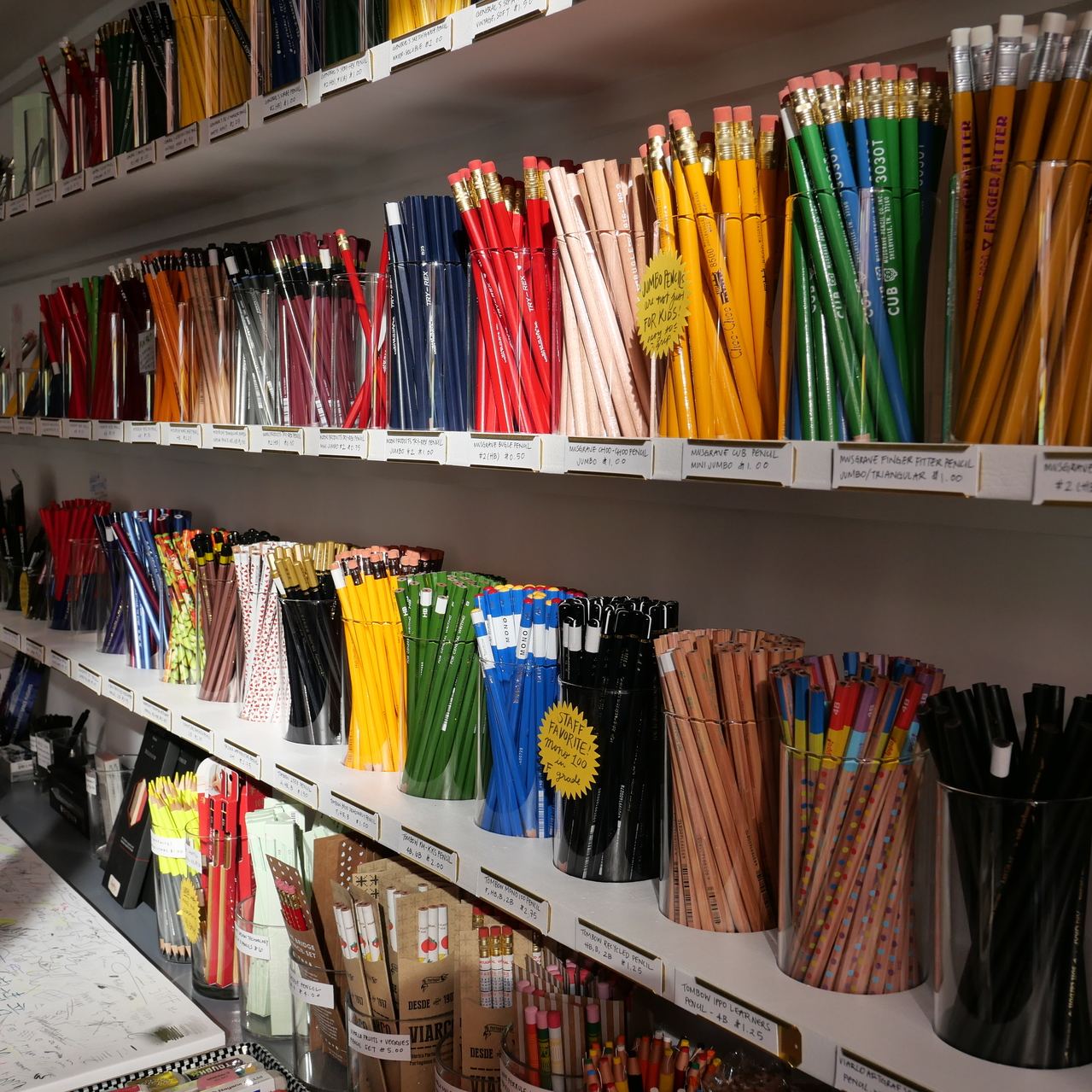 A pencil lover's paradise: CW Pencil Enterprise had it all, from Mitsubishi and Blackwing to Shahson, Musgrave and Viking. (Instagram)

Pencil shop had the write stuff until erased by pandemic

BY MORMEI ZANKE | CW Pencil Enterprise’s farewell weekend was a melancholy affair. When I arrived at 15 Orchard St. on the second to last Sunday of last October, there were already about a dozen people in the shop, clutching red plastic baskets and filling them to the brim with pencils and stationery.

This was their last chance to do so and there was a palpable sense of urgency mixed with grief. No one wanted their favorite speciality shop to close, especially not one with such superb pencils.

A woman named Mavis told me she was a composer who got her first CW Pencil years ago, and found that it perfectly suited her writing needs, so she had been coming back ever since.

A high school junior named John was also in the store stocking up on final items. He said he often came here when he felt down to cheer himself up.

“They have all the pencils I’ve ever wanted,” he said. “It’s like a little mystery sometimes.”

This was, admittedly, the first time I’d been to CW’s, and I was in awe of the rows and rows of glass cylindrical vases that lined the walls, all filled with pencils stocked like flower bouquets. I did what everyone else was doing — grabbed a red basket by the door and began to scour the shop for the magic I wanted to bring home, for the last time.

Two weeks later, I met CW herself, Caroline Weaver, founder of the pencil emporium. We sat in the now-half-empty shop with the lights off, at the checkout counter on pastel blue high-bar stools. Sunlight spilled into the store from the front window that still read: “CW Pencil Enterprise, Purveyors of Superior Graphite, Etc.”

Weaver was making Advent calendars, an annual tradition she was determined to make happen despite the chaos of closing and moving out of her shop that had had a long, seven-year life. Her dark brown hair was tied up in a bun with a fabric scrunchy, and she wor a gray wool sweater. She fidgeted with her gold hoop earrings. I noticed her nails were painted bright red and she had a tattoo of a skinny pencil on her forearm.

Weaver is 30 now, but she was 23 when she first opened CW Pencil Enterprise in 2014. She began online first, then continued operations in 2015 at her first brick-and-mortar shop on Forsyth Street. She later moved to Orchard Street in 2017 due to a mold problem.

Weaver invested her own money into the business initially and was lucky at the time that the Forsyth space’s rent was only $1,900 — plus she received the first three months free. The inventory costs were low, and she initially was the only employee. All these factors, combined with an elegant business idea, allowed the shop to flourish.

Weaver grew up in Marietta, a small town in western Ohio that sits along the Ohio River. After high school she moved abroad to study art practice at Goldsmiths, University of London, then returned to New York where she worked in retail until she opened CWPE.

She told me she has always been fascinated with the role of a shopkeeper — the ability to build community around a public space. But why pencils?

“It was just my made-up fantasy shop,” she said. “I’m just generally interested in everyday objects as sort of, like, marvels of design and function. And I think that those are often things that most people don’t appreciate or pay enough attention to because they’re things that we’re just used to. When, in reality, the modern pencil took centuries to arrive at. I thought it would be cool if there was a place where people could come and experience a world tour of pencils.”

At CWPE, you could find pencils of varying hardness, darkness, smoothness, size, grip and age. At one point, the store sold vintage pencils from the 1930s through 1980s. Weaver kept the store stocked with products from America, Europe, Japan, Pakistan and India. There were well-known staples like Mitsubishi and Blackwing, balanced with more niche offerings from Shahson, Musgrave or Viking, to name a few.

Asked if she had a favorite, she admitted, “I do really love a good firm, but dark Japanese pencil.”

But really, she said, she doesn’t have any favorites. She keeps a little tray on her dining table with several pencils that she uses in rotation. Choosing a writing tool, she said, is akin to getting dressed in the morning.

Weaver said that the past seven years had been a whirlwind. She never expected her business to have grown the way it did. The community fully embraced her gusto for pencils, apparently just as obsessed with them as she was. The popularity was both gratifying and scary, she said.

Weaver had to come up with new ways to satisfy her customer base and keep people interested. Over the years she started selling more than just pencils — adding notebooks, envelopes, stickers, erasers, desk supplies and more — creating monthly subscription boxes and collaborating with various artists and writers.

“This business in many ways, this closing, doesn’t really feel like a failure,” Weaver told me. “To me, it feels like a celebration of a really crazy thing that got to exist for seven years. It’s kind of a miracle.”

Unfortunately for all pencil lovers of the Lower East Side, the pandemic upended the cosmic balance that had allowed this charming enterprise to survive. The past 18 months had been exhausting, Weaver confided. It got to a point where she was no longer willing to make compromises in order for the business to stay afloat.

Weaver firmly believes in paying her employees a living wage, providing healthcare benefits and only charging her customers manufacturers’ suggested retail prices. The pandemic made this difficult, but she held on for as long as she could.

“There’s so many decisions that I’ve made that have not been financially smart decisions but have felt right to me,” she said.

I told Weaver that I had been at the shop on closing weekend and could tell how much it was loved by so many people. Weaver said she’s grateful and found the experience of running a small business that lives symbiotically within the neighborhood to be a beautiful thing.

“We announced that we were closing and I didn’t look at my phone for three days,” she said. “And then I came back to work. I was just like a bundle of nerves, so scared to tell the public that this was happening. And I went to the back of the shop and sat at my desk and decided to rip off the Band-Aid and read all the Instagram comments. I was shocked. I read over a thousand comments, not a single one was even remotely negative and I just sat there and sobbed.”

Weaver insisted that the shop wasn’t just a one-woman effort. What moves her most is that CWPE was run by a team of dedicated people who really cared about the shop and community.

Besides the inevitable grief that comes with closing a beloved business, Weaver seems to have come to peace with the closure.

“There’s a lot of shame around closing a business because the assumption is that the business is closing because it has failed,” she admitted. “And, in some respects, that will always be the case with a closure. But I personally really, really believe that maybe not all businesses are meant to last forever. They’re not structured in a way that they can last forever.”

Weaver opened CWPE when she was in her early 20s, and in some ways for the young entrepreneur, that feels like a lifetime ago. What’s next for her? She plans on being a consultant for other small businesses to help them figure out how to thrive in their neighborhoods. I have a feeling she’ll be good at that.

“I think nobody should do the same job for their entire lives,” she declared. “What kind of boring life is that?”