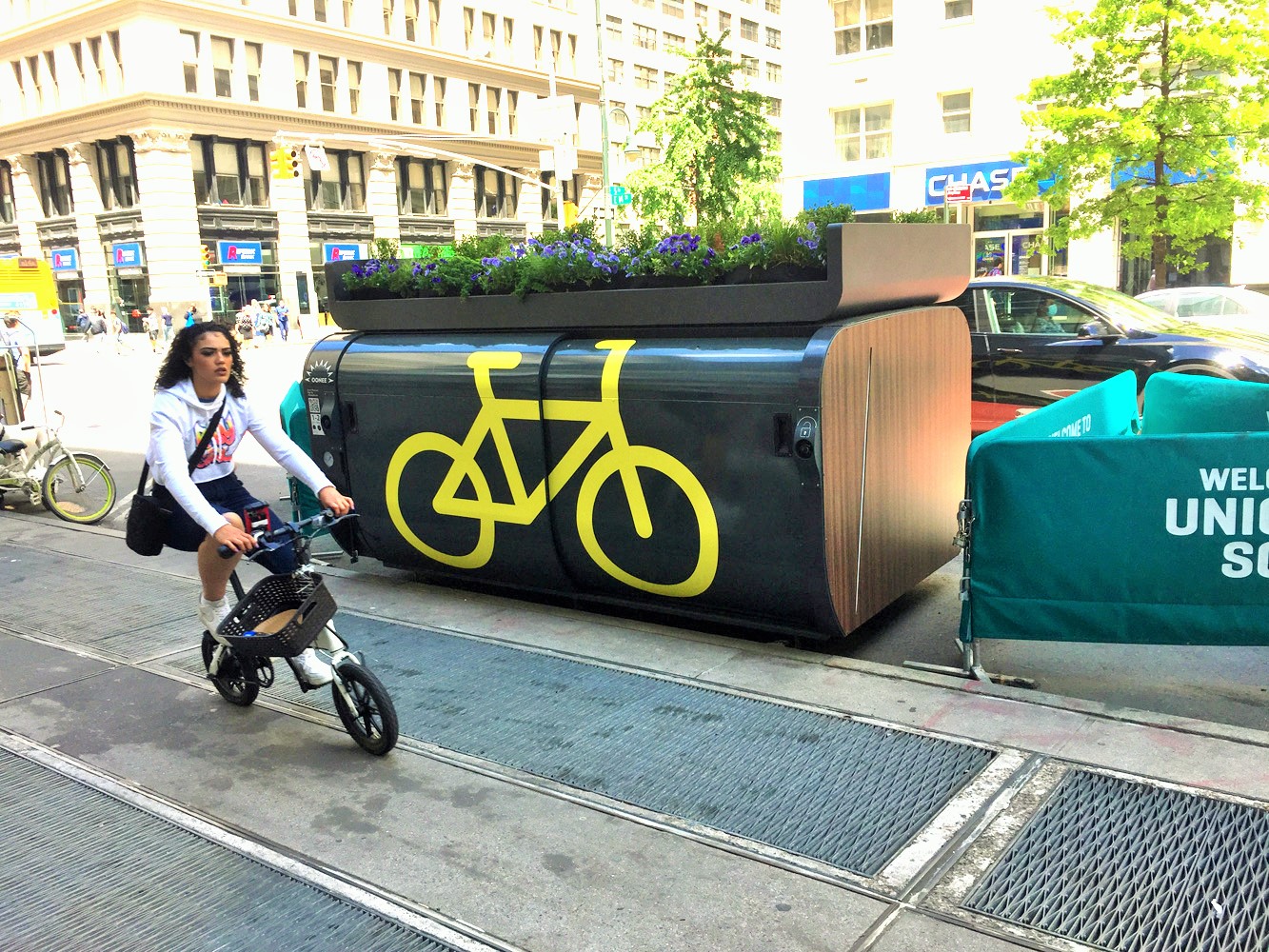 The Oonee Mini is located just west of Union Square this month during its pilot-project tour. (Photo by © Jefferson Siegel)

BY THE VILLAGE SUN | Pod people were the bad guys in the classic 1950s sci-fi flick “Invasion of the Body Snatchers.”

But the pod popping up around Downtown today is meant to keep people from snatching not bodies but bikes, plus other forms of so-called “micromobility.”

Oonee, the company behind the Oonee Mini, above, describes the structure as “A smart, modular, customizable pod that provides secure parking for scooters and bicycles as well as public space amenities.

“Just like the sea urchin from which its name derives, Oonee is equipped with safety features to protect its valuable interior cargo, and comes in different colors and sizes to adapt to varied environments,” the company notes.

This six-bike “corral” — which even sports a green roof — is actually a prototype currently on tour as part of a pilot project, during which it’s free to use.

The unit started out in March on W. 14th Street in the Meatpacking District and will move to a different location each month. In April it was at Broome and Essex Streets on the Lower East Side. This month it’s back on 14th Street at Fifth Avenue near Union Square. In June the pedalers’ pod will move to Prospect Heights, Brooklyn, and in July it will pop up in Astoria, Queens.

In the future, people could pay a monthly fee to use the pods.

“Speaking on behalf of the entire Oonee team, we are excited and humbled to work with the Department of Transportation and…incredible community-based groups to introduce this much-needed cycling infrastructure to our streets,” said Shabazz Stuart, Oonee’s founder and C.E.O.

“Bike theft is an enormous inhibitor to getting more people riding around the city, and Oonee’s secure, easy-to-use parking facilities will let New Yorkers rest easy that their bikes are safely stored,” he said. “We’re grateful to D.O.T. Commissioner Ydanis Rodriguez and his team for their willingness to embrace new solutions — and to Oonee, a New York City-based startup, for bringing safe, secure bike parking to their hometown.”

Although named after uni, a Japanese delicacy, there are apparently currently no plans to serve sushi in the pod. But with Open Restaurants, which is currently under the control of D.O.T. — who knows?

Seriously, though, with bike thieves using grinders to cut through Kryptonite locks like butter, these parking units sound like they might be a good idea, particularly for people with pricey rides.