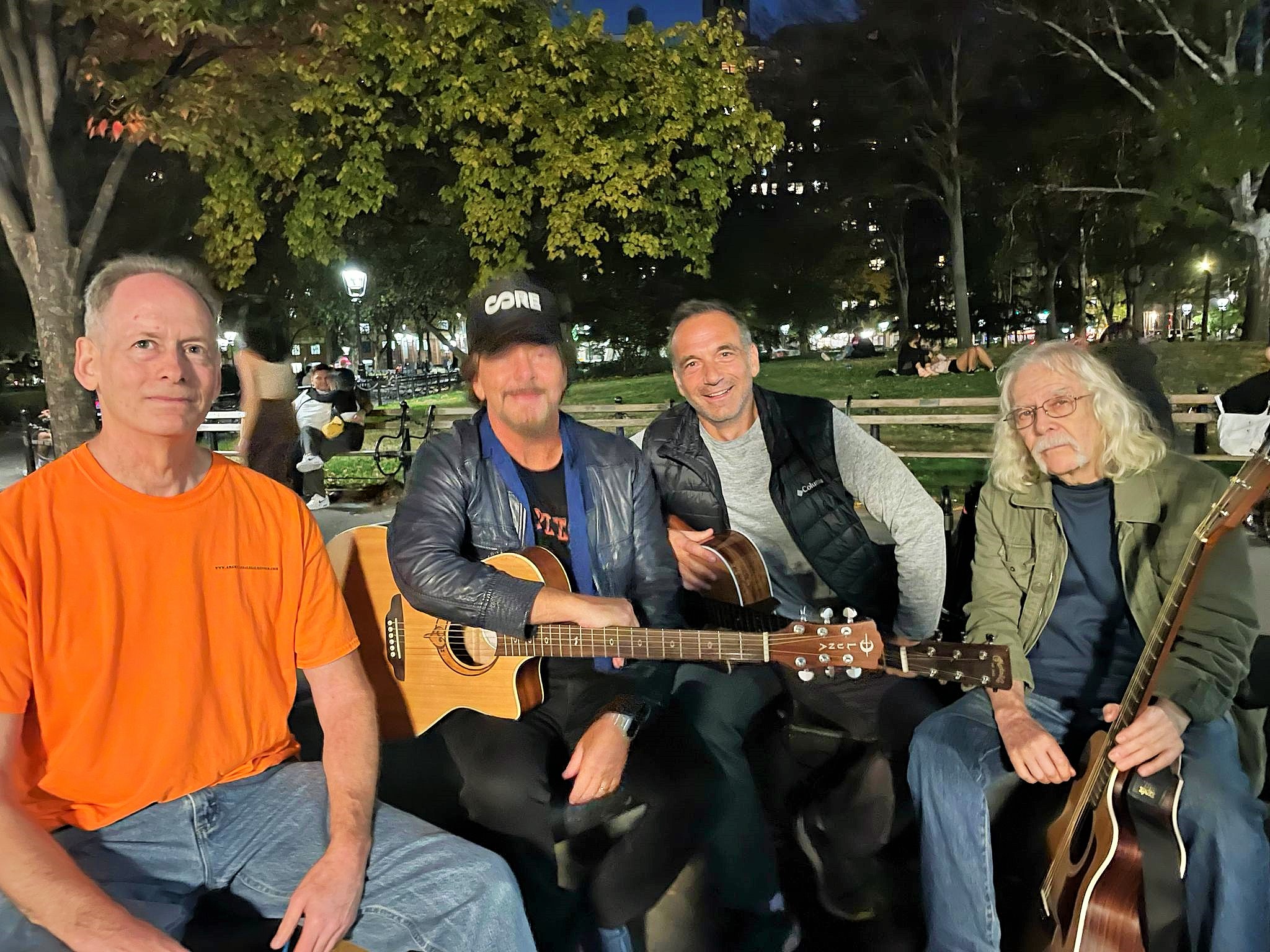 BY THE VILLAGE SUN | No one could have predicted this… .

“Dance of the Clairvoyants” singer Eddie Vedder of Pearl Jam recently swung by Washington Square Park and wound up rocking out with the place’s regular crew of guitar players.

It happened two Sundays ago on Nov. 6 around 7 p.m. Bill Warren a.k.a. Abe Lincoln (he sometimes dons a beard and top hat á la the president) tipped the newspaper off. He said he got there toward the end of things but heard the whole story.

Basically, Vedder and his wife strolled by and saw some of the usual veteran “park jammers,” as they call themselves — René Logeais, Doc Will and Big Mike — playing Neil Young songs.

At first, the Pearl Jam front man just hung back and dug the tunes.

But the “Even Flow” belter eventually borrowed a guitar and flowed right into one of his signature songs, “Better Man,” with them.

Although video was naturally taken, the Washington Square jammers promised that none would be posted.

Logeais told The Village Sun how it all went down.

“Well, we had just been playing “The Needle and the Damage Done” and this couple stood there listening to us,” he related. “Then we played “Helpless,” which Mike was singing. Vedder started to sing along, and when the song was over, Mike asked where they were from. Vedder said Seattle, to which Mike replied, ‘I hear there are good musicians in Seattle,’ and that’s when Vedder introduced himself.

“Will and I started hearing the words ‘Eddie Vedder’ floating around, not quite realizing what was going on. I said, ‘Really?’ and his wife said, ‘Yes.’ Mike handed him his guitar and Vedder played “Better Man.” Will knew the song and played along with him.”

Logeais said, all told, Vedder stuck around for about half an hour.

“The first 15 minutes he was listening to us — meaning we must have been playing nice enough for him to stop by and linger,” he said. “He played one song, a shortened version of “Better Man,” and that was it.

“Vedder told us we could record him but not post the video,” Logeais added. “He’s blurry [in the photo] because his wife is not exactly a professional photographer. We have another picture where he is looking down, so instead of his face, we see his hat. I assume his wife snapped the picture just as he was straightening up, but with the low light in the park, the phone had no chance to compensate for that.”

Another one of the park jammers, Archie, happened to be working his usual gig that evening at the Music Inn store, on W. Fourth Street, so was bummed out to have missed the big occasion.

“Unfortunately, I wasn’t there for it, arrrggg!!!!” he texted The Village Sun.