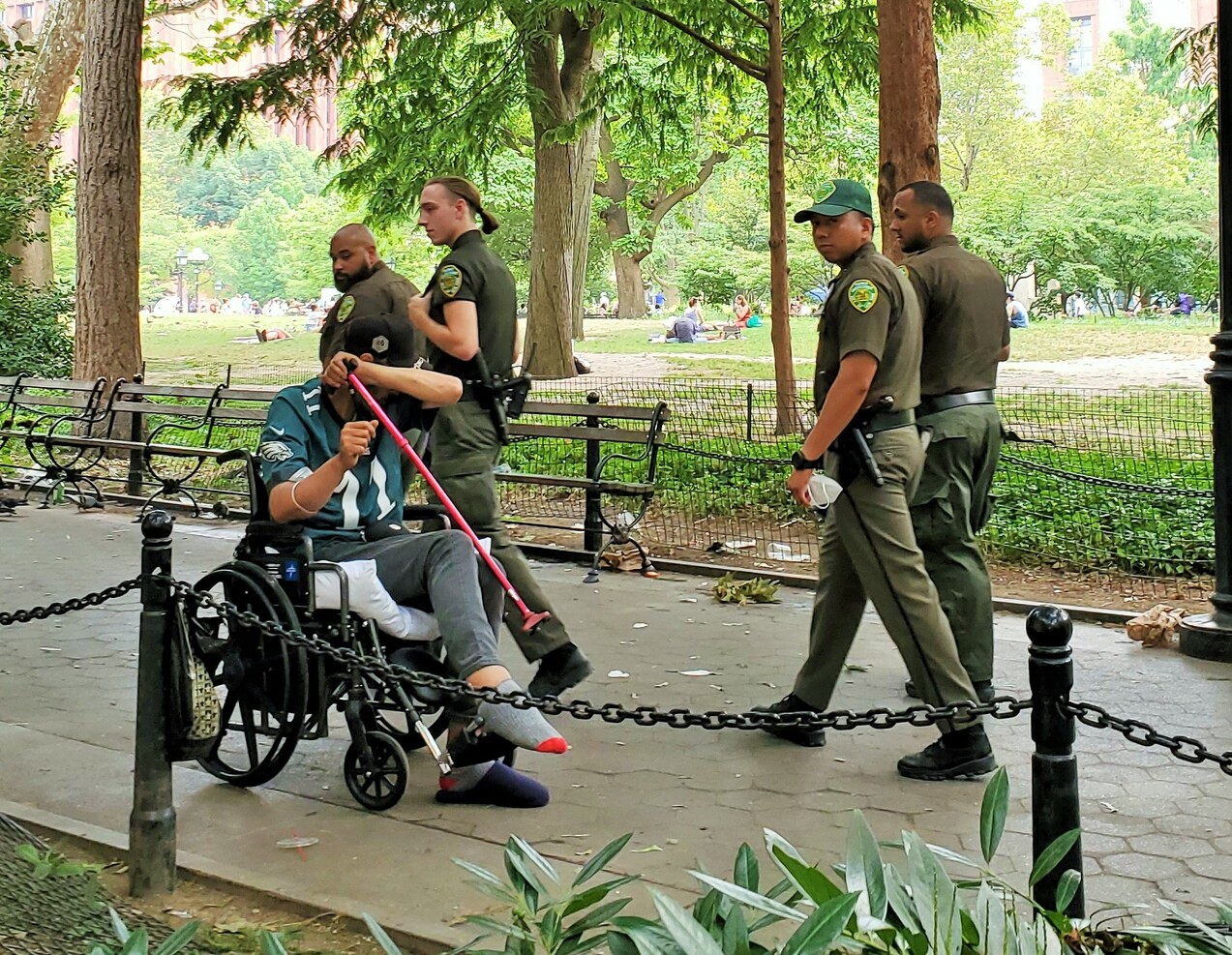 BY LINCOLN ANDERSON | There are more PEP officers and fewer vendors tables in Washington Square Park after a violent incident two Fridays ago that saw three young men beat and stomp a park supervisor in a dispute over a table.

The Daily News had a brief report on the assault later the same day it happened, saying, “Three men beat up a Washington Square Park supervisor on Friday after confronting him for removing a picnic table from the park’s famed water fountain.”

This past Sunday afternoon, a Parks Enforcement Patrol officer standing posted on the side of the pathway near the park’s bathrooms, said he and another officer there with him usually work in the Bronx but had both been assigned to the landmark Greenwich Village park for the day. Asked if he had heard about the supervisor being beaten up, he promptly answered, “That’s why we’re here.”

“They said, ‘Yeah, somebody got jumped, three guys’ — and that’s it,” he said. “I heard about it this morning for the first time. I don’t know what day it happened, what time or to who. They said that’s what happened, that’s why we’re here.”

He said it was Washington Square Park staff who had filled them in about the incident.

“I’m not even sure I should be talking to you,” the PEP officer told The Village Sun. However, he said, he didn’t have a problem with the newspaper stating the name on his badge, “I. ARIAS.”

“It’s my first time ever in this park,” he shared.

Asked how things were going so far on Sunday around 1:40 p.m., he shrugged, “Pretty smooth, honestly.”

Nearby along the path a strung-out-looking guy hanging onto a slice of pizza repeatedly woozily approached a water fountain, though without ever actually succeeding in pushing the button.

“I prefer it here,” the PEP officer reflected, contrasting it to his usual beat patrolling parks all over the Bronx. Asked why, he said, “The people…calmer people here, nicer people.”

Things weren’t calm and nice, however, on Fri., July 8, just before 5 p.m., when, according to police, the young trio attacked a park staffer. A Police Department spokesperson said, a Parks employee — identified in the report as a “supervisor” — was “moving a table that was thrown inside a park fountain, when he was approached by three individuals.”

There was “a heated quarrel over the table,” he said. “After an exchange of words,” one of the men punched the Parks employee in the face and another punched him the head, knocking him to the ground. Other information the spokesperson was able to pull together on the incident said the supervisor was walking with the table when all three individuals ran around him and hit him in the face multiple times, and then, after he fell down, kicked and stomped him.

The park supervisor suffered a broken nose and a cut eyebrow and was taken for treatment to Beth Israel Hospital, the spokesperson said.

The three suspects are still at large.

It wasn’t clear why the table had been thrown into the fountain or who threw it there — if it might have been other vendors competing for space, for example.

Vending, for the most part, is illegal in the park.

The Bronx PEP referred The Village Sun to a PEP officer whose usual beat is Washington Square Park for more information, but the latter said they have been told not to discuss the incident. However, she said, it probably would come up at the monthly Sixth Precinct Community Council meeting on Thurs., July 28.

Captain Stephen Spataro, the Sixth Precinct’s commanding officer, and a Parks Department spokesperson did not respond to requests for comment.

Another vendor said that the day after the supervisor’s broad-daylight beating, a PEP officer swooped in and abruptly berated him and several other nearby vendors to pack up and get out.

The vendor, for his safety, asked that he remain anonymous in this article and only be identifed as a non-marijuana vendor.

“I think I reaped the consequences of that,” he said, referring to the attack on the park worker. “Last Saturday a [Parks] cop, with no warning, came up and told us to get the hell out of here.”

The vendor said he knows that, in his own case, he has a right to sell his products in the park, but that, given the officer’s intensity, he just decided to follow the order and leave for the day that time.

In fact, he’s more concerned about the sometimes fierce competition for spots around the park fountain that, he said, in one case, turned scary for him. Basically, he said, about a month ago “a pot dealer” angling for the same spot as him threatened him with violence. Again, for his safety, the man didn’t want the exact details of what happened reported.

The vendor said when he related the incident to a PEP officer, “I was told, there’s more of them than me,” meaning more cannabis vendors. “I was just flabbergasted. So I told him, ‘So now we’re doing street rules?'”

The signal he was sent by the PEP officer was clear, he said: “At this point, I’m on my own.”

However, the assault on the park supervisor clearly has sparked the Parks Department to beef up its PEP presence in the park. This past Sunday, at least two crews of PEP officers — with four officers per unit — were patrolling in tight knots throughout the park. They walked up and down the pathways — even through the park’s drug-drenched northwest corner. They circled the fountain walking four abreast. They weren’t just standing around.

On this day, there were fewer vendors tables than in the past ringing the fountain and no clothes racks. And unlike Friday night two days earlier, when skateboarders had dominated the area from the fountain to the arch, doing flying tricks off the benches, noticeably no one was shredding.