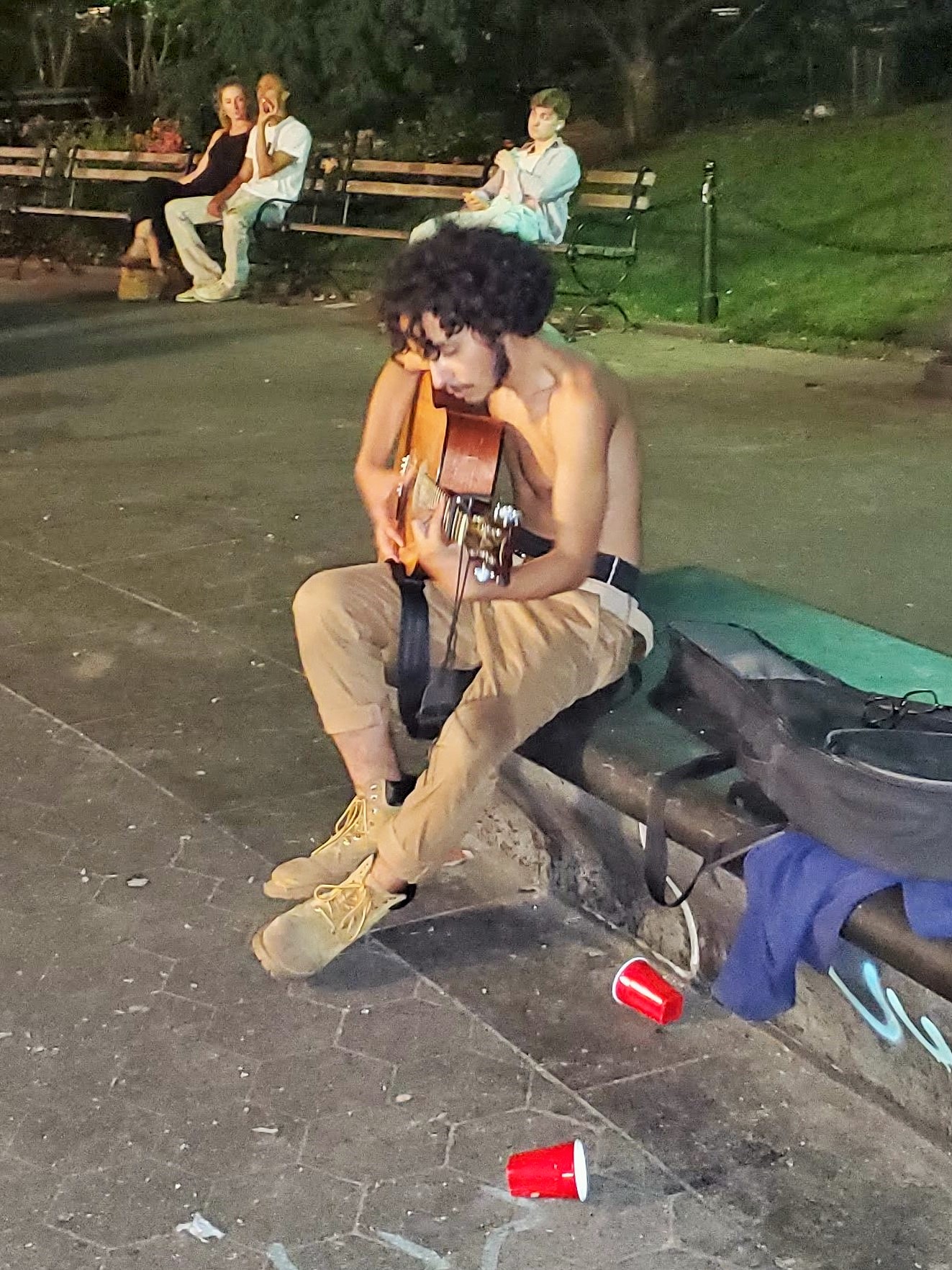 It was so quiet, you could play an acoustic guitar in the park. (Photo by The Village Sun)

BY LINCOLN ANDERSON | Updated June 29, 1:30 p.m.: The curious saga of the Washington Square Park curfew dragged on for another night Monday as police, once again, did not shut the park down at midnight.

The park was a mellow, not crowded scene as the clock struck 12 a.m. Yet the space remained open and police showed no signs of kicking everyone out.

Up until an hour before, though, police had indicated that they would be enforcing the curfew. Green-uniformed Parks Enforcement Patrol officers, who are Parks Department employees, had earlier told anyone with an amplifier to stop using it.

And so, for once there was no amplified sound in the park. There weren’t any drum sets being pounded. You could hear the sprinkling of the fountain and people talking.

The highway-style electric sign on the square’s north side had been turned back on, and was flashing, “PARK CLOSES AT 12:00 AM.”

Shortly after 11 p.m., police stood in bunches ringing the fountain plaza, as well as under the arch, maybe 40 officers or more in all. They were mainly chatting among themselves. They did not wear helmets and did not have batons.

Young parkgoers entering the fountain plaza were startled at the heavy police presence.

“They’re at every…” a man said, not completing the sentence, as the cops stood posted near each entrance to the plaza.

However, to hear several officers later tell it, Mayor de Blasio, at the last minute, made the call not to enforce the curfew and to allow the park to stay open once again.

Yet, the Sixth Precinct earlier in the day had issued a flier saying that the park would be closing at midnight. According to the Greenwich Village precinct, at least, the plan is to enforce the curfew every night going forward.

Right before midnight, The Village Sun asked two female police officers from the Midtown South precinct who were posted south of the fountain, near the LaGuardia Place entrance, if the park would be closing.

“I guess not,” one of them shrugged.

So who was calling the shots, they were asked? Who did not want the park closed?

“The mayor,” they answered in unison.

Another officer, from Patrol Borough Manhattan South, also said that the orders came from the Mayor’s Office. She felt the night had been a success, though, noting with a smile, “We stopped the loud music.”

On the other side of the square, Lieutenant Piezana from the Sixth Precinct was overseeing the whole operation. Around 12:15 a.m., he stood leaning on one of the metal gates ringing the Washington Square Arch. Asked if they would be clearing the park, he said no.

“We’re not closing it,” he said. “There’s nothing going on. There’s no reason to close it.”

Asked how long he had been with the Village precinct, he said, “One day.” He was formerly with Patrol Borough Manhattan South.

Asked who ultimately was giving the order to keep the park open at night — the mayor or Assistant Chief Stephen Hughes, the head of Manhattan South — Piezana said he could not answer that and that further questions should be directed to the Deputy Commissioner of Public Information.

A D.C.P.I. spokesperson, speaking early Tuesday morning, repeated what D.C.P.I. has been saying about the park’s curfew enforcement — or lack of enforcement.

Asked if the mayor is playing a role in whether the curfew is enforced, he referred back to his comment.

Community Board 2 apparently is as curious as anyone about what is going on with the curfew situation.

Around midnight, Carter Booth, the board’s immediate past chairperson, popped by to check things out. He had heard the curfew was not being enforced.

He said a reporter in the park had put the word out on social media.

Speaking two weeks ago at the big police-community meeting on the park at Our Lady of Pompeii Church, Jeannine Kiely, the C.B. 2 chairperson, said the board supports the park’s rules being enforced.

Monday night, as the curfew loomed just minutes away, two guys on e-scooters suddenly started rapidly circling around the fountain plaza like a racetrack. Police didn’t do anything about it. They basically seemed not to be engaging. As word got out that the park would not be closed this night, the police numbers in the square appeared to drop.

A little earlier, an unusual sound in the square, at least nowadays, could be heard: an acoustic guitar being softly strummed. Shirtless in the muggy heat, Sam Leal, 23, sat playing some “light bossa.”

Usually, he said, because Washington Square Park is “very loud,” he plays instead in Union Square, Bryant Park or Coney Island. But he had been passing by this night and noticed how quiet the park actually was for once, and so came in with his guitar.

“It was eerily quiet,” he said. “Do you know the show ‘The Twilight Zone’? There’s an episode where they come out into this empty town.”

Leal moved to New York from Arizona in January to pursue music. He had a job doing test-and-trace for the city but that ended and now he’s homeless.

“And I’m happier than ever,” he said, adding, “I’m gonna try to knock out a few more songs.”

Nearby, Edmund Leary a.k.a. “Uncle Bubbles” was packing up his wands and soap buckets, about to head home. In the early 1990s, he produced “Informer,” Snow’s smash reggae-style hit, but then struggled with addiction and became homeless. He rebounded, though, with giant bubbles, which he loves making for kids. He didn’t see what the big deal was about closing the park.

But two women, both 21, sitting on the lip of the fountain basin were strongly against the idea. Students living “Downtownish,” they were unaware the police had said the park would be closed at midnight that night.

“I just think they’re stupid for it,” said Morgan. “Like they can’t just let people have fun. This is just a place where a lot of people come to celebrate Pride.”

They had been in the park at previous late-night gatherings that were huge.

“It was a very nice community feeling,” Morgan said.

“Months ago it was so packed in here,” Jessica recalled. “People were hanging out and talking and some people were selling clothes that they made. Yeah, nothing too crazy. … This is a central park, not Central Park, but centrally located for people to come to.”

Told that people living around the square, especially on the north side, are upset about the late-night bashes, they were unsympathetic.

“I have a bar right across from my apartment,” Morgan scoffed. “They’re screaming drunk at all hours.”

Jessica also felt a curfew was pointless because the urge to gather can’t be quashed.

“They’re not going to get rid of the scene,” she said, “they’re just going to move it somewhere else.”

At 12:45 a.m. the lights illuminating the arch were shut off. Was it maybe a new subtle strategy to get people to head home?