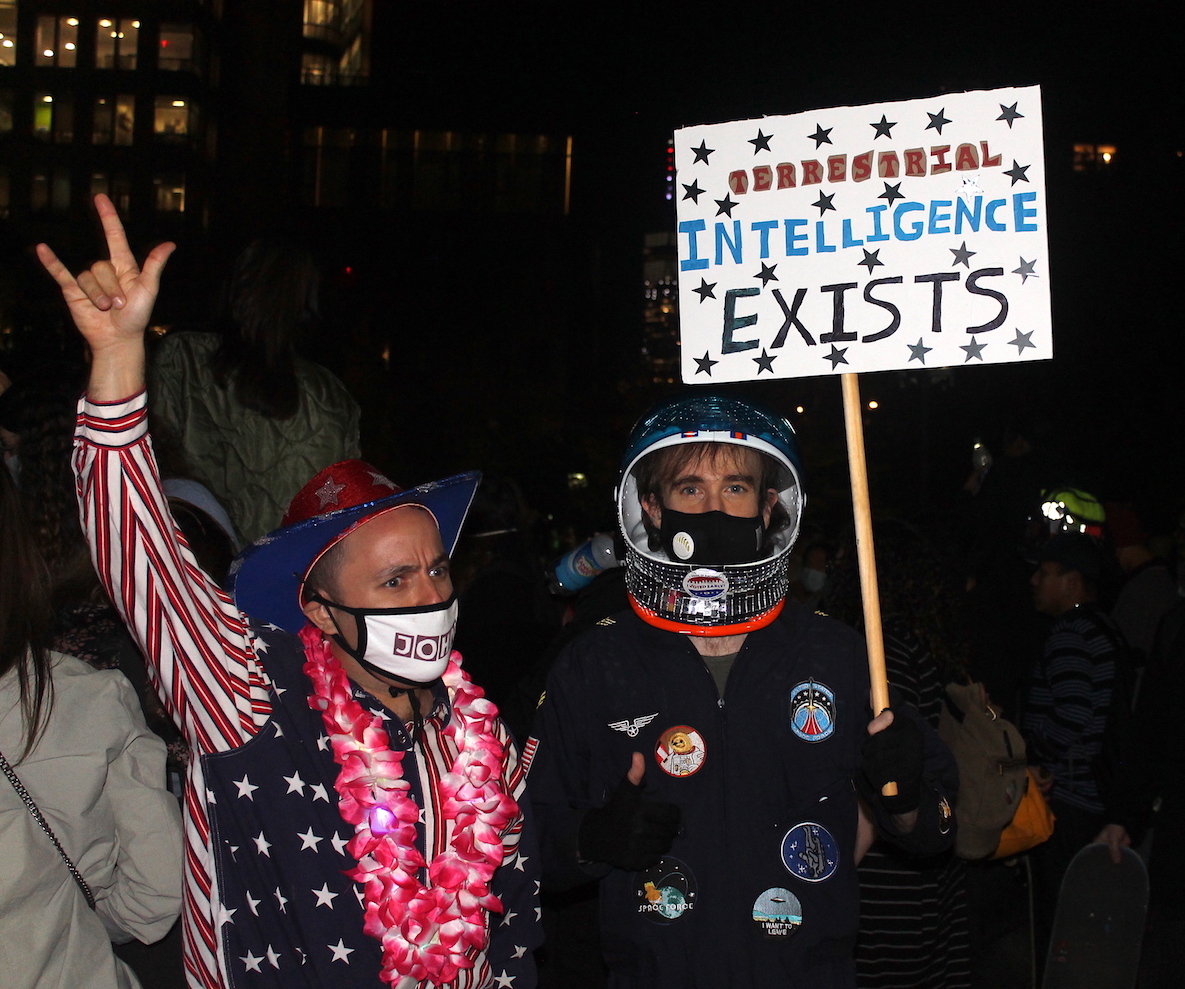 Partying in the park after Biden/Harris win, pandemic precautions be damned

BY LINCOLN ANDERSON | On Saturday night, New Yorkers “partied like it’s 1999” to celebrate Joe Biden’s victory in the 2020 presidential election.

In solidly blue Downtown Manhattan, Washington Square Park was the epicenter of a massive exhale — albeit with many people not wearing face masks over their mouths — to mark the end of Donald Trump’s White House reign. Earlier that afternoon, Biden had announced his win after Pennsylvania was called for him.

Now, after four long years, it was time for some good healthy fun. … Actually, maybe not that healthy, as the landmark park was packed tightly with thousands of young revelers, many of whom, again, were not wearing face coverings or had them hanging down below their chins.

During this past summer, a pandemic party in the park on this scale would have sparked an outcry of public condemnation. But, well…tonight was different.

A man with an electric keyboard led a mini-rave in a corner of the fountain plaza.

Near the fountain, four people hoisted plastic cups full of beer over their heads and clinked them in a toast to better days ahead.

Suddenly, an arm held up a Roman candle and out of it shot yellow, green and red stars zipping up into the darkness above the fountain.

Edward Flynn, 35, from Chelsea, was standing on a bench, an American flag outstretched in his arms behind him like a pair of wings.

“I’m actually from Ireland,” he said. “I came here five years ago. So I’m celebrating for the world tonight. America’s success is the world’s success.”

Asked about the scene in the park, the finance worker said, “People are letting off some steam after four years.”

Sam Vargas, 25, from Harlem, was hanging with friends by the fountain, holding a sign that simply said, “Bye Don.” He works at Mt. Sinai Health System where he is currently doing research on coronavirus.

“My main problem with him was the rhetoric,” Vargas said of Trump. “Every president has a chance to unite the country when we have a big problem. Wearing a mask… . He made wearing a mask a left-and-right issue, and that led to the whole division we’re going through now.

“If he had acted differently on the coronavirus,” Vargas offered, “he could have won.”

At the same time, the medical professional admitted of the huge park party, “I know that we’re not supposed to be doing this but it’s a special occasion. This is going to be a spreader event. At least most of these people are young and N.Y.U. students, so they’re far away from their parents.”

David Quaid, from the East Village, came costumed as a member of Trump’s Space Force. He said his family is fortunately no relation to the actor Quaid brothers, both Trumpites.

His sign, “Terrestrial Intelligence Exists,” apparently was an observation on American voters — or at least slightly more than half of them — for having the smarts to dump Trump.

One group in the park wasn’t kidding around, though. They had a harder, more political edge.

“Abolish ICE!” they cried, referring to the Immigration and Customs Enforcement agency.

Their opinion of Biden could be summed up by a song lyric from “Won’t Get Fooled Again,” by The Who — “Meet the new boss, same as the old boss.”

Beneath a Biden / Harris flag they had added the words “Next Top War Criminals.”

“The War Goes On,” one of their signs said, meaning their struggle against the powers that be.

“The real winners tonight are Goldman Sachs and the insurance companies! F— that!” a woman in the group shouted.

A bit later, finding solidarity, a bunch of trans women of color also held forth in front of the anti-ICE group’s banner near the arch. One of them, giving her name as Qween Jean, said much work remains to be done, such as on housing.

“We are not interested in your shelter!” she thundered. “We need housing.

“What are you doing to contribute to gentrification?” she challenged her listeners, also urging them to help employ black people. Our society will not be just until “trans women have privilege,” she declared.

Qween Jean concluded by raising her fist and leading the crowd in a chant of “Abolition! Now!”

Anna Oakes, 25, from Chelsea, was listening supportively to the trans activists. An Internet radio broadcast producer for a nonprofit covering food, she was soaking in the historic night. But she agreed with the speakers that challenges still lie ahead.

“It’s pretty exciting,” she said of the heady moment in the park. “I think so much work needs to be done. I voted for Biden, but he’s not even close to where we need to be. I voted for Bernie in the primary.”

Around 11:30 p.m. in the park, as the music got louder and cheers rippled through the crowd, things only seemed to be getting started… .

Meanwhile, earlier that night in the East Village, Tompkins Square Park was pretty tame compared to the mob scene in Washington Square. There was the usual pandemic disco party, complete with a light wall, under the Hare Krishna Tree — but it seemed a little less mellow than usual, given the Biden / Harris victory vibe.

Things were livelier on St. Mark’s Place between First and Second Aves., where people danced ecstatically on big a second-floor balcony as amplified music blared over the street.

A block to the west, near Third Ave., a brass band loudly performed in the roadway as a crowd gathered around. The musicians played Justin Bieber’s bubblegum-pop song “Sorry,” which sports the refrain “Is it too late to say I’m sorry now?”

After the tune ended, a woman with a megaphone assured Trump that — yup, it’s too late to say sorry.