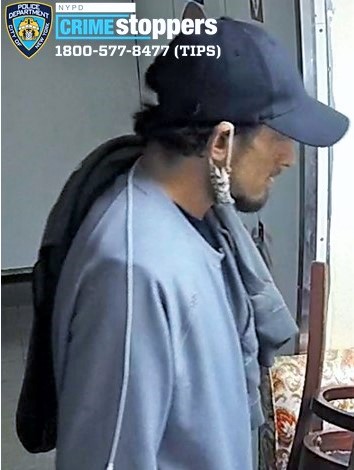 Police are asking for the public’s help in tracking down a burglar who hit a Chelsea restaurant and two Village residential buildings last month, stealing computer tablets and packages.

According to cops, in the first incident, on Wed., June 2, around 10:30 p.m., a burglar entered a restaurant at 101 Seventh Ave., at 16th St., during business hours and stayed there until after it closed. He then swiped two tablets and around $50 before fleeing in an unknown direction.

In the second incident, on Thurs., June 10, around 4 a.m., the same guy allegedly broke into a residential building at Carmine and Bedford Sts. by prying open the door. Once inside, he removed multiple packages from the lobby and fled.

Police said the man struck again the next day, again around 4 a.m., entering a residential building in the same area. Again, his M.O. was to pry open the door, then grab multiple packages from the lobby.

Police ask that anyone with information call the N.Y.P.D.’s Crime Stoppers Hotline at 1-800-577-TIPS (8477) or for Spanish, 1-888-57-PISTA (74782). Tips can also be submitted on the Crime Stoppers Web site at WWW.NYPDCRIMESTOPPERS.COM or on Twitter at @ NYPDTips. All tips are strictly confidential.