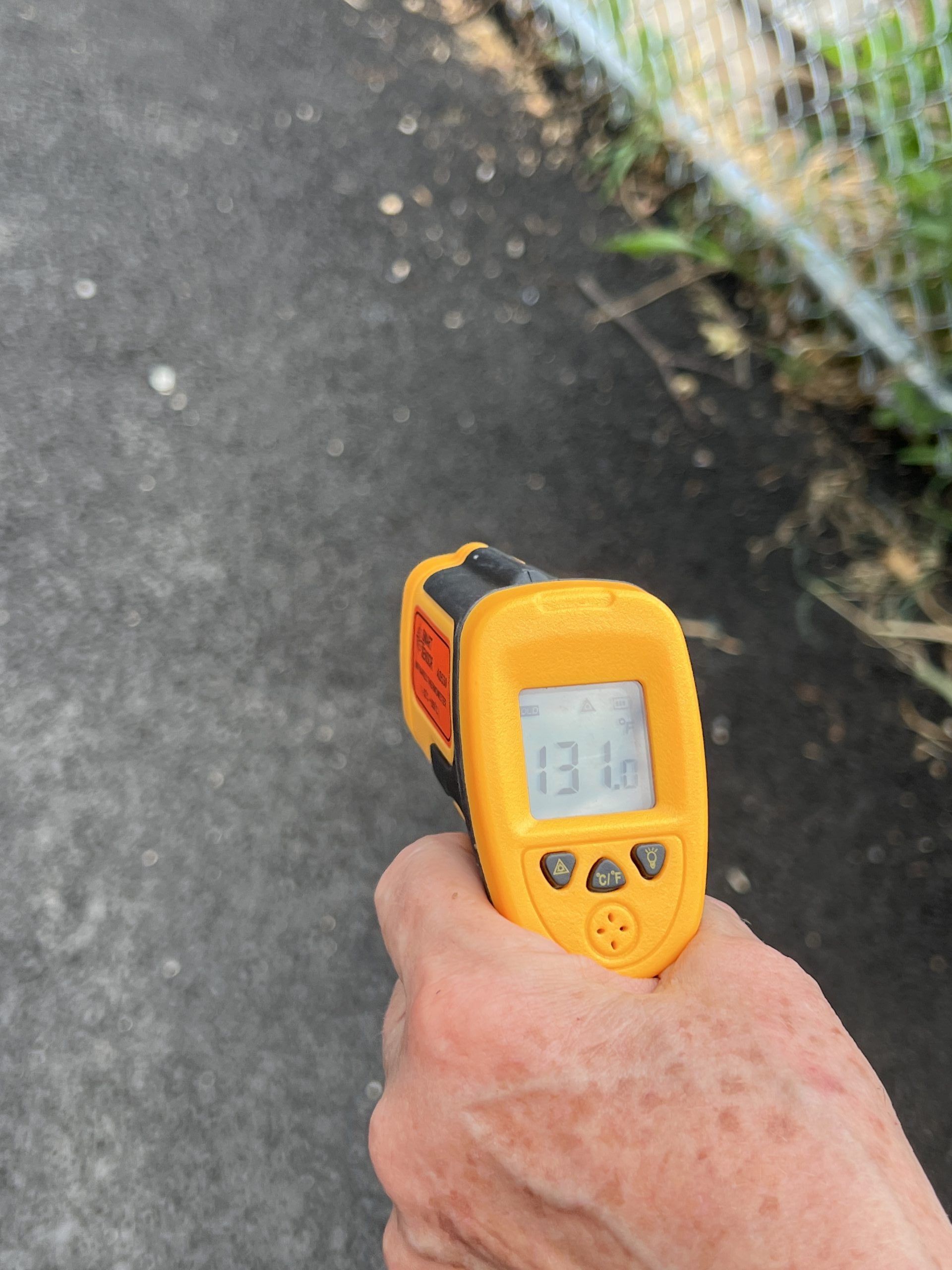 A hand-held infrared sensor reads the temperature of asphalt in the sun by the Sixth Street running track — 131 degrees on a 97-degree day. (Photo by Pat Arnow)

We started measurements at Corlears Hook Park because that’s where we could find grass and plantings and trees and get near construction work. We can’t get comparable measurements at the south end of East River Park because it is now mostly inaccessible and a hot mess. You won’t be surprised that the few spots of grassy shade were cooler.

There are severe public health consequences to making our neighborhood hotter and drier, which is what has happened now that we have lost some 700 trees. There are also remedies. Here is evidence that can help you make the case for positive action.

How hot was it?

We went out at 2 p.m. and took readings until 3:45 p.m. when the air was 97 degrees. We used a Smart Sensor infared thermometer, which measures surface temperatures. We pointed it at many spots, including asphalt and the dry and sun-baked “passive lawn” that is the only available park space near the river at the park’s south end. Then we checked temperatures at the running track and field at Sixth Street, the grove of mature trees just south of the track and the artificial and real grass playing fields. We took more than one reading at many spots, as you can see from the variations in the chart below.

Temperatures ranged from 80 degrees in tall thick grass in partial shade to 157 degrees at the artificial turf field at the running track in full sun. Under the grove of mature trees in the park, it was still hot — 90 to 95 degrees — but cooler than the reported air temperature in the city.

What can we do now?

Start by demanding all street trees that have been promised to be planted in our neighborhood to be planted this fall. The city is not reliable about keeping promises. The original promise was 1,000 trees for Community Board 3 (the area adjacent to East River Park); yet the city decided Community Board 6 should get half of them. We need every one of those trees and more.

The city promised us extra street trees, in part, to make up for the loss of parkland during the East Side Coastal Resiliency project. Pester your public officials to get those trees planted. It’s a public health necessity.

See the city’s own Heat Mortality Report if you need evidence: https://www1.nyc.gov/site/doh/about/press/pr2022/heat-related-mortality-report.page

And if you want to learn more about the dangers of these crazy temperatures, look at the National Weather Service New York’s Excessive Heat page: https://www.weather.gov/okx/excessiveheat

We also need maintenance for street trees that we already have. You can help directly with that. You can take stewardship training — see http://nycgovparks.org/reg/stewardship — and take care of your block’s trees.

It’s especially important to note that young trees need watering and respect — be gentle, it’s a living thing. Help keep trees from being treated like a toilet, a trash can or a swing, and they will be shading the block and making air cleaner and cooler for decades to come. Every tree, every green space, every community garden could use your help. Your care will help New York City’s “natural air conditioning system.”

And tell the city to CEASE AND DESIST gratuitous tree slaughter. The city promised to keep 42 percent of the park open and usable. Every tree they cut reduces the usable park! This is unacceptable. Raise hell about it!

Get a real-time local reading on the heat, humidity and Particulate Matter 2.5 — small particles that can penetrate deeply into the lung and impair lung function — at https://eastriverparkaction.org/sensors/

We also tested green lawns in Battery Park and Wagner Park, yielding similar results: Longer grass and plantings along the edges of the lawns were coolest.

The shaded bike and walkways along the Hudson River were 81 degrees to 86 degrees. The unshaded asphalt path going toward the ferry in Corlears Hook Park was 110 degrees on the same afternoon.

The moral of the story: You get lower temperatures if you keep your lawns green and pair them with plantings and, most of all, with trees that provide shade.

Unless you demand better. Demand justice. Get our green spaces and shade. Don’t let city officials continue to leave us hot and hotter.

Sparse shade in the remains of East River Park means that temperatures in the former oasis are dangerously high. We need remedies.