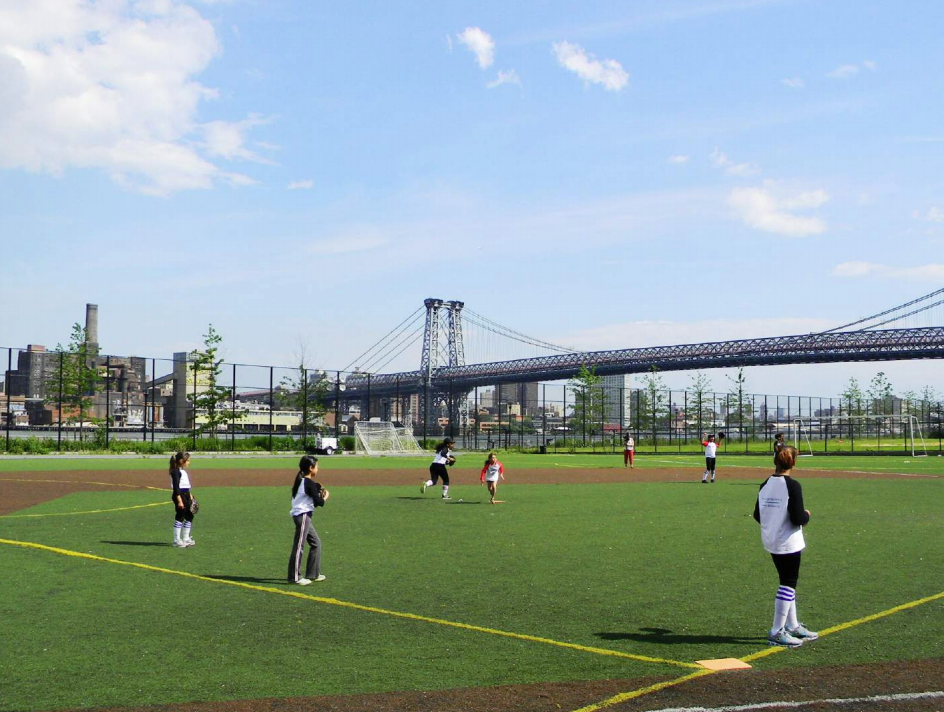 The existing East River Park, including its ball fields, along with its natural habitat, is a major community asset for the East Village and Lower East Side. (Courtesy Rebuild by Design/Trust for Public Land)

BY MATTHEW C. ESHED | New York City has signed a death sentence for East River Park. That is, unless the East Side Coastal Resiliency Plan includes an engineering design requirement that the existing ecosystem not be destroyed.

In fall 2018, the East Side Coastal Resiliency plan was “bait and switched” from one that protects the ecosystem to one that destroys it. This approach, set to go into motion later this year, commits the fatal error of destroying an existing ecosystem in the name of climate resilience. New Yorkers, particularly East Villagers and Lower East Siders, many of whom are low-income, deserve an East Side Coastal Resiliency plan that is integrated and constructive. What’s more, during a pandemic, abundant green space and its many health benefits must be protected.

In May 2019, the New York City Council passed a resolution declaring a climate emergency, stating, “Climate justice calls for climate resilience planning that addresses the specific experiences, vulnerabilities and needs of marginalized communities within New York City, who must be included and supported in actively engaging in climate resilience planning, policy and actions.”

Leaders have a responsibility to adapt the E.S.C.R. to comply with these climate actions, and a design requirement to protect the ecosystem does just that.

Despite resistance from the East Village and Lower East Side community for the last 18 months, New York City has forged ahead with this destructive design, doing the opposite of what the C.L.C.P.A. and the climate emergency declaration requires.

In the resiliency plan’s path of destruction are 1,000 trees of 70 species, a habitat of at least 200 species of birds, fish, insects, plants and other park wildlife, such as squirrels, to be buried under 8 feet of landfill, with a new park built on top (Citizen science data from iNaturalist shows 500 species.)

All the while, the community has been sidelined, and their protests ignored. The people in charge have made it clear that they don’t care about the C.L.C.P.A., the climate emergency declaration or the emissions impact of destroying a mature oxygen-giving ecosystem and bringing in hundreds of thousands of cubic yards of landfill.

We can, and we must, use our human ingenuity to design flood protection that works with the existing ecosystem and the communities who live around it. The justification for such a design approach is clear: The existing ecosystem is mature, and the park itself is an extremely valuable asset that should not be destroyed. The process by which the city has moved to destroy the ecosystem has been opaque, wasteful and irresponsible. Visit the city’s Web page on the project and ironically you’ll see the mayor touting earlier versions of the plan. This misleads some of our neighbors to believe that the city does not intend to wipe out the entire ecosystem.

Let me reiterate: The current city plan wipes out the existing ecosystem, home to multiple pollinators, including the monarch butterfly and yellow bumblebee, a “high priority species of greatest conservation need,” according to the New York State Department of Environmental Conservation.

This habitat is no accident or coincidence: Citizens at the Lower East Side Ecology Center have planted milkweed and other pollinator habitats along the 2.5-mile stretch of the East River, providing an environment for the insects that are important links in the food chain for so many. To wipe out this habitat to build a “new park” on top, is to assign their existence zero value, and demonstrates zero imagination and zero understanding of the importance of protecting pollinator ecosystems.

In addition, the greenhouse gas emissions of barging in 775,000 cubic yards of landfill and chopping down 1,000 mature trees will be measurable. A back-of-the-envelope calculation shows that 1,000 trees of 3-foot diameter and 40-foot height contain roughly 505,000 gallons of water and 239 tons of carbon dioxide (using formulas from the University of New Mexico).

New York City and its Department of Design and Construction have accepted a project that wastes valuable environmental resources, and looks very much “out of bounds” of the 2019 Climate Leadership and Community Protection Act. In addition, the C.L.C.P.A. requires working with communities to create good jobs, yet the city has done the opposite, sidelining the work of the community and ignoring their objections for the last 18 months. Most recently, the folks at East River Park Action live-tweeted the most recent Community Advisory Group meeting, showing support for a plan that does not destroy our park.

We can also approach this from a COVID-19 angle. A recent Harvard University study found that air pollution is a mortality factor for COVID-19, reporting that “an increase of only 1 μg/m3 in PM2.5 is associated with an 8% increase in the COVID-19 death rate.” This shows us that we must not increase particulate matter (PM) in the air by digging up and burying the park under tons of dirt. Full stop.

East River Park and Stuyvesant Cove Park are critical refuges for people, and are pollutant-capture systems. Moreover, overheating is a top climate-change health worry in New York City, and destroying tree-covered ecosystems will exacerbate the problem. The fact that the city is considering spending more than $1 billion to destroy these stretches of waterfront parkland — a critical asset — is an enormous blunder, especially in the midst of unprecedented budget deficits.

Local officials, including City Councilmember Carlina Rivera, the Parks Department and the mayor, have a fiduciary and social responsibility to protect the existing ecosystem, and they must advocate for flood protection that does not destroy that ecosystem. In fact, the “Natural Resources Survey” in the appendix of the Final Environmental Impact Statement for the E.S.C.R. says that the volume of bird calls “was qualitatively almost as loud as the traffic on the adjacent F.D.R. Drive.” That is an asset worth protecting in New York City, especially at a time when mental health is on the decline.

An engineering design requirement that the existing ecosystem be protected is a constructive approach that complies with the 2019 Climate Leadership and Community Protection Act, the City Council’s climate emergency declaration and the reality of living through a pandemic.

I encourage you to read the history, from the articles shared on eastriverparkaction.org to the testimony by state Senators Hoylman and Kavanagh and Assemblymember Epstein in September 2019 to the New York City Office of Management and Budget, in which they share the same concerns described in this op-ed. In short, this argument has significant community and legislative backing.

Please, take some time and come see our beautiful park. You won’t be disappointed, and I’m sure you will see the great potential it has, if only we have the imagination to see it. See you there.

You can also support the people doing this work at East River Park Action, a 501(c)3 nonprofit, by going to their Web site and making a tax-deductible donation today.

Eshed is a systems designer, engineer and entrepreneur working full time on climate innovation since 2016. A lifelong Stuyvesant Town resident, he believes that New Yorkers have a great opportunity to show the world what visionary climate innovation looks like. His latest venture is Climatetech Advisors, a next-generation sustainability advisory service and media company.