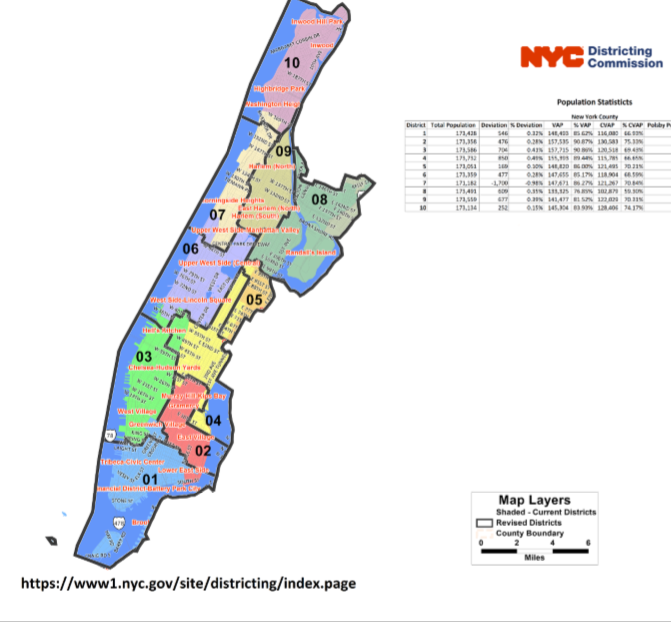 BY ANDREW BERMAN | Are you a resident of the West Village in Council District 3, currently represented by Erik Bottcher? If so, though you may not realize this, when you voted for City Council in 2021, your vote had 30% less weight than someone voting in other parts of New York City, such as Staten Island or Washington Heights, and you had 30% less representation, and less decision-making power, in the City Council.

If you lived around Washington Square or in Soho, Noho or parts of the Lower East Side, in Council District 1 (currently represented by Christopher Marte), your vote meant 20% less and you had 20% less representation and power than some of your fellow New Yorkers.

How can this be? It’s not a reflection on the two current elected representatives, but largely a product of the last redistricting of the City Council in 2013, under then-Council Speaker Christine Quinn. That process “packed” these two districts with more residents than other parts of the city, meaning each resident had less voting power, and less representation in the City Council, than in other parts of the city.

It’s a slightly less dramatic version of how the 580,000 residents of Wyoming get two representatives in the U.S. Senate, and so do the 40 million residents of California. This gives Wyoming residents 70 times the voting power and representation in the upper house of the U.S. Congress as Californians (and 34 times as much as New Yorkers), which is why the U.S. Senate is often referred to as the least representative elected body in the democratic world. And it’s a method regularly used to dilute or diminish the voting power of certain groups.

And because City Council Districts 1 and 3 were two of the fastest growing districts in the city population-wise over the last 10 years, that built-in inequality predictably only grew over the past decade, to the yawning gap of 20% to 30% in our neighborhoods, at which it now stands. So much for one person, one vote.

Now is the time to fix this profoundly undemocratic arrangement. Unlike U.S. Senate lines, which are set by the Constitution and inherently give each state equal power in the Senate regardless of population, City Council district lines are not fixed, and change every 10 years — supposedly to take into account changes in population. The City Council is once again undergoing its decennial redistricting, and the good news is the newly released, proposed maps largely correct this gross inequality.

Under the newly proposed plan, almost every district in the city has a less than 1% deviation from the average district size in terms of population. (The 2013 lines allowed for a 10% deviation, and subsequent population changes over the ensuing decade then greatly exacerbated that deviation.) The exception, inexplicably, is the three Staten Island districts out of the Council’s 51, which continue to be underpopulated (by about 4.5%), and therefore their residents are overrepresented compared to their fellow New Yorkers.

It should be noted that while district lines are supposed to cross boroughs as infrequently as possible, they can and do. And the new proposed lines, much like the old ones, do have cross-borough districts, as do our state Assembly, state Senate and congressional districts, thus obviating the argument for maintaining voter inequality for the sake of borough integrity.

Thus, the currently proposed maps are a giant (if imperfect) leap forward in righting this decade-old wrong of unequal representation. But they are not the final say. There are significant moves afoot to change these maps, to address other concerns about how the lines are drawn, in relation to keeping communities intact and giving adequate representation to communities of color and ethnic minorities. So the currently proposed lines are likely to change again.

No doubt there is room for improvement or accommodation in the proposed maps, to ensure all New Yorkers are as fairly represented as possible. What there should not be, however, is room to backpedal on the vast improvements made in the currently proposed maps in terms of eliminating the inequality of population, and therefore representation, in the City Council.

Adhering to a one person, one vote principle should be paramount, and further changes made in the maps should not in any way diminish or undo the enormous progress made in guaranteeing equal district size and therefore equal representation for all New Yorkers. If anything, further improvements can be made to reduce the inequality presented by the three underpopulated and overrepresented Staten Island districts.

The Redistricting Commission and elected officials are hearing from the public now about changes to the lines, and decisions will be made in the months ahead to finalize this proposal. As the commission and the Council work to address other concerns being expressed, it’s critical that we let them know that they must not retreat from the essential improvements made in these maps, in terms of the long-standing inequality of district size and representation for all New Yorkers.

Otherwise we’ll be saddled with another 10 years of some New Yorkers’ votes meaning more than others, and some communities having less of voice in the decision-making process at City Hall than others.

You can help by contacting the Redistricting Commission at PublicTestimony@redistricting.nyc.gov or by sending a letter to the commission and elected officials here.